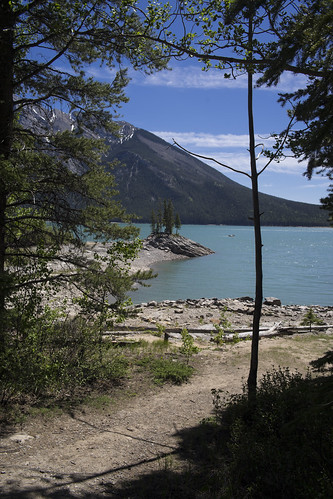 What pasts and presents we drown in pursuit of our futures.

Minnewanka is a name of a lake near the town of Banff, Alberta, Canada. I visited it a week ago for the first time in decades and walked a path on its shore that I don’t remember ever walking before. The path starts paved, then becomes well-worn dirt, and over its course gradually roughens as it traverses roots and rocks. Within a half hour you’re at a bridge over a small canyon, and then the trail climbs up to bend around the mountain and follow the farther shore from on high. Past a certain point you are advised to travel in tight groups in case of bears; hikers can continue to overnight campsites many hours of bootsteps farther on. But up to the bridge, it is well worn and friendly.

At the trailhead is a parking lot and a snack bar and a motorboat rental. You may, if you will, speed across its surface, a score of metres above ghostly streets where people used to walk and talk and kiss and eat. You may, if you will, strap on a can of atmosphere and dive down to look at a town drowned seventy-seven years ago, a town on a site where people had lived even ten thousand years earlier. See the video with this article from Smithsonian – you may find it spooky and wonder what waterlogged ghosts are over your shoulder.

There has always been a lake here, though it wasn’t always this big. A long, long time ago it was bigger, but glaciers and moraine rise and fall and so do lakes. By 1888 it was eighty feet down from where it is now, and a hotel and then a town were built on its shore: Minnewanka Landing. Fifteen years later, up the hill, a mine was started and a town of a thousand souls sprouted up there. It was called Bankhead and had a power plant that supplied power for Minnewanka Landing.

In 1912 a dam was built on the lake to store water for another power plant. In 1922 the Bankhead mine closed and its power plant shut down. A new power plant was built to replace it. The houses of Bankhead were mostly unmoored from their foundations and moved to nearby towns, leaving a cluster of concrete lumps in the woods for local schoolkids to visit on field trips and a small selection of buildings with interesting pasts mixed in with the others in Banff and Canmore.

But in 1941 there was a war on, and more power was needed. A dam was built across the end of the valley for a new power plant, and everyone in Minnewanka Landing had to leave. They didn’t get to take their houses. Fifty-three years a town, ten thousand years a place people passed through and sometimes lived, now a dim dreamworld like a far-gone childhood, walked in only by people long passed, seen from above darkly by the eyes of our time.

As we ever see other worlds darkly. Their sacred fabrics become burial shrouds. Look at the name of this lake. For a time, the European settlers called it Devil’s Lake. Beyond its end is a place called Devil’s Gap (now also the name of an establishment in the town of Banff where you may buy bites and spirits). A sign near the snack bar will now tell you that Minnewanka comes from local Native words meaning ‘spirit lake’. One website I found declares it’s from “Minn-waki (Lake of the Spirits).” But that’s not quite it.

How do I know that’s not quite it? The local language it’s from is Nakoda, or (in settlers’ terms) Stoney. That’s the language of the people on whose land I grew up. It’s a language I don’t speak, alas – but my dad does, quite well. So I asked him. The name of the lake in Nakoda is mînî wakâ, which means ‘sacred water’. The circumflexes indicate nasalization – the sort of thing you hear in French and Portuguese when an nor mis written after a vowel. So mînî, which means ‘water’, has nasal vowels, and wakâ, which means ‘sacred’, has a nasal vowel just at the end.

Did you catch that? If it were wâka it would sound like “wanka” to English ears, but it was wakâ, more like “walk on” without fully saying the n. We’ve shifted the sound. Just as we’ve shifted the sense, from ‘sacred’ (a fluid quality) to ‘spirits’ (individual beings) and then, for a time, because we feared the spirits of the people we invaded, to ‘devil’. We forced it with our own constructions just as we forced the water when, in one of our wars, we stopped it from flowing freely and used its holy fabric to shroud the ghost of a town because we wanted power. 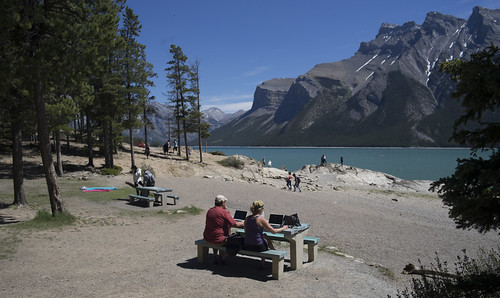 One response to “Minnewanka”