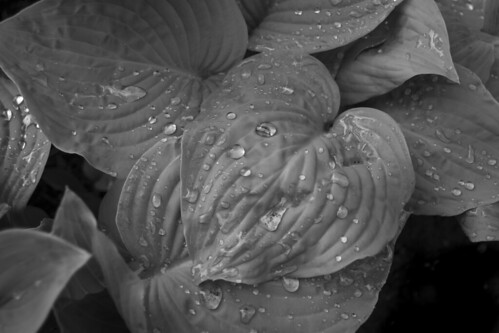 I love words. And I love plants. But for some reason, I really suck at remembering words for plants. This may be for the same reason that I have trouble remembering the names of people I meet (or have known for even quite a long time). Which may be for any of a host of reasons.

It’s not that I’m hostile to them. Quite the opposite. Every afternoon, I go sit in a coffee shop (a different one each day) to work, because it’s hard for me to get through a day without having people around me, just as I don’t like going through a day without going somewhere where there are plants around me. I enjoy their presence. They’re nice to look at. But I don’t talk to them much. Not the plants, either.

So what do I do when I’m at a party, for those many times I’m not talking? Same thing as I do when I’m in a garden: I bring a camera. Some silly person once said a picture is worth a thousand words. I think this is true just in the sense that every picture I take obviates a thousand words of talking. But there’s no actual conversion. If I put a Warhol print in your kitchen cupboard I don’t expect you to eat it. Look, I know words, and I love words, but I also know and love visual arts, and I know the limits of words. And I know how nice it is to have a friend you can sit with and not talk because you don’t need to fill the air with verbal packing chips because you’re just there together. 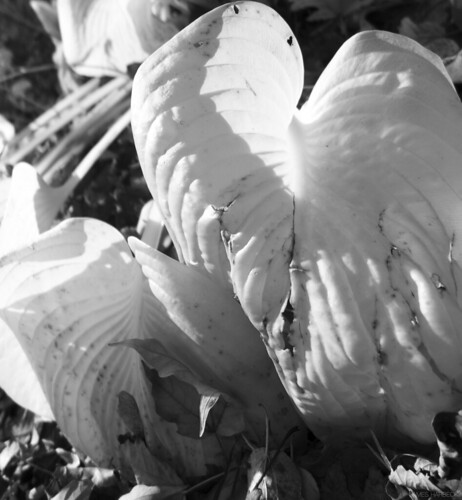 Even when I’m a host of a party, I don’t need to spend all my time talking with people. I’m happy being not a wallflower but a leaf in the book-garden of the event. A leaf with a camera. Taking nice pictures of nice people, often in marmoreal monochrome to bring out their lights and shadows, with life shining on them like dewdrops on leaves.

And so, too, plants. I love green, so you might think I would always take pictures of plants in colour. But there is one plant of which it turns out I have always put my pictures in monochrome to bring out its lights and shadows. True to form, I didn’t actually know what it’s called until, yesterday, I asked some friends. It’s a hosta, they told me. 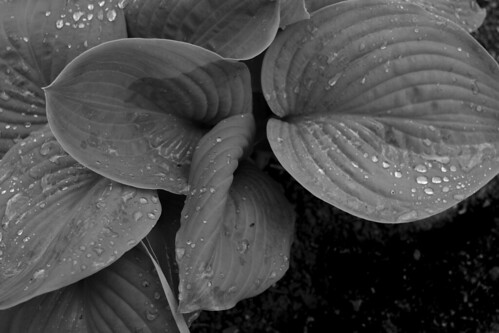 The hosta is not one type of plant. It’s a whole host of them: it’s a genus of which there is an uncertain number of species (botanists disagree) and more than 3,000 cultivars. The website of a local greenhouse offers me 233 different kinds. They’re all lovely. And many of them are named after people: Abby, Allan P McConnell, Amos, Amy Elizabeth, Andrew, Barbara Ann, Brother Stefan, Captain Kirk, Diana Remembered, Empress Wu, Frances Williams, Hans, Katie Q, Lacy Belle, Lady Isobel Barnett, Lakeside Meter Maid, Lakeside Shoremaster, Leading Lady, Margie’s Angel, Marilyn Monroe, Mr. Big, Paul’s Glory, Queen of the Seas, The King, The Queen, Veronica Lake… It’s like a whole party right there. And an interesting one at that. I wonder who would host it. 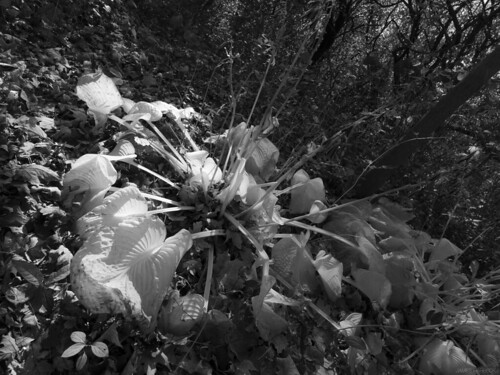 It’s tempting to think of N.T. Host as the genial host of a party of plants, and perhaps he was, but that’s not where his name came from. Our English word host traces to Latin, while the German and Austrian family name Host is apparently a toponym: there are villages by that name. Alas, my etymological resources run out of words at this point, and so I don’t know just how the villages came by the name.

But it’s OK. Not everything has to have a lot of words. Especially things that aren’t in a hurry to use them back to you. Hosta leaves have such a beautiful play of shadow and light, and they host raindrops and dewdrops so nicely, shining on them like life. 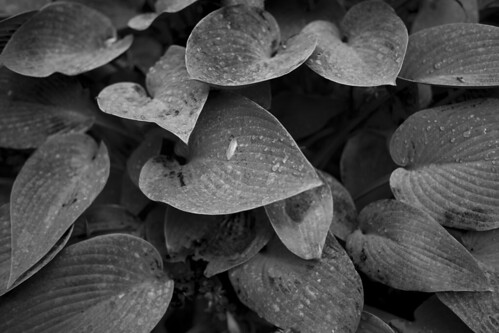