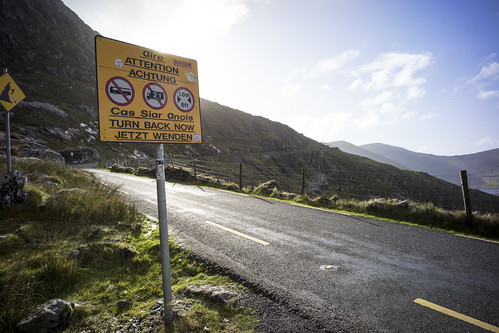 You know you’re in Ireland. You’re on a shoulderless one-lane road pasted to the side of the greenest cliff you’ve ever seen and somehow you’re still driving on the left. And the signs (such as the one telling large vehicles “TURN BACK NOW”) are in Irish first (“Cas Siar Anois” – for the curious, you say that like “cuss sheer a nish”), and you know you’re in the Gaeltacht (the Irish-speaking region) because some of the signs are in Irish only. Which can be a bit of an uphill struggle for some people, especially when it’s the only way to get by.

But it’s OK really. Everyone speaks English, even the people who prefer Irish. And the drivers are not like North American drivers. You’ll get by OK. And you’ll get over the pass – the Conor Pass, An Chonair – and you’ll see, down there, a town with two names with a questionable relationship. One name is in English and the other is in Irish and each one names a thing you’re not going to see in that town once you’ve smoked your brakes and/or transmission snaking down that mountainside. 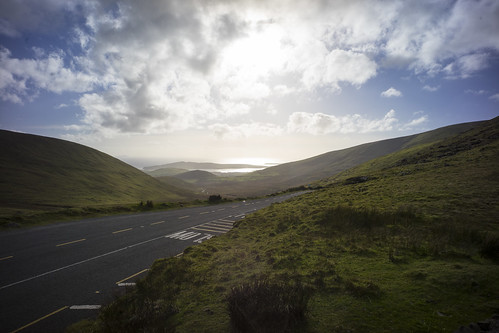 Welcome to the particularly cute town of Dingle. Also known as An Daingean, or, in long form, Daingean Uí Chúis. 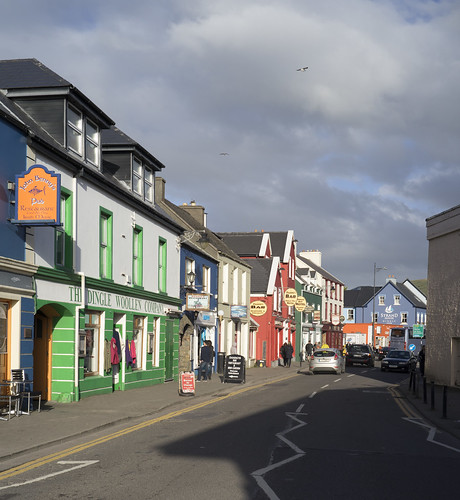 A tangent, for a moment, on the word cute. In Irish English, it can be used as we use it in Canada and the US, to mean a particular kind of diminutive attractive, but it can also mean clever, tricky, crafty, deceptive. The town of Dingle is cute in the first sense. The name of the town is cute in the second.

Dingle, as anyone you ask who has some reason to know will tell you, is the English version of Daingean. But there’s a little problem with this. It’s not an obvious phonological transformation or adaptation. If you go through Ireland, you will see every town has a name in Irish and a name in English, and the English is nearly always a plodfooted stuffing of the Irish into English phonology. Cill Áirne? Killarney. Tiobrad Árann? Tipperary. But the obvious handling of Daingean would be Dangan, especially since that’s basically how you say it. (The An, pronounced “un” or even just “a,” means “the,” but hold on for a moment.) Yet for centuries and centuries the English version of the name has been Dingle.

Yes, for that long. The town has a nice harbor and, being as it’s on the southwest corner of Ireland, it was a trading centre of some note with France and Spain even in the 13th century. 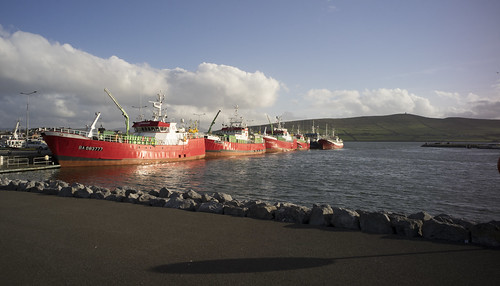 The thing is, Dingle is an actual English word. As in Anglo-Saxon. It may have a familiar ring, but it has nothing to do with bells; it means ‘valley’. But wait! Not just any valley! It means a deep, narrow cleft. It has come to have the sense of a wooded notch or a cozy dell. It came originally from a diminutive form of a word meaning ‘dungeon’ or ‘pit’.

Did you see the picture? Dingle ain’t no dingle. But it seems that the Irish name was replaced with an English word that seemed close enough and was maybe in some little way plausible. But it’s a clear replacement in sound and sense.

Daingean, you see, does not mean ‘dingle’. It means ‘fort’. OK, a fort and a dungeon have something in common, especially since daingean looks so much like dungeon and can also mean ‘stronghold’ or ‘keep’, but it’s still not quite the same thing.

So An Daingean is The Fort.

Maybe there’s a fort somewhere in Dingle but I managed not to notice one. Just a lot of cute shops (some in one sense, some in the other).

Well, we know whose fort it was, anyway. Maybe. Remember the longer form of the name? Daingean Uí Chúis? (By the way, that’s said like “dangin’ ee khoosh.”) That means Fort of Ó Cúis (oh, incidentally, Ó is an Irish preposition meaning ‘from’ and in names means ‘of the family of’; Uí is the genitive form of Ó, yes, that’s right, an inflected form of a preposition, just have a Guinness and accept it). Apparently Ó Cúis was an Irish chieftain a long, long time ago. Or… actually, maybe it’s really an Irish version of the Norman family name Hussey. In which case the town is Hussey’s Fort.

Still and all. No fort. No Husseys. No dingle.

And, for a time, no Dingle either. Ireland is invested in preserving and promoting its Celtic heritage and its indigenous language, and in particular in the Gaeltacht, where there’s extra government funding to help support Irish language and culture, everything is Irish first and sometimes Irish only. Although the two names of this town existed side-by-each for centuries, the English name is the better known of the two, and the town draws a lot of tourists (see above about cute; also it’s been in movies) so Dingle is a bit of a brand. But in 2005, the name of the town was officially made Irish only, and so were all the road signs.

Which concerned residents somewhat. Not that they wouldn’t know what to call the town. Just that the tourists who were looking for Dingle might not find it. (By the way, there’s an easier way to get to it, a less vertiginous road that has two narrow shoulderless lanes all the way just like nearly all the main roads in Ireland.)

It’s OK. They made it law in 2011 that the town has two official names, Dingle in English and Daingean Uí Chúis (or An Daingean for short) in Irish. And Dingle is back on the signs. So people who are looking for it will find it.

Just as long as they’re not expecting to find an actual dingle. Or a fort, with or without Husseys. We hope they’ll be satisfied with cute souvenir stores and no shortage of Guinness opportunites, just like in the rest of Ireland. 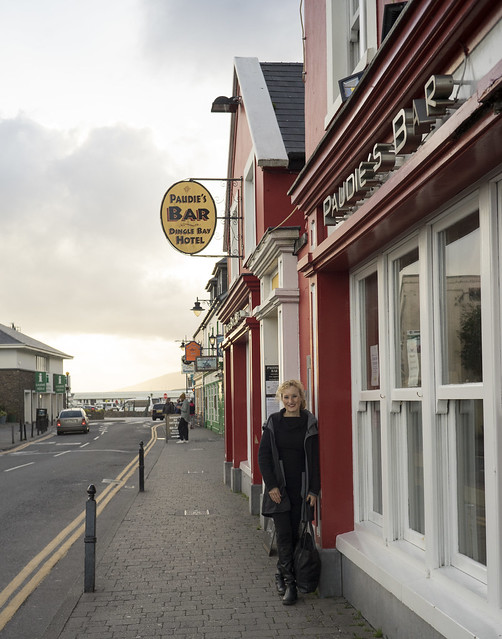