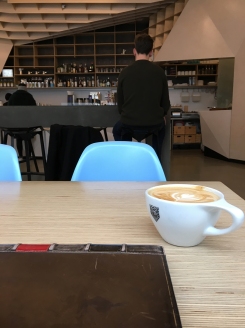 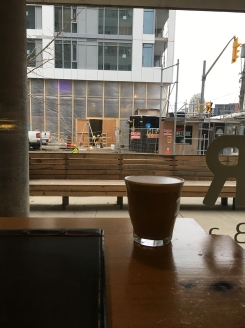 Listen to this coffice space review, complete with ambient background sound, for free on Patreon

The bottom of the heart of central Toronto is guarded on either side by two Norse gods so important each has a workday named after him: Odin and Thor. On the east side, on King by River Street, is Odin, the god who gave us hump day (Wednesday is Odin’s day, by way of another version of his name, Wotan). On the west side, on Bathurst at Niagara – two blocks south of King – is Thor, the god who gave us Thursday.

Each god is represented by an eponymous coffice space.

Yes, of course the two are owned by the same company. Go into Thor and you’ll see a stack of cardboard cup sleeves with Odin branding.

The resemblance stops shortly after that. 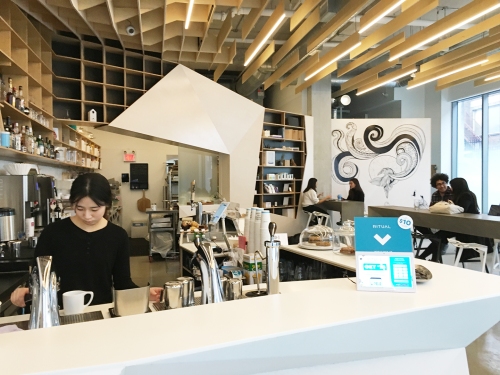 There is a lot of air in here

Odin, the god of the east side, is a large, airy space. The floor and counters are smooth, modern concrete. The stools are apparently made from elbow joints from very large sci-fi robots. The four tables by the big window are plywood cut sideways to show the layers. There are pale blue plastic bucket chairs fit for a Scandinavian schoolroom. The large espresso bar, which also has a draft beer bar, is framed by a wall of many wooden cubbyholes and white angular panels that look like a cross between Battlestar Galactica and white chocolate. 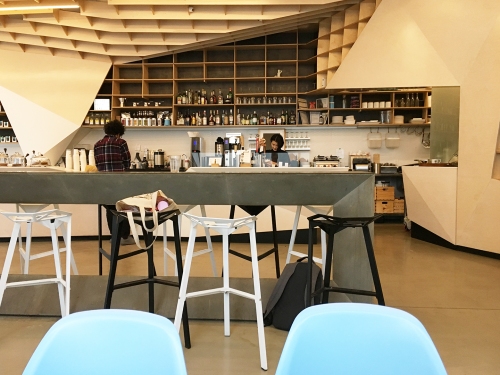 Not so modern that you can’t get a drink

There’s enough seating in here for 32 people (not enough plugs, though). There’s a micro-patio outside one corner, if it’s summer and you want the atmosphere of King and River. The bathrooms are just as completely modern: four separate unisex stalls and a single wide unisex sink, all straight out of an architecture magazine. 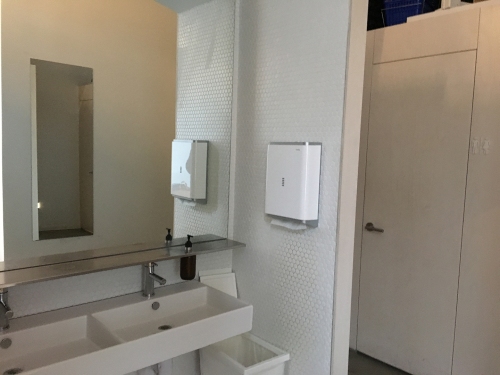 People come and go and can be worth the watching. The music is a suitable wallpaper and is just enough to generally drown out such conversations as may be nearby. The stools aren’t great for long-term sitting, but I did manage a couple of hours on one last year, my computer plugged into the wall. I’m better at the low tables… until my battery runs out. 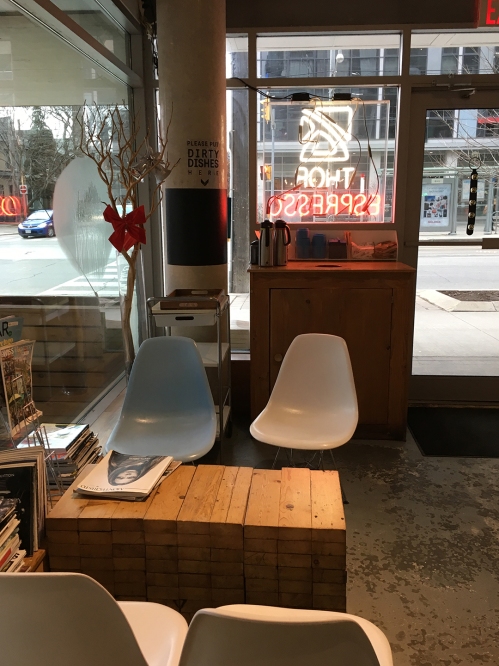 Thor, the god of the west side, is not large, not airy, and not quite so Scandinavian modern. It has four plastic bucket chairs around some stacks of two-by-fours pretending to be a table and a counter made of more glued two-by-fours along the window with six wooden stools that probably used to be black. The counter has four wireless charge spots on it. Wireful charge spots are not in evidence. The service counter is made of yet more stack-and-glued two-by-fours. The house deity is painted on the wall behind it. 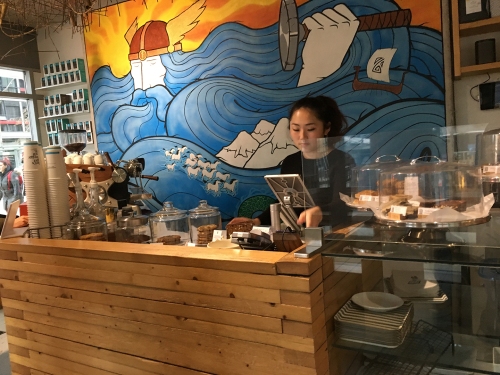 A sight for Thor eyes

Most of the rest of the place is concrete, but not smooth or lovingly cared-for. In the summer you can sit on their little patio on the Niagara Street side and enjoy the construction across the street, which will surely be completed soon enough. There is a single bathroom through a door at the back, on the level, but exactly as modern and spiffy as you would expect and no more. 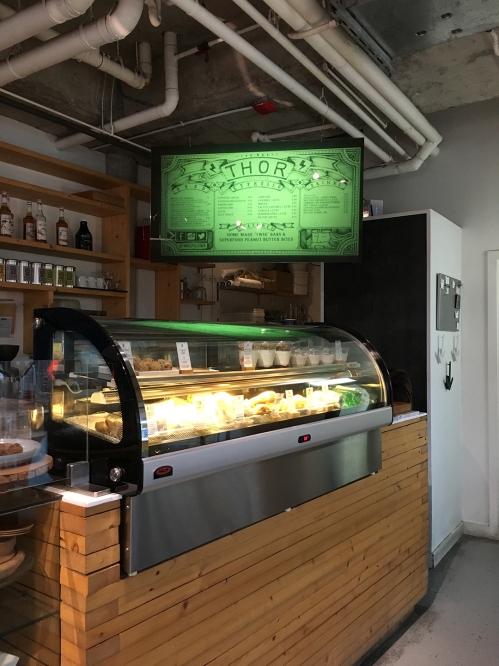 The coffee is good, though, and the music is not bad, and the place is not unendurably busy. I just can’t stay on a backless wooden stool for more than an hour or so.

You’ll probably choose the god that’s right for you. But if you want to worship at both temples to caffeine, just hop the 504B streetcar and cross the bottom of the heart of Toronto. It’ll take you about a half hour, depending on traffic. Or you can stop overnight halfway so you hit each on its dedicated weekday.

One response to “Odin and Thor”