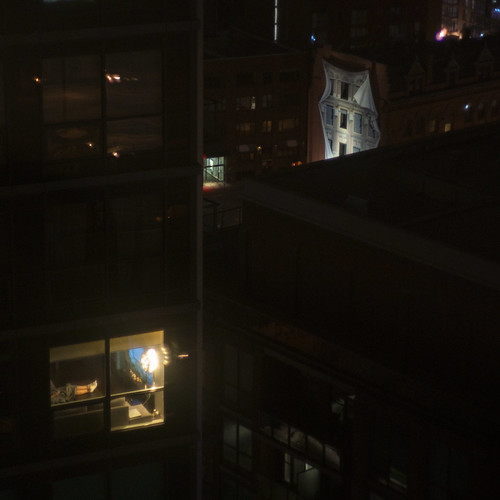 This word is at least partially adopted into English, but, frankly, I don’t want the English version. The English version uses only English sounds and I do not find “ga-moot-lick” to be a fitting sound for this word, or even for that matter not unpleasant to listen to. And “not unpleasant” is the heart and soul of this word. So it’s not a hollow “oo” in the stressed syllable, it’s that front round ü vowel, so much cozier and closer, and it almost forces you to purse your lips as if to kiss. And the final consonant is not a hard back “k” nor even the back fricative we know from ach; it’s the German “front ch,” as in ich, made with the blade of your tongue arching towards the ridge of your palate like a cat’s back arching towards your shinbone.

I first learned this word from German Made Simple, a book I bought in high school at the Banff Book and Art Den. Its chapters follow a certain Mr. Clark, who lives in a suburb of New York (going by the description, it must be a ways out, at least 40 minutes on either the LIRR or the Metro North) and who loves Germany and German things and the German language. In chapter 9 we get a dialogue between Mr. Clark and a certain Herr Müller about the city and the suburbs:

M.: Why do you like the city?
C.: In the city there are libraries, theaters, museums, universities, etc.
M.: There are also factories, warehouses, noise, smoke, and on the streets crowds of people who are running back and forth.
C.: Very correct. Therefore I prefer to live in the suburbs. Here life is quiet and comfortable.

There. You see it? Gemütlich is translated as comfortable. Though really it has an overlapping but not identical set of associations. It could equally be translated as cozy, snug, pleasant, or homely – or friendly, cheerful, or easygoing. And in origin it relates not to snugs or comforts or homes or pleasing or cheer or friends – not directly, anyway. It comes from Gemüt, which means ‘mind’, ‘soul’, ‘heart’, or ‘feeling’. You can take it apart further by plucking the ge off it (which is a derivational prefix) to get a root that is also the source of modern English mood. (Which is funny, because it’s not very gemütlich to be moody, and less still to be in a cozy space with someone else who is moody.)

But, if you don’t mind, I would like to take issue with one thing Mr. Clark (if that’s his real name) says. He prefers the suburbs because life is “still und gemütlich,” by contrast with the city. I won’t argue the point over “still” (well, except for when there’s a pandemic lockdown, and even then the city is less quiet than the country, though probably not than the suburbs – for one thing, there are no lawn mowers in high-rise neighbourhoods). But gemütlich?

Listen. I’ve lived in the country, and I’ve lived in small towns (such as Exshaw and Banff, Alberta), and I’ve lived in the suburbs (in newer cities – Calgary, Edmonton – and older – Medford and Somerville, suburbs of Boston), and I’ve lived, and live now, right downtown. I associate many characteristics with the 4500-square-foot house we lived in at the foot of a mountain, but gemütlich is not one of them. A small town can be gemütlich, but it can also be a bit stifling; I’m not sure if feeling like everybody is always up in your business is really cozy, friendly, charming, comfortable, et cetera. (I mean, you do you.) A suburb, cozy? Let’s see. You’re in a house that may be small or large but probably has at least two floors and is certainly homey and all that, and maybe you’re on a cul-de-sac and it seems very comfy, but you’re also probably going to have to drive somewhere to do anything, and you’re in the middle of a sprawl of houses that would take a long time to walk out of. You’re far from the madding crowd, maybe, but you’re also where the madding crowd goes to eat dinner and sleep before heading back to mad some more the next day. It’s kinda cozy, but…

…you know what makes me feel most comfortable and safe and snug when I want to get to sleep? The sound of a thrashing rainstorm on my window. The contrast between outside and inside really makes me feel snug. And what makes me feel cozy and warm and calm and gemütlich is, in part, having a thousand square feet of calmness full of books and music right in the middle of the city, where I can look out my window and see the madding crowd (when there is one) and at the same time not be in it. I could go down and be on the street in the middle of everything – there are two theatres a two-minute walk from the door, and grocery stores only twice as far, and all those other city things too, including hospitals should I need one – but when I don’t choose to, I am as snug as a bug in a rug, and embraced by the non-interfering presence of more than a thousand people within a hundred metres of me, all of them in home spaces equally gemütlich.

Sure, not everyone likes it. Different things for different people. But it suits my mind and it suits my mood.