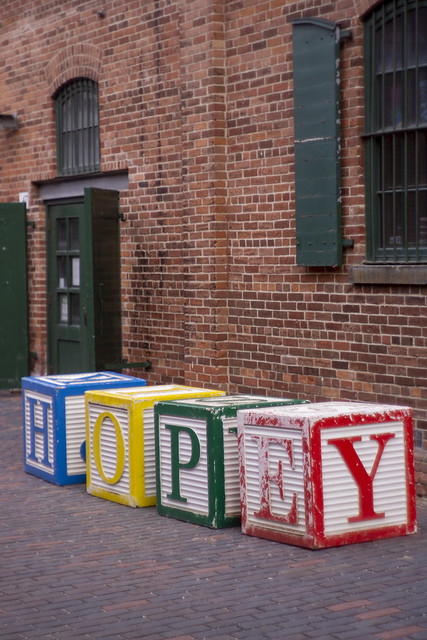 This word looks like it is to hope as dopey is to dope, or as happy is to hap (which, if you’re not sure, is roughly synonymous with luck), or as snippy is to snip, or as jumpy is to jump.

But wait! We have a word hopeful. Why do we need hopey if we have hopeful?

Well, heck. Why do we have both cheerful and cheery? Why both lustful and lusty? Why both masterful and masterly?

And why both bountiful and bounteous, both joyful and joyous, both dutiful and duteous, both deceitful and deceptive, both lawful and legal? Each of these pairs of words could be covered by one word with a wider ambit of sense. Frankly, they’re used in overlapping ways as it is.

But why do you have so many different mugs in your cupboard? Why so many spoons of different designs in your drawer? Why so many functionally fungible belts or ties or scarves in your wardrobe? Why do I have both a chef’s knife and a carving knife, why do I have wine glasses of at least eight different shapes, why do I have almost a dozen 50mm lenses that can go on the same camera?

I mean, some languages get by with a spare, konmari-style vocabulary, while English gets by with a vocabulary that is as restrained, elegant, and tidy as the mansion of a millionaire kleptomaniac hoarder. But there’s always somelittle difference between words, even if just a subtle one of tone or form.

Don’t tell me you can’t sense a difference between hopeful and hopey. Heck, the rhyme with dopey and the echo of happy give hopey a distinct tone right away. Hopeful is a clear future-oriented state: you have an expectation, or at least a sense of probability, that some particular desire will be fulfilled. Hopey is more of… a mood, a general disposition. You feel good about how things are going. There was a lot of that when Barack Obama first took office, for instance (especially thanks to his famous HOPE poster). But any time you’re in a mood that’s the opposite of dreading or worrying…

Of course, we know the distinction between truthful and truthy. There is the risk of hopey leaning the same way, but don’t forget that truth is something that is conceived as externally verifiable, whereas hope is an internal state, and it’s harder to say how it would be faked. Maybe just weakened: “I wasn’t entirely hopeful… just hopey.” But that doesn’t contradict the more general sense.

Don’t bother pulling out (or surfing to) a dictionary to check what it says; you won’t find hopey in most of them. But it does exist as a word! You can find it on Urban Dictionary (I mean, yeah, you can find a lot of completely fake words there too, but…). And it has shown up in a few other places. I claim no invention. It’s out there. Can’t you feel it?

Doesn’t everyone want to feel hopey? If we can find a reason to?