Look at the large barge, sarge! Who’s in charge of the large barge? And what’s that sparged on its marge? Is that parge? Is it going to Canada Cement Lafarge?

Barges get a bad rep, but flat-bottomed boats make the world go ’round. Or anyway they make stuff go ’round the world. It’s known that to succeed in logistics you have to be a bit anal-retentive, but for many times and places (and sometimes still) you also have had to be canal-retentive. Many things are moved more smoothly over water than over land, especially because you can fit much bigger loads on a floating vessel than on anything that has to navigate road or rail. Take as example the construction materials and equipment I see cruising into the eastern entrance to Toronto Harbour nearly every early evening. 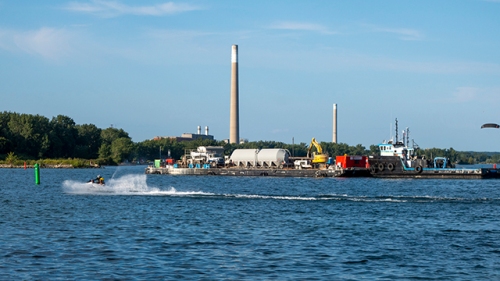 Should I say “barging into”? Well, it is a barge, being pushed by a… hmm, it’s not tugging, so it’s not a tugboat… well, a pusher boat, OK? But it’s where it’s supposed to be. Not like some personal sport watercraft ripping into the picture.

Does that seem fair? That if I’m taking a picture of a barge that I fully expected to be at that place at that time, and a Sea-Doo or whatever tears across in front of it, the interloper is said to be “barging in” while the barge is being all polite and invited? Why does a barjaun “barge on,” anyway?

Well, before there was barging in there was barging around and barging along and barging through, and barging into or barging against someone or something, and the sense was of bumping, of being big and heavy and inertious and unbrakeable just like a fully laden barge. Perhaps the kind of cad or bounder that a less bumptious person wouldn’t want to touch with a bargepole… which, by the way, is literally a pole used for keeping smaller canal barges from touching other barges or the shore or whatever (and occasionally for propelling barges, though really human musclepower is mostly not up to the task).

Where did this word barge come from? French, of course, like the other words ending in -arge, and French got all of them from Latin. But this ­-arge has a lot of cargo of many sorts from various origins: while large comes from Latin larga, and marge (as in margin) from margo, charge comes from carricare (cargo is descended from that too, but charge didn’t come by way of cargo), and sarge is short for sergeant, which French made from Latin servientem – that g just kinda… pushed its way in (it’s not the only time a “w” sound has been changed to or from a “g” sound). And while sparge comes from spargo, parge comes from French porjeter, from Latin porro plus jactare. There’s also litharge, via Latin lithargyrus from for ‘silver stone’, and targe from Latin targa, from a Germanic word – look them up if you’re curious. The name Marge takes us back to Latin Margarita, which in turn came from farther east. As for Lafarge, the name of a large cement company that does have a small facility in Toronto’s docklands, well, that’s a variant of La Forge, and forge traces to fabrica, because, well, why the heck not.

As to barge, it came by way of barga from late Latin barca (also the source of barque but not of bark), from earlier Latin baris, ultimately by way of Greek and Coptic from Egyptian (you can see the hieroglyphics on Wiktionary). All the way back, it’s all words for boats of various kinds. And there are still various kinds of vessels called barge, including ones that can be wind- or self-propelled, even big glamour boats for royalty rowed by peons. But mainly, these days, a barge is a big floating cargo platform. And regardless of where it comes from, when it’s loaded up, it goes where it’s going and will not be quickly diverted.