A Word Taster’s Companion: The long and short of it

Today: the sixth installment of my how-to guide for word tasting, A Word Taster’s Companion.

The long and short of it

There’s something you should know about long and short vowel pairs in English.

Oh, the short vowels are short. And they’re even slightly shorter before voiceless stops than before voiced ones (the [æ] in mat is a bit shorter than the one in mad, for instance).

And the long ones are longer. But not because they’re long versions of the short ones. “Long i” is not actually a long version of “short i,” nor is “long o” an extended version of “short o.” “Long a” doesn’t have any of the sound of “short a” in it at all. Same goes for “long” and “short” e. And u? Even worse.

Let me show you what I mean. Pretend you’re at the doctor and say “ah.” Say it quickly first. There’s your short a. OK, now say “aahhhh,” nice and long. There’s your long a: a long version of a short a. But it’s not your “long a” at all. You know what “long a” is: the sound in fate. But if it were really a long version of “short a,” you would say that word like “faat.”

So why don’t we do that?

Well, we used to. Then something changed.

English “long” vowels actually were long versions of the short ones centuries ago. But accents change over time, pronunciation of phonemes shifts, and there was a big change during the 15th and 16th centuries, a thing called the Great Vowel Shift. The long vowels all moved up in the mouth while the short ones stayed put. The vowels at the top couldn’t move any further up, so they became diphthongs starting lower in the mouth and moving up.

Does that seem stupid? Consider that in some versions of English (much Canadian English, for instance), the word stupid – which because of the vowel shift became like “styoopid” – is now back to a pre-shifted “stoopid.”

Meanwhile, the short vowels pretty much stayed put, resulting in these mismatched socks. Watch the zigzag your tongue makes as you say the vowels in bat, bait, bet, beet, bit, bite, in order. You might find it clearer if you say just the vowels and leave off the [b] and [t]. Now try them in the order of bat, bet, bit; bait, beet, bite.

Congratulations. You’ve had your tongue for how long? And you may just be getting to know its ways better now.

But why would this happen? Does it seem too strange for words? Well, in fact, changes to pronunciation keep on happening, everywhere, all the time. A language never stops changing as long as it’s in active use by people who speak it as their first language. The Great Vowel Shift is just the best-known vowel shift. There’s one in the United States called the Northern Cities shift that is in progress now and is responsible for the raised and fronted “short” vowels you hear from Buffalonians and others on and near the Great Lakes (why Ann can sound like “Ian” and gone can sound like “gan” to people from elsewhere). Think, too, about how people from the southern US often say their vowels – they’re different from the way Northerners say them even though way, way back in the mists of time all English speakers said them about the same way. Think about the “Canadian raising” I talked about in “Horseshoes, hand grenades… and phonemes”: eyes versus ice, loud versus lout.

And listen around for some other changes that might be more evident in some groups of the population than others (younger people, for instance) – such as a lowering that makes test sound more like “tast.” Listen for changes to consonants too, and differences between different speakers. The one constant in language is change. And sometimes that change can get pretty weird.

Next: on to consonants.

Look at these two pictures. They’re the same photo, of course. Do you detect a slight difference? Does the second one seem somehow… sharper than the first?

It’s had some sharpening applied to it. Not a massive amount, but enough to make a difference. It’s something that I often do after resizing photos, since sharpness is often lost in the process. And it’s something that a lot of digital cameras do automatically to their JPEGs so they’ll look, well, sharper.

How does it work? Here are close-ups (500% magnification) of details from the two. What do you see? 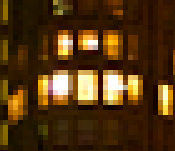 I’ll tell you what you see: increased contrast, especially at edges – that is to say, places where there is already some contrast. It’s not that every last dark is darker and every last light is lighter; it’s that near the places where dark and light, or two different colours, come together, the difference is increased slightly.

If you oversharpen a photo, it can looks pretty frickin’ bad. Like someone wearing really excessive lipliner, heavy eyeliner with heavy highlighter right next to it… 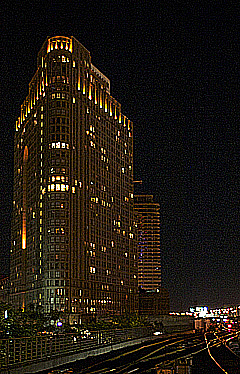 It’s just gone too far. But you know, when it works, it works for the same reason that lipliner and eyeliner work: our eyes (and brains) love not just contrast but edges.

Look at kids’ drawings (or the average adult’s, for that matter). If they draw someone in solid clothing on a solid background, do they just make two fields of colour? Or do they draw outlines (and sometimes just lines)? (Answer: the latter, natch.)

When the light comes into our eyes, and when our eyes send it to the brain, what we’re seeing is just colour next to colour. But we look for edges. We even fill i edges in places where we don’t actually see them. Part of that is coloured by real-world experience – we can identify a figure even when the contrast within the figure is greater than the contrast at the edges because we have expectations regarding the shape of the figure. But part of it is just that we are made to find edges and we like contrast. Clarity. It’s well adapted. It makes it easier to deal with the real world. We see what we see, but we think of it how we think of it.

This also applies to sounds. We hear a continuous flow of sound, but we are able to parse it into separate phonemes when we know the language. We also perceive different sounds as being the same if they fit into the same expected phoneme – and we can hear the same sound as different it is presenting different phonemes (for instance, many people will say both vowels in kitchen the same but hearers will still perceive them as different). I talk about this phenomenon – categorical perception – in “Nothing to chauffeur a classiomatic” and “oot & aboot.”

It also plays a role in another phonological process, one that happens not in the instance of production and reception but over time over large areas: vowel shifts.

Vowel shifts are when some of the vowels (anywhere from one to all, but usually a certain set in a mutualle affecting way) in a language, or at least one dialect of a language, come to be pronounced differently from how they had been before. Many languages have undergone vowel shifts, and they are still taking place – a thing called the Northern Cities Shift has been going on in northeastern US cities for several decades, resulting in Buffalonians sounding to Torontonians as though they’re saying “Ian has gan to the affice” when they’re saying “Ann has gone to the office.”

The causes of vowel shifts are much argued over and certainly not exceedingly clear to anyone. Some people even argue that what we think of as shifts are often not shifts but mergers and similar other movements. I’m not going to hazard as guess as to why shifts happen. But there is one thing that vowels in shifts often – not always, but with a certain frequency – tend to do: diphthongize. They become a movement from one vowel sound to another.

Not all of these happen in the same language – some are not too likely to happen together in the same language, in fact. Not all of these are found in English. But what they all have in common is that they heighten the contrast. They use a glide (“w”, “y”) or contrasting vowel sound to make the original sound stand out more, and they may also move the original sound farther in the other direction from the glide. A high and tight sound (“ee”, “oo”) may get a leap into it from a lower, more open sound (becoming “ay”, “ow”). It may happen the opposite way: a glide opens into the sound (“et” becomes “yet”). Or the sound releases out (“toll” to “to all”). Or it becomes two sounds on opposite sides of the original (“bat” to “bite”).

In a way it’s similar to what we do to some consonants when we emphasize them: add an “uh” after them, or at least a strong puff of air. Think of the Barbara Woodhouse style of dog training: “Sit-tuh!”

These are certainly not the only kinds of vowel shifts. Sometimes a vowel simply moves in one direction or another. In English, as I discuss in “An appreciation of English: A language in motion,” [a:] moved to [eɪ], [e:] moved to [i:], and [i:] moved to [aɪ], while [o:] moved to [u:] and [u:] moved to [aʊ]. The vowels at the top, not being able to move farther in the same direction as the others, added a contrast element to make them stand out. They emphasized their position at the top by the addition of a contrast from the bottom. The others just moved, maybe adding just a little bit of diphthongization.

It can go the other way, too. Sometimes a diphthong is even smoothed out into a single sound. Think of how southern Americans often say I: “Ah” – something that had become a diphthing has stoppped being one, but by deletion of exactly that part that was the original sound. There are always two opposing forces operating: ease of saying and clarity of hearing. The contrast effect wins out when there is need for a greater distinction of the vowel. Other vowels may have come to have sounds that are a bit too similar, for instance, so this vowel takes on a bit of sharpening. It’s sort of like a backswing that allows you to deliver a stronger blow. In golf, I mean, of course.

I won’t go into whether similar effects can also be discerned in other sensory input. But I have suddenly developed a strange craving for salty caramel…

An Appreciation of English: A language in motion

This is the text of a presentation I made at the Editors’ Association of Canada Conference in Vancouver, June 10, 2006. It came with a handout, “A brief history of English,” which is available as a PDF. It traces the history and development of the English language and the nature and function of language change.
END_OF_DOCUMENT_TOKEN_TO_BE_REPLACED