A song from my youth, when we first visited Disneyland. The Tiki Room was not an actual bar – hardly suitable for children, you know; it was an audio-animatronic presentation of tropical birds in a Polynesian theme. I believe it still exists, but in updated form.

Polynesian themes were a preferred exoticism of the mid-late 1900s. There was even a Grammy for Best Hawaiian Music Album. Home electronic organs had Hawaiian presets (ours did! I was very impressed). Ah, hulas, the tropics, palm trees, pineapples, wooden statues, and fancy drinks. Of course it was all a fantastic confection. It used adapted borrowings from other cultures to feed a fantasy. It was not simply idealized; it was idolized. And then fashion moved on.

Did it? To some extent, yes, but the idea persisted. The Polynesian Village Resort at Walt Disney World is still there, still themed in that Disney way with fantastic tropics in colour-saturated decay. Fancy umbrella drinks are still available in many places.

People want to think themselves world-wise and well informed, but they often seek sanitized, idealized, shrink-wrapped versions of wisdom: where before we sought the dim, hurricane-lamp-lit wooden rooms and heady sugary alcoholic beverages, now we seek serene beaches and refreshing massages and images of meditation and rejuvenation. It’s still a fiction, but one that pretends to enlightenment.

But some still like the old fiction. Of course now they know that it is a fiction. But it is an entertaining one. And now it’s really a throwback to a half century ago, with quotation marks on it. So we don’t endorse the reductionism, right? But we sure do enjoy the atmosphere and beverages. Tiki bars, it turns out, are a thing once again, at least in some places. The San Francisco area has several.

What is this word tiki? Does it seem a bit antique-y? Or anyway creaky? A tiki is some kind of wooden image or charm, we seem to recall. Is it one of those many statues of ancestors and deified beings that are associated with Polynesian cultures? In an extended sense, perhaps. But originally Tiki is the representandum of one particular class of statues, those representing a primogenitor, a first ancestor – a male one in particular. The word comes from the most southwestern Polynesian culture, the Maoris, who live in New Zealand. It has come to be adopted and adapted and Disneyfied by Americans, on the far northeast of Polynesia (Hawai‘i) and beyond.

So now it is a word that, in American English, bespeaks a certain kitschy pseudo-Polynesian style, especially one that involves dim bars with fancy cocktails. A tiki room doesn’t have audio-animatronic parrots. So what does it have?

A front door, for one, which is the limen between the honest constitutive quotidian reality and the fantastic escape within. Walk down Gough Street in San Francisco and you will pass a rather plain metal-and-dark-glass door with no sign other than a piece of paper announcing the hours of Smuggler’s Cove. Open it and push aside a black curtain and you are in a space smaller than you probably expected. There is a doorman. (“Do you have your IDs on you?” “Yes, we do.” They do not show their identification. He lets them pass.) There is a bar that you will need several seconds even to see. In case you had forgotten the term a dark-adapted eye, you may remember it now.

You peruse the menu. You order a drink from a fellow in a tropical shirt. 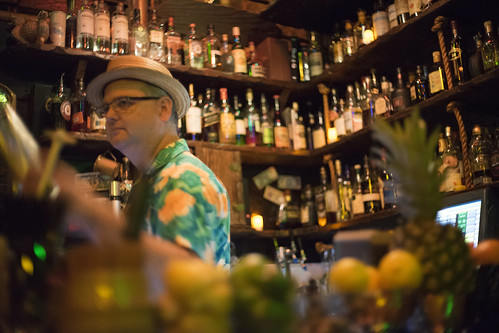 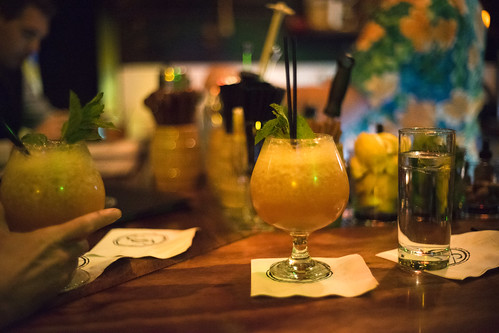 You go upstairs, to where there is still more decor. 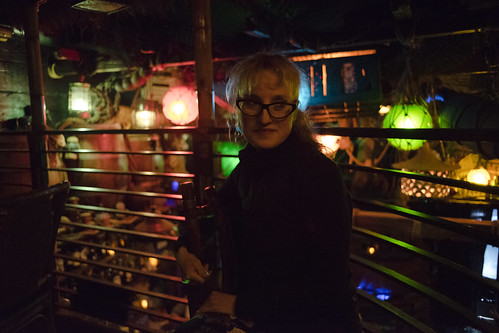 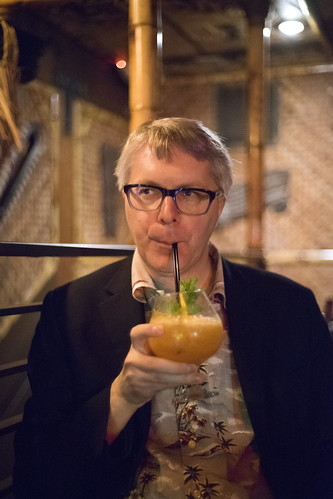