A few months ago I talked about the disconnects that resulted in – and from – the closure of the waterpark at Ontario Place. It was being taken down, dismantled. As the summer has gone by, I have seen it from afar, the stair tower standing forlorn, the water gone, the slides gone.

Yesterday I got to see it up close. I got to walk among the ruins. It was nostalgia; it was picturesque as ruins can be; it hurt to see it so, too – I can never quite be inured to loss. I wandered, ruing the decision that led to its ruin, remembering what it was a mere four years ago. It seemed so much longer gone than that. You will see.

Ruins are picturesque, of course. The detritus of superseded civilization: Greek ruins, Roman ruins, medieval ruins: all decaying testaments to decadence, decline and fall. To decline and fall was, in Latin, ruere. That is what gave English – and many European languages – the word ruin, noun and verb. And the plural noun is now what we use for a set of things that have declined and fallen, collapsed into heaps of rubble. We look on these architectural mementi mori with a cultural nostalgia and a sense of the triumph of wild nature. What humans build falls, and plants overtake it. But we don’t always picture the life that went on in these places when they were in their full vigour. We weren’t there.

But I was there. This waterpark: I was there yesterday, looking, remembering when I was there so few years ago, in my swim trunks, grabbing tubes and running up the stairs to slide down curvy couloirs and land with a splash in these…

…now-fetid sloughs filled with not lively joy but inert smithereens.

How did I happen to be there yesterday? There was a run in Ontario Place. I won’t call it a race, because it was not officially timed, and the distance was really 4.3 km, not the nominal 5. But the start-and-finish area was in the open plaza that was just outside the waterpark. We gained entry as participants.

You could see the waterpark ruins right there. 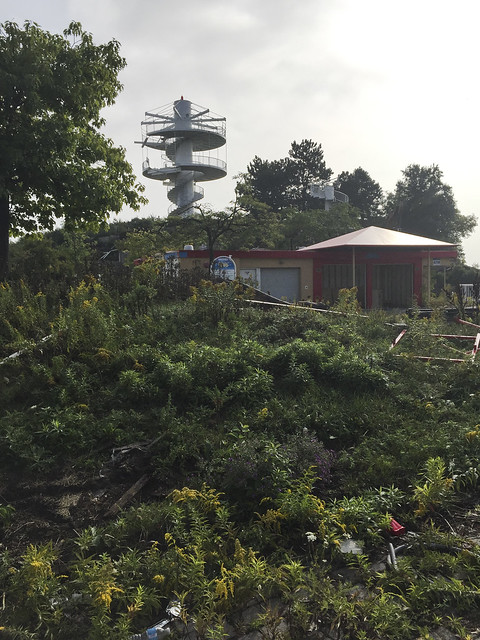 And there was time to wander around before the run. There was even more time after: there was a beer festival associated with the run, and so we could fill our mugs and relax or wander around.

So before the run I wandered over toward the waterpark entrance. It was not blocked off. There were no signs prohibiting entrance, no fences, no dogs, no guards. 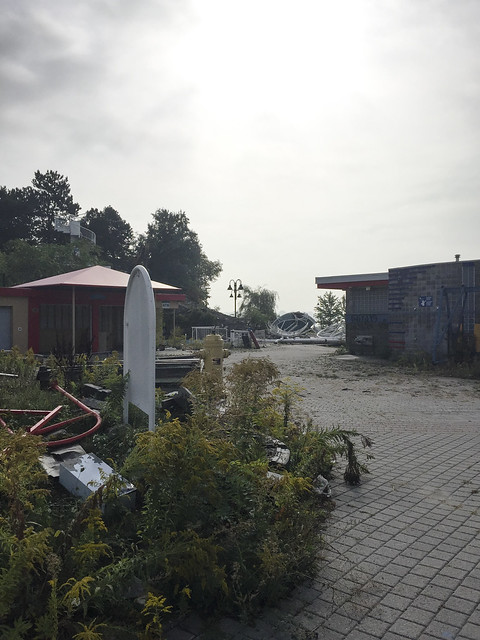 Apparently they relied on the fact that that whole area of Ontario Place is normally closed and inaccessible. But yesterday it was not. We had been given access.

After looking briefly, I went over to the start area and, soon enough, ran. The run was as enjoyable as a hilly 5k on a warm, muggy day can be. It was very interesting to see all around Ontario Place again. Most of it is closed but unchanged; it is not in ruins, dismantled, disconnected. They did, I noticed, remove the log that could be swung to ring the large bell. I did not take a picture. I was running.

Back at the beer festival, I knew no one, so I wandered over to look some more. 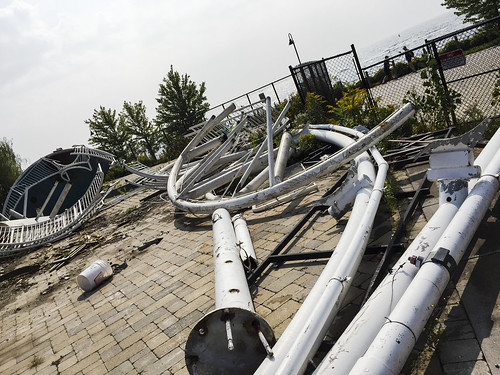 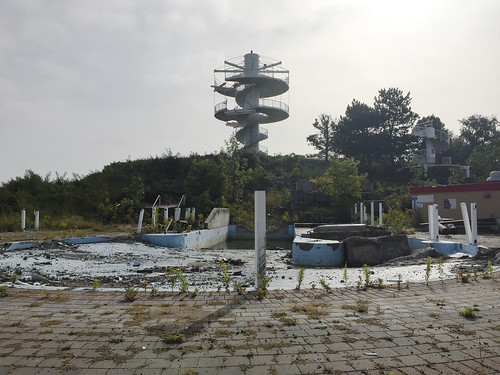 I went to the splash pool of what had been named the Hydrofuge but was informally called the Toilet Bowl: you slid down a short chute into a big bowl, swirled around a few times, and fell through a hole in the bottom into this pool. 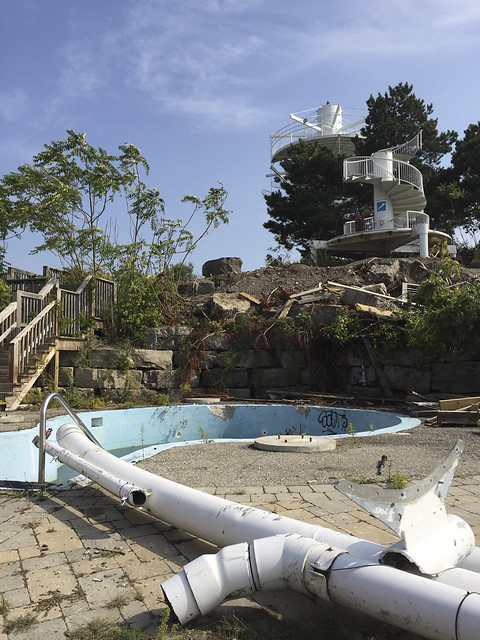 There were a couple of kids climbing on the stairs there. A man and his wife were watching them – their kids. The man told me of the irony of the circumstance: his job was in construction safety. And here was all this out in the open and unsecured, the tractor, the acetylene torch on the landing, the myriad places to fall and be hurt. A checklist of what not to do. 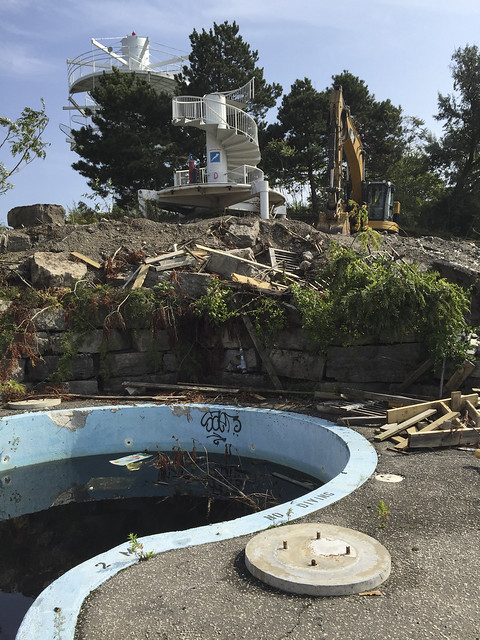 He called the boys down and they went back to the festival. I wandered in farther. 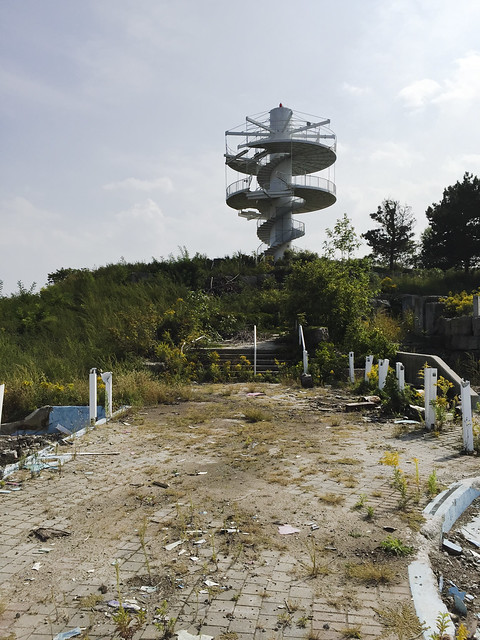 Past the stairs to the path to the stair tower. 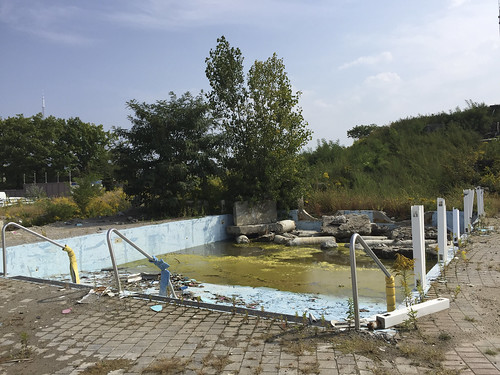 To the pool the tubes landed you in. You can see the cutaways in the concrete where the slides sat. You dumped into the water, splashed, gasped, grabbed your tube, walked up and out and handed the tube to an assistant or kept it and ran back up for another go.

It’s all gone down the tubes now.

Some other people were wandering around, taking pictures. One of them offered to take a picture of me using my phone. 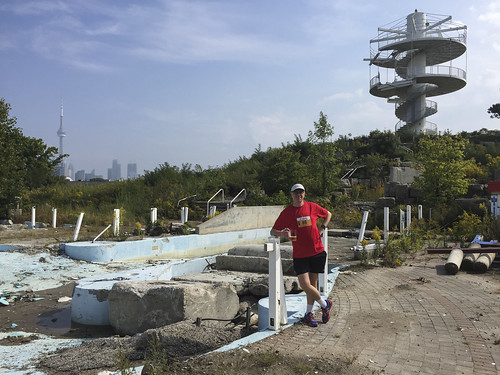 Yes, my phone – these are all taken with my iPhone. You didn’t think I ran races with a good camera on me, did you?

That bulge on my left hip is a water bottle in my pocket, by the way.

There’s a taller tower in the background you can see and probably recognize. The two towers in the picture, both entertainment attractions, have another thing in common: my wife has worked at both of them. 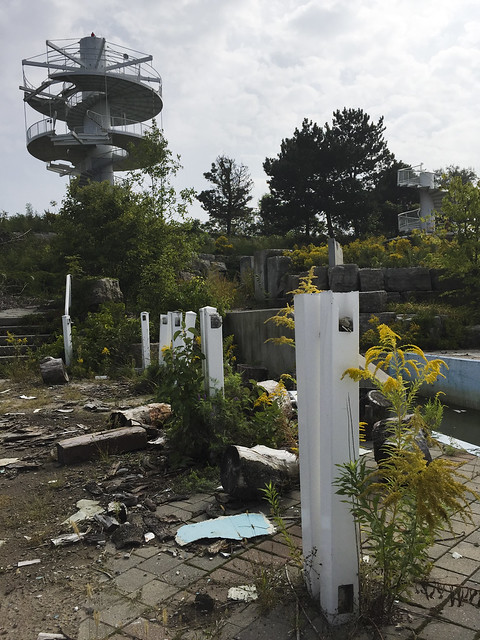 The big family-size tubes that went down a big chute landed in their own pool: 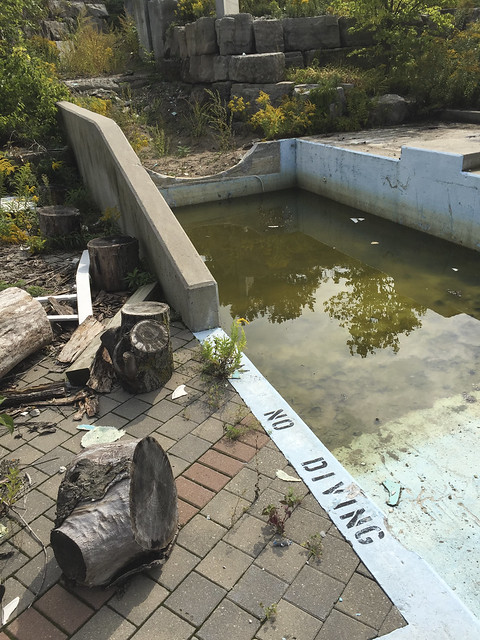 NO DIVING. No falling into oblivion and wet entropy.

That warning comes too late. It’s all ruined now. 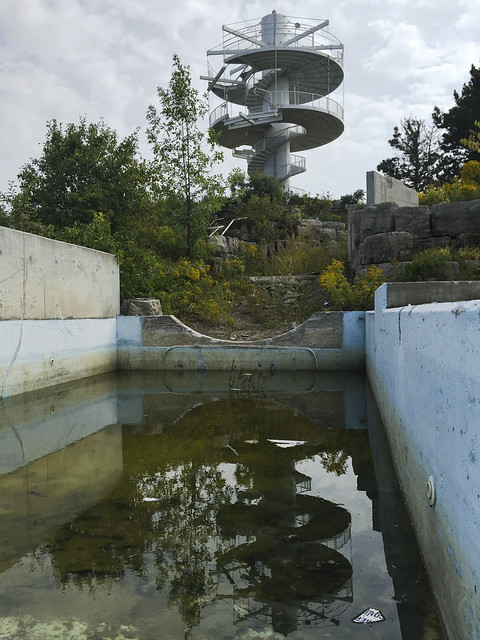 Reflect on that. From the dry heights we come to the wet depths, but when we look down we see the heights.

I walked up the hill. 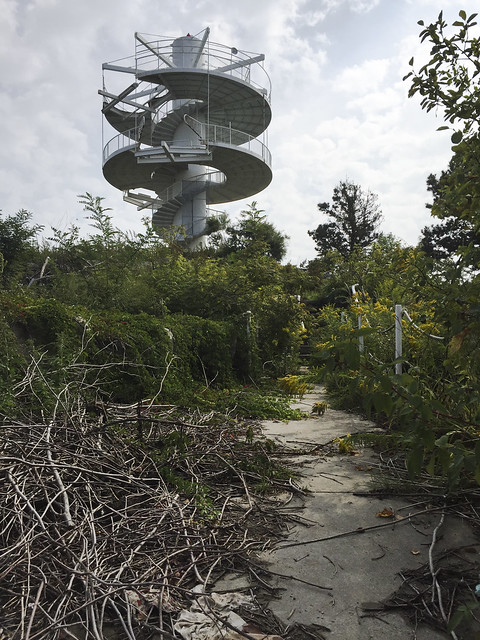 At the base of the tower, I looked over and saw that other tower, its observation deck temporarily effaced by a cloud, its continuity maintained by memory and assumption – and physical persistence. 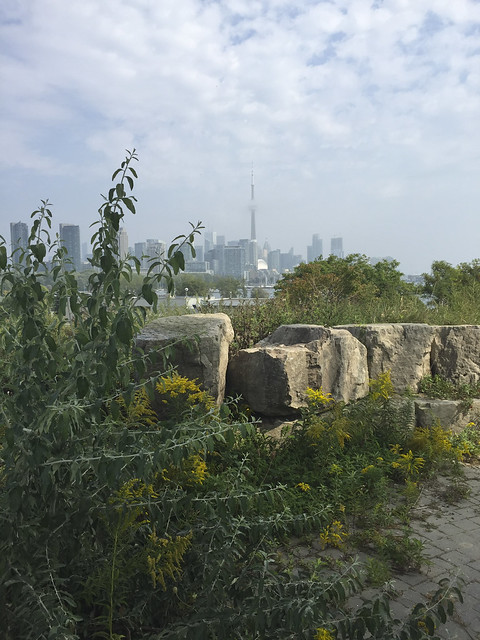 As I adjusted and saved these photos this evening I was playing Led Zeppelin’s BBC Sessions, some rescued and remastered recordings from 45 years ago. Just as I was working on these few, a live performance of “Stairway to Heaven” started playing. 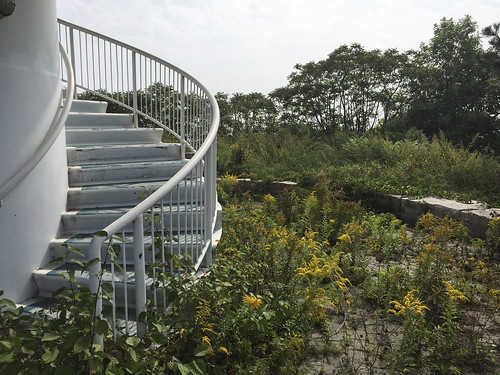 I did not climb the tower stairs. I walked back down the hill. 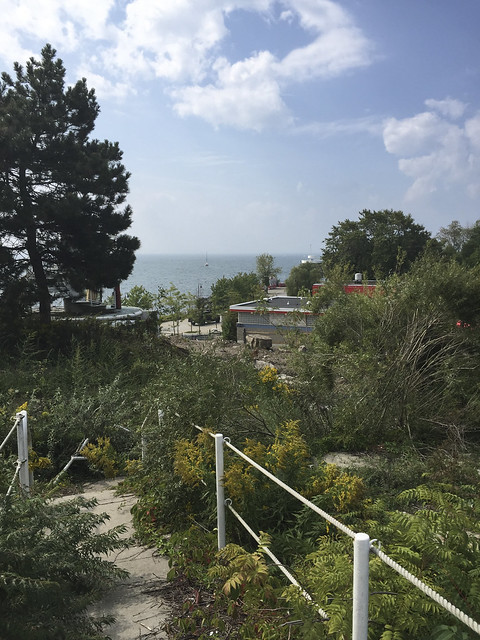 I saw a few others sitting in the ruins. Beyond, the festival: beer and sweaty runners. 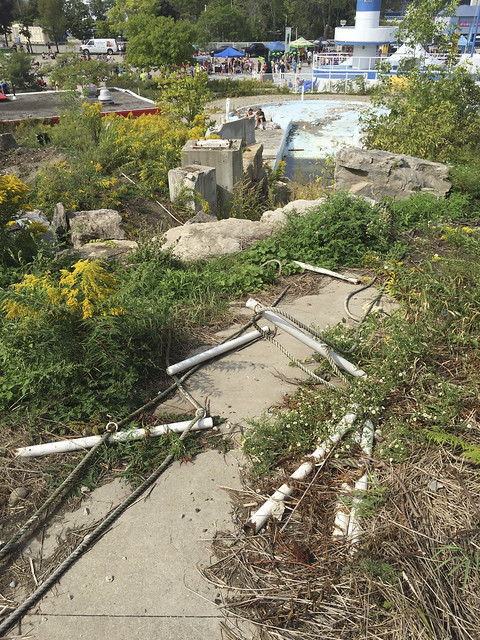 Concrete that has weathered not the assaults of decades and centuries but just of jackhammers and similar heavy equipment. 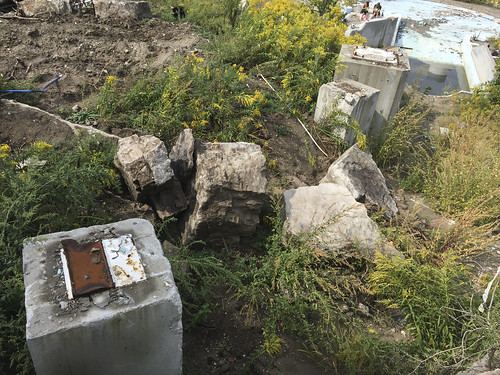 Nearby is the Billy Bishop Toronto City Centre Airport. I could look up and see planes flying away, taking others to new places, slipping for a short time the tangled vines of the earth – but as inviting as the sky is, they all decline eventually, coming back in their gracefully controlled falls. 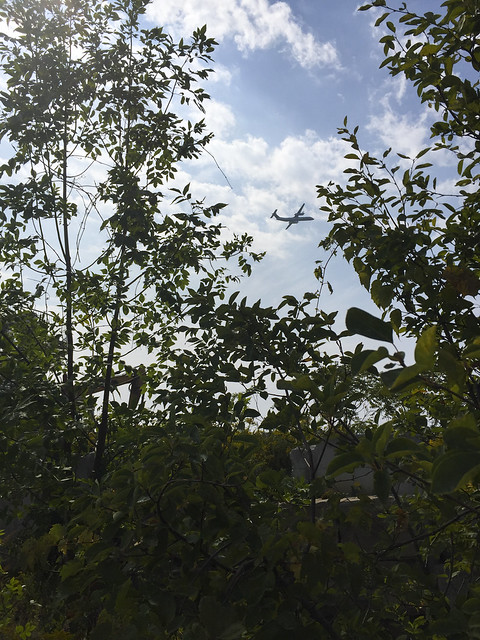 As I walked out and back towards the beer, I took one last look and one last photo. 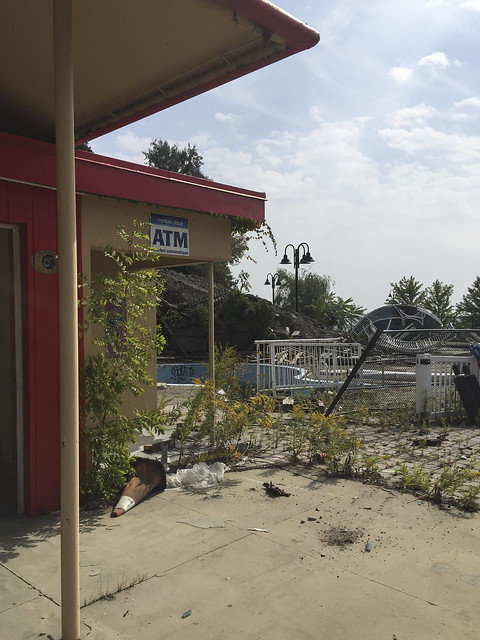 And my iPhone informed me that I had run out of room. It had no more memory available; it was too full of memories – and the present ruins.