This is the second chapter of my month-long work of fiction, NOV. 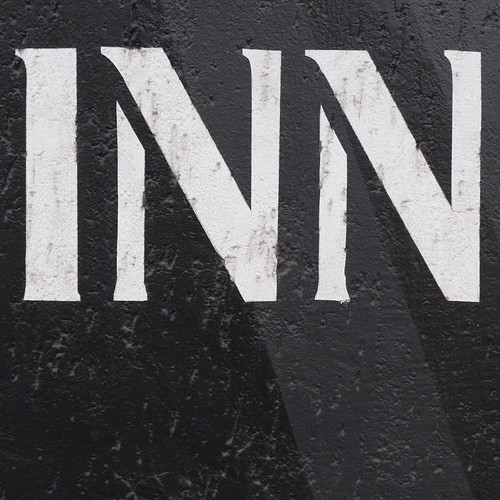 And these shoes: How did Spoiler get them that distance into this lexical jungle without a speck on them? Like someone from a movie.

But the first building at the emergence from vegetation into habi— bears an invi—, a welcoming set of letters: INN.

“This is a good place to stop,” Spoiler says. Huh. He still has a voice. Haven’t heard it in a while.

Spoiler looks over at him sideways, rolls his eye back past his arched eyebrow, pushes the slivering door and beelines to the bar. The man follows and plants himself on a stool. It’s dim, not tiki lounge dim but almost dim enough to disguise the grime and erosion on every surface. Might as well be the inside of a pirate ship, if the inside of a pirate ship were a sketchy bar. But the guy behind the counter is not a pirate. He’s a long-bearded hipster with rivets in his ears, tats on his deltoids. He doesn’t word. He eyes and eyebrows.

Spoiler points at a bottle. Tats-and-beard looks to the man.

The bar guy gives him a look that says I don’t care how much your luck s—s, don’t f— with me.

“To begin,” says the man, “a Guinness.” Whew. Saved by synonyms. Hipster boy goes down the bar to attend to the bevs.

Spoiler, adjacent, swivels a quarter to face him. “You’re gonna have to deal with that little issue.”

“They have a menu here?” the man says.

Spoiler jerks his head slightly towards his left shoulder. There’s a chalkboard on the wall:

“I’d go with the good stuff,” Spoiler says, “as long as it’s in your budget.”

The man reaches for his pocket. His wallet! It –

He was at home. In sock feet. His wallet d—ed squarely onto his nightstand. Great.

Also therefore not in his p—et: credit cards and other forms of identification.

He feels his other p—ets. He usually – yes, there. In the l—et p—et – no, dammit, it’s for fobs. Yes. The fob pocket. The change pocket. Sheesh. A twenty, a spare folded in a squ— this has to stop.

He unfolds it. Spoiler, observing this sartorial expedition, offers “I think you should order the cheap stuff.”

Then he looks down at the shoes, still on the man’s feet. Then up at the man’s face. Sets his left elbow on the bar, leans his — face on his — fist. Says exactly jack squat.

There aren’t too many other people in the place. A couple people at a table over there. A dude at the far end of the bar. That’s it? It seems.

The man drinks down the top of his Guinness. “I have some things to figure out.”

“No kidding. Everybody does. Therapy’s two hundred bucks an hour.” Spoiler looks at the twenty: six minutes there.

“Yup. And no, not back through the forest, no.”

“I didn’t sign on to be your Virgil. I’ll get you to a subway station.”

Spoiler’s gaze is steady on him, lazy but spring-loaded. “What’s your name.”

“Make one up. Whatever. I need something to call you. Or I make one up for you.”

Just then the cheap plate arrives, plunk, dragging with it the arm of the barkeep and the whole guy attached by the shoulder behind that. It’s an unabashed sausage and a heap of m— with a d— of gravy, not even a spl—. The man puts down his c—.

The fist of m—er rivet-ears gathers that and tw—s away again with the rest of him.

“More than one, I think,” says – as we might as well provisionally call him – Frank.

From behind Frank an arm reaches over, a slender-fingered hand with shiny dark nails grabs the wurst from the plate, its related teeth take a bite behind sight, and the tube steak goes back on the plate.

“However many you have,” says Spoiler, “this is…”

This entry was posted in NOV and tagged inn, NaNoWriMo, NOV. Bookmark the permalink.