This is the eighth chapter of my month-long work of fiction, NOV. 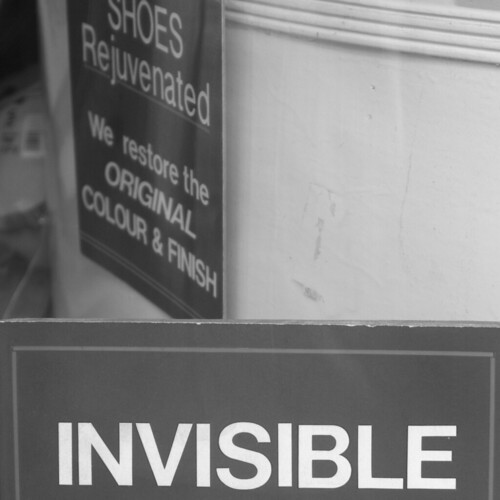 This is a game Frank could kick butt at anytime, anyplace. As he watches it, he can’t help but want to play it. The cards seem to be thesaurus extracts: each has several related words on it. Frank can see that the aim is to make sets of two or more cards that have words with sequences of two or more letters in common. He can see it because he glances at the cards and sees gaps, invisible spaces, and Walter is grouping them together. Frank’s graphemic dislocation, his mental hiccup, is made for this. As long as it’s only gapping one set of letters at a time.

In fact, it’s beginning to bug him, how much Walter is missing. He wants to step in and do it. Look, INV—BLE, CONC—ON, D—NTERESTED, PAR—AN. Lay it down! Is there something you can’t see? Or is the problem exactly that there’s nothing you can’t see?

Spoiler is betting on Tanya and doing pretty well, especially as a few more people come in and join the action. Walter is not holding up; he’s losing narrowly but he’s losing, and three games in a row now. One tots up the cards and calls the score, one hundred twelve to ninety-eight, and the money changes hands and Tanya gets a few more tips and one takes more cut and Walter is not making coffee money.

One leans sideways down to Walter. “Want a rest, Walt?”

Walter shrugs, throws his hands up. “Do you have another player?”

“How about Forrest?” any says. Any is looking at Frank. One looks levelly at any and says, “Frank. Not Forrest.”

“Well? Frank?” any says. “You have nothing to lose. You have no stake in it.”

A heavyset woman with long, curly hair, sitting on the far side of the table, says, “Who is he? Never seen him play before.”

“Virgin action,” one says. “First round, bet blind. You don’t know what you’re getting.”

“I’ll play anybody a hundred on him,” Spoiler says.

“Pass,” says the woman. But two guys nearby take the bet.

Walter gets up. Frank sits down in his place, facing Tanya, with any on his left. He is now in the centre ring, the focus of the action, under the Tiffany light. “Fresh pack,” says any, unwrapping a new deck. “New word sets, never played before, as always.”

“Gonna run out of words sooner or later,” says the curly-headed woman.

“There are lots of words in the language,” one says.

Any shuffles. Any deals. “Place your bets.” The bets have in fact already been placed.

Frank looks at his five cards. Prima facie he sees a set of lacunae: EXC—OR, H—NKI, F—ITE. And in the mess on the table, PARAC—AN. Scanning again he sees, next to EXC—OR, the word SHAVINGS. And – blink! – now he sees EXCELSIOR, HELSINKI, FELSITE, PARACELSIAN. Because excelsior is made of wood shavings. Synonym! He puts the three cards in his hand together while he has it in mind. This is going to be a fast game. He looks at the PARACELSIAN card again, then looks up and see Tanya looking at him, seeing where he’s looking.

And she gets first play.

This entry was posted in NOV and tagged INVISIBLE, NaNoWriMo, NOV. Bookmark the permalink.

One response to “INVISIBLE”