Here, listen to a good song while you read this. The one is not an explication of the other. They’re just on the same general subject, and in the same kind of mood.

Our lives are in league with the freeway. I grew up in the wide-open west, and the limited-access twinned highway was the power line of life. Once you have connected to it, you move fast and smooth, and at night you are a streak of light. I love being in motion. For many or even most of us in North America, our cars are extensions of our selves, two-ton metal protective prosthetics that let us be free to go, that give us power and speed. And the freeway is the freest way.

We’ve had the word freeway for a century and a quarter to refer to an unimpeded access way. For three quarters of a century we’ve meant a highway that you are free to use for free, free to drive on freely and free not to stop – but not free to stop, and not free to get on or off except at interchanges. Free to go fast, but not free to go as fast as you want – if you do, and you’re caught, it’s sure not free. Free to use a car, but cars are not provided for free. And you’re not free to go anywhere but where it goes. It is an electric cord of traffic: enter it and exit it only where it connects. And the cities fly by. There is no turning back.

“Freedom is a scary thing,” Laurie Anderson sings. “Not many people really want it.” What we want is freedom not to have to be too free. We don’t want the burden of too many choices, too many people to have to contend with, too many things to have to look out for. Just give us a limited set of options and let us take the express route on one. Freeways are not freedom to choose; they are freedom from having to keep choosing.

But even that much freedom is not free. I don’t just mean that we pay for the freeways with our taxes – for their construction, their maintenance, their policing, their ploughing – I mean that when we all choose them, they are full of all of us. Freeways exist as an extension of society, they are built by our governments, and they get us from people to people, but when we are on them we want to be free from other people, and the drivers on a busy freeway are no longer free from having to deal with strangers. Strangers on a sidewalk have eyes that see and extensions that swing and are somewhat soft, but strangers on a freeway are nothing other than chaotic boxes, hostile, hard, unpredictable, with eyes that beam light at you rather than taking it in from you. You are not free even to move at speed. You have become a mote in a flow of cooling magma.

But we can build more freeways, yes? Widen them? Offer freedom to more people? Freedom to tie up so much of your money and time and nervous energy in your car, yes. Freedom to go with thousands of others to an off-ramp that leads somewhere that is no larger than it was before, that can handle no more cars than before. Yes. Try connecting a fire hose to your dishwasher and see how that goes.

I drive freeways. When I have to. I choose the smooth fast flow when I can’t get where I’m going within a reasonable time any other way. And then, at last, I exit. I turn away, to a two-lane highway that weaves through the trees and connects to driveways and sidewalks and stores and people walking. A thousand choices to make and things to think about. And that way I am free. 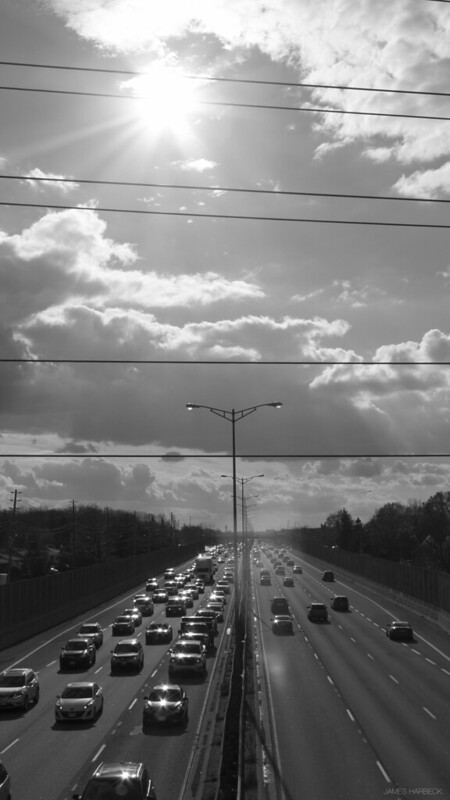