Now that I have set up shop as a full-time storyteller and story-helper, I have decided to create something to help shop myself around – with the past aid of some bookshops and the present aid of Photoshop. Since I have the camera, computer, and consciousness, I can do it myself on the cheap. Here is the image I have made for my business cards: 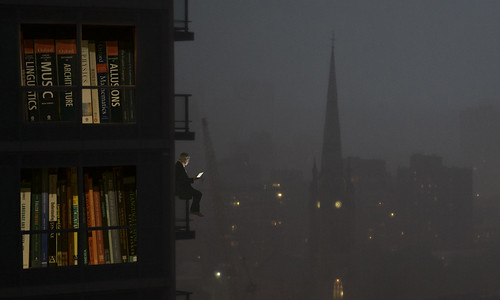 This image may not bring to mind a shop, and fair enough – it makes me think more of Mary Poppins, though you see the steeple of St. James Cathedral in Toronto (the view is out my apartment window on a foggy evening). But even though the clock on the church tells you it’s nearly past the shopping hour, there is something of Schopenhauer in it, in the absorption of the representer into the representation. And so it has the ambivalence of shop, which can be a place, or an act you do, or an act you do to something, or an act you do to yourself.

There are no shops in the picture, to be sure, except perhaps on the screen of the laptop, leaning to the darkness, but a shop was at first a lean-to, or shed, or vestibule, the front end of a workshop where shoppers could shop for what had been made. And here we see someone leaning between the works and the world.

Well, we see someone sitting on the edge of his highest kitchen counter, having set the light just so and the put the camera on timer and used a chair to climb to the precipice, and then from the resulting photo cut out and copied over and adjusted in assorted ways to appear in a place he never would in reality. But that’s what storytelling is for, isn’t it? Why have imagination if it is going to stop where the real would? A fall from a balcony would be costly, but a picture is cheap. We now have the means for creation to be as costless and evanescent as any of the endless photons spraying from the screen. All it takes is time.

And it is valid that what is shopped should be cheap. Cheap comes first from a word for any bargaining or bartering, related to modern Dutch koop and German kaufen, ‘buy’. It is also fitting that it be a story, for scop or sceop (said “shop” or just sometimes “skop”) is an Old English word (though unrelated), survived narrowly into the modern age, for a poet or minstrel – a storyteller.

And likewise might it be a creation, for the Old English word for ‘create’, scieppan, became in the past tense gesceop, said like “y’ shey op” – as in Ælfric’s translation of the Bible, the very beginning of it all: On angynne gesceop God heofenan and eorðan. ‘In [the] beginning created God heaven and earth.’

You will hear a kin of gesceop in the last movement of Beethoven’s 9th Symphony, in the text of Schiller’s “Ode to Joy”: “Ahnest du den Schöpfer, Welt?” Which means ‘Do you sense the creator, world?” And the next line is “Such’ ihn über’m Sternenzelt!” ‘Seek him over the canopy of stars!’

But when you hold a million stars in your hand, and you can use it to sit at an edge of the sky you have seen through your window, with the knowledge of years behind you and the years of experience ahead, where is your canopy?

Oh, and here’s mine: jamesharbeck.com