Listen to the podcast of this coffice space review on Patreon.

Take today for example. I stopped through the Summerhill liquor store (as one does) and then I needed to sit and do some writing and editing. I crossed the street to Boxcar Social – the location on Yonge Street, obviously. I got my coffee and then I looked around for where to sit. The back of the downstairs was pretty busy. I went up to the second floor. Much quieter. Also what is typically called a – how you say – hot box. There was a guy sitting by a table right in front of whatever was passing for an air conditioner, and he was absorbing every ounce of cool it could wheeze out on him. I sat down a couple of metres away, and within a minute, I felt like a barber’s shaving towel.

So now I’m on the back patio, along with about a dozen other people. Many of them are talking, but the cicada overhead is laying down a buzz blanket that’s sort of like sonic Nilodor. The people-watching is good when I want to watch people, as long as I don’t mind that many of them are drinking beer and it’s making me thirsty. (Sorry, got work to do still, and anyway, I’m going to a barbecue this evening and I will have more than enough there.) 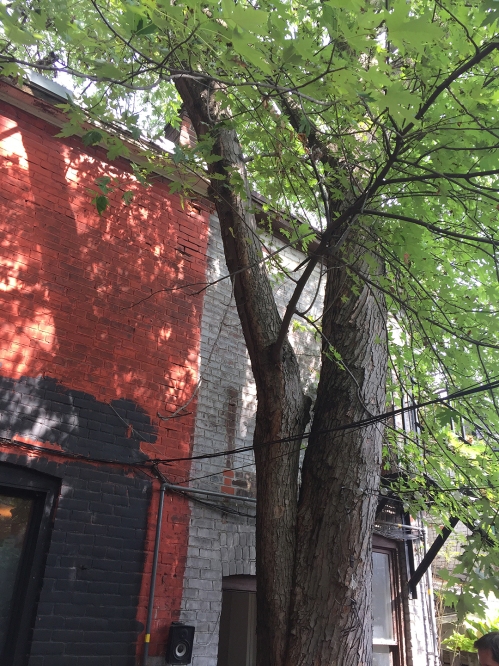 Jon Cicada is singing up there

This patio isn’t for everyone. It’s not for people who need quiet. It’s not for people who don’t like bugs – not just the cicada, but the incessant little ones that want to land on your cup and your computer. It’s not for anyone who has any significant mobility issues – not only are there steps up and steps down and narrow passages between tables, you have to squeeze past a tree and step over its roots just to get out here. (There is access from the alley, sure, but it’s still counter service, and the counter is inside, past that huge tree.) It’s not for anyone who is easily distracted by the smell of baking from the kitchen, the back door of which is right there.

And if you hate people-watching, stay away.

So anyway, I’ve have quite the enjoyable dog-day afternoon here, getting stuff done. I’ll happily stay here for a while yet… but I’m going inside before it rains.

This entry was posted in Coffice Space and tagged back patio, Boxcar Social, Coffice Space, Yonge Street. Bookmark the permalink.