After we left Dingle in the late afternoon, we headed to Killarney for our overnight stay. A friend of mine had assured me that if I had time to kill or just wanted to take it slow, Killarney would be the place.

We would have had more time to kill there if we hadn’t taken it so slow on the road from Dingle. But we were stuck first behind a sluggish truck and then behind a minivan with the sort of driver who stayed well below the speed limit but sped up when we would otherwise have had the chance to pass. As the day got darker, so did my thoughts about the minivan’s driver. We finally pulled into Killarney in early evening, with a storm forecast to follow us in a few hours.

Our hotel was lovely, genteel, nicely furnished, with short flights of stairs everywhere and a faint herbal hallway aroma suggesting a fine old home now open to select guests. Its pool was closing at 9, so we used that first and then strolled the few blocks into the heart of town to find food and a pint. Killarney is pretty after dark and its heart is quite walkable. There is a park called the Haha in a roundabout with a stone Methodist church nearby, and there are horses, and hotels, and pubs. 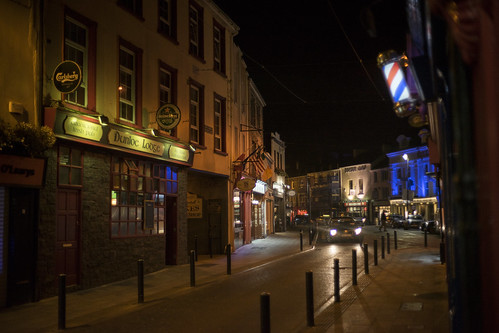 Have I mentioned that many pubs in Ireland do not sell food? It’s true. (In Canada it’s not even legal to have a pub that doesn’t sell food.) Have I mentioned that many places that do sell food don’t sell it after 9 pm? Well, anyway, we found our choice was between expensive, nasty, and closed, or some combination thereof. We went with cheap and nasty but open. And then we got to the pints at a proper pub with live Irish music. 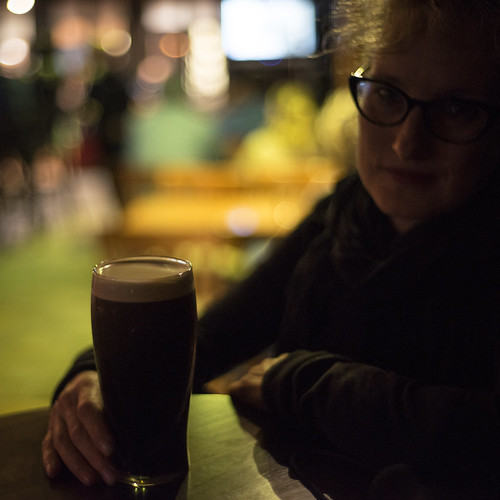 At length we took sanctuary in our hotel with the storm hard on our heels. It was what Ireland calls an orange weather alert. We went to sleep with the sound of rain lashing our window, which I find curiously calming. But I woke several times in the night to the sound of no rain but the wind doing its best Big Bad Wolf. I was almost worried about our little gutless car, which a strong Irish toddler could probably toss across the street.

The storm was due to move on by noon, so we took it slow in the morning and killed time: a swim in a quiet pool, steam and sauna, a thorough Irish breakfast – eggs, sausages, bacon, tomato, black and white puddings, toast, plus yogurt with nice dark fruit sauce. Too wet out to see any more of Killarney on foot. But when the time came to go, it was fit for driving, and the lady at the desk was sure that at worst there might be a few branches down in the park.

The park? Yes, my chosen route to Cork detoured through Killarney National Park, the first national park in Ireland (founded in 1932). Aina had the impression that it would be a simple, flat garden-like park. I guess when I looked at the pictures of it online she wasn’t in the room. Heh.

The driving was damp, but I took it slow. Grey and drizzly weather can make for nice moody photos, but I was the driver, so I pulled over when there was a parking lot. Our first stop was by Derrycunnihy Church, a dark and disused stone sanctuary by a rushing brook. 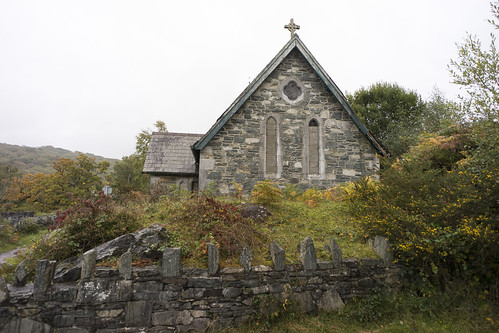 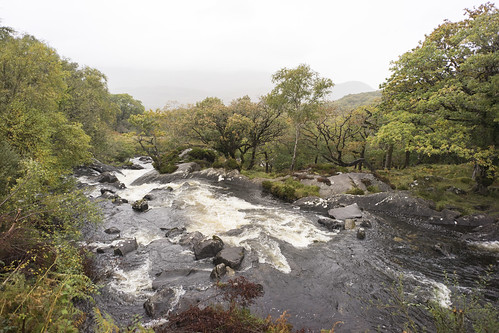 Derrycunnihy (also spelled Derrycunihy), name of several things in that vicinity, is an Anglicization of Doire Coinche. Doire means ‘grove’ or ‘thicket’ and Coinche is… a name of a local barony, it seems. Anyway, the church, on that basis, would in Irish be Cill Dhoire Coinche, I believe. But you won’t see that on a sign.

We wound up the mountainside, past a ruined castle not worth a photo stop, and halted again at Ladies’ View, so called because some of Victoria’s ladies-in-waiting were impressed with the view from there. Of course people had been living around there for millennia but its name honours a small coterie of rich foreigners who were just passing through. (As I grew up hiking near Lake Louise, Lake Agnes, and Mount Victoria in Banff National Park, this concept is familiar to me.) Never mind them, though: enjoy the vista, as charming for what’s hidden in the mist as for what you can see. 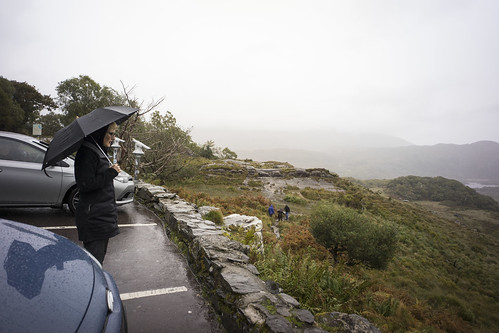 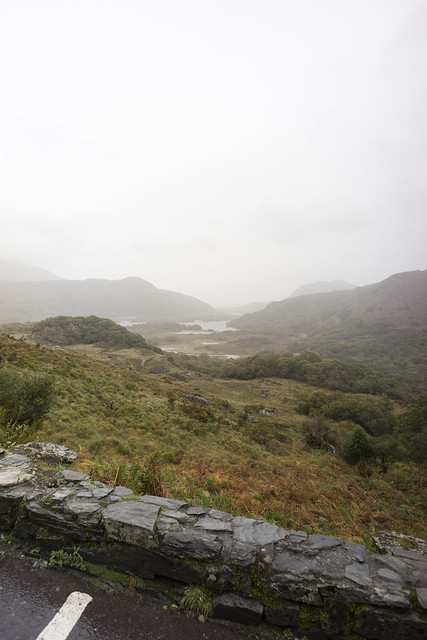 Up and around the corner we passed Lough Looscaunagh (Loch Luascánaigh). I read that luascánach (of which luascánaigh is the genitive) means ‘swinging’, though I note that luas cánach would mean ‘speed of tax’. Our speed was not being taxed, except by photo stops. 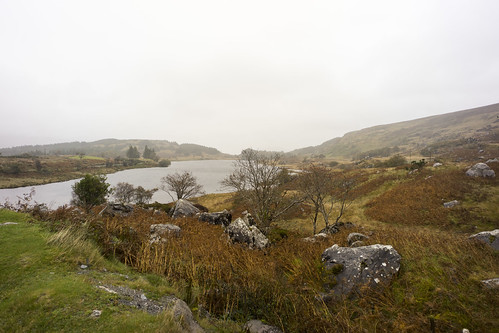 By the highest point of the road, it forks just before it slips through a gap, and at the fork there’s a shop and a decent restaurant. This is Moll’s Gap. It’s named after Moll Kissane, who ran an “unlicensed public house” while the road was under construction. A family of the same name run a farm nearby where, a road sign will tell you, you can adopt a sheep. I’m more in favour of whatever Moll was pouring. 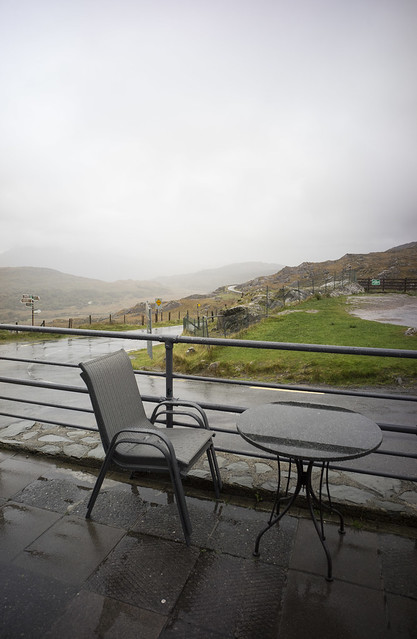 But when we got there, Moll wasn’t pouring; the weather was. Well, no, it was just misting, which meant we missed seeing some distant things and half-saw some others. But as I said, memory and experience can sanctify small details. A little thing can make a big difference, and a gap may be a high point.

Consider the sloe. It’s a little plum-like fruit. It makes the difference between gin, a clear liquor fit for dry martinis, and sloe gin, a cloudy liqueur fit for darker drinks. The two key details about the sloe are that it is dark – whence the term sloe-eyed– and that it is from a spiky shrub, hence its other name, blackthorn. But it is sweet, of course it is. Dark and spiky things can be sweet.

The Irish word for ‘sloe’ is airne.

You may have noticed in Cill Dhoire Coinche that the word for ‘church’ is cill (remember that c is always said like “k” in Irish). Every Anglified Irish place name that starts with Kill or Kil is named after a church. Like more Irish words than you might think, cill traces back to Latin – in this case, cella, meaning ‘small room’ or ‘sanctuary’ and, yes, direct source of English cell.

Sloe Church – or Blackthorn Church, or Sloe Sanctuary or Blackthorn Sanctuary – is, in Irish, Cill Airne. Which is Anglicized to Killarney. Which is now sanctified in my memory in dimness and darkness, beautiful for what we saw and what we did not see. 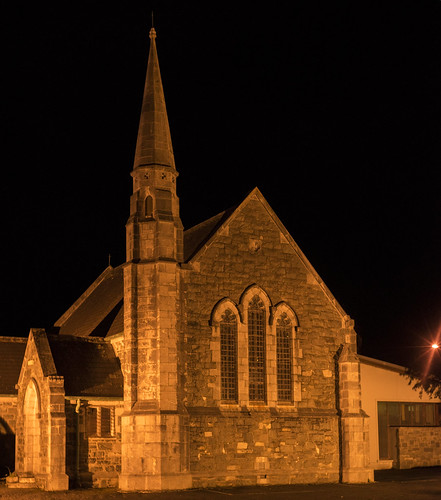