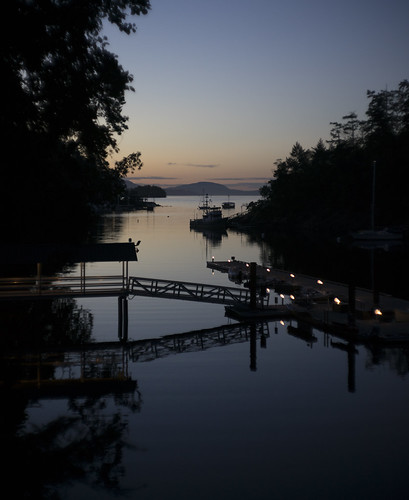 Twilight time to dream a while
In veils of deepening gloom
As fantasy strides over colorful skies
Before disappearing from view
—“Twilight Time,” Ray Thomas (The Moody Blues) 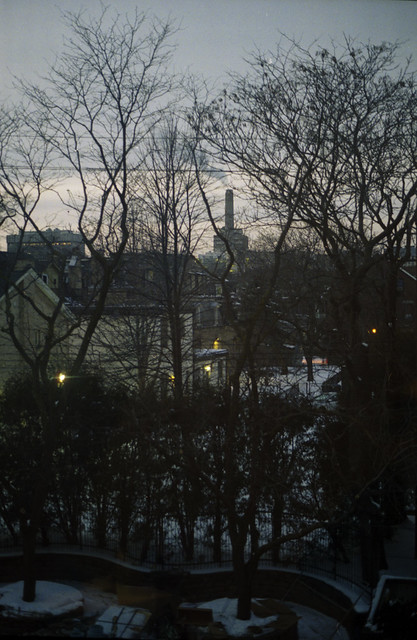 Six o’clock.
The burnt-out ends of smoky days.
And now a gusty shower wraps
The grimy scraps
Of withered leaves about your feet
And newspapers from vacant lots;
The showers beat
On broken blinds and chimney-pots,
And at the corner of the street
A lonely cab-horse steams and stamps.

And then the lighting of the lamps.
—“Preludes,” T.S. Eliot

The day concludes with the sound of “Taps” or “Last Post”; the flag comes down, the lights turn on, the sun’s glow abates gradually to a gleam and then a glimmer until at last the only light is the dimmer glint and glitter of the stars and the looming halos of the streetlamps. In the time it takes for this transition – what photographers often call blue hour (the hour after golden hour, the two divided by the sun’s disappearance; it last rather less than an hour in the tropics, but much longer as you approach the poles) – the light is donzerly, but on the other end of the day:

O say, can you see by the donzerly* light
What so proudly we hailed at the twilight’s last gleaming?

There is a song for this time of the day, too. There are many, in fact, but should you wish to take a walk, especially by the bonnie banks of the River Clyde, with your beloved by your side, then you are roaming in the gloaming:

More like glowing, if the etymology is accurate. It’s a word for twilight, especially the evening twilight; it comes from an old word glóm, ‘twilight’, which – surprisingly – appears not to be related to gloom (or to glom as in glom onto), but is related to glow. The Proto-Indo-European root that gives us glow (and gloaming) also gives us gold and yellow and even chlorophyll. It is not the same as the root that gives us gleam, glimmer, glint, and glitter, though nothing says they’re not related farther back. Between them, they have given a kind of semantic gravitational attraction to /gl/: quite a few words starting with it have something to do with light, even if they have no known common origin – there can get to be an effect on which words we use and on how words evolve when a certain sound cluster gains enough of an association with a sense to “sound like” it means it. (Trust me: I wrote my master’s thesis on this.)

Gloaming is most associated with Scottish speakers (and writers – and singers, of course), but it has suffused itself throughout the language. It is not as widely used as it might be; twilight seems preferred, perhaps for its crisp start and finish and its double sigh, as opposed to the potentially gloomy moaning of gloaming, but gloaming still has a lovely literary sense and is not known to cue thoughts of vampires.

And if this word grows on you and you wish to have the romance of the gloaming in any moment, remember that the sun is always there and the world is always round and it is always gloaming in about one twenty-fourth of the world at any time. As John Muir wrote in John of the Mountains,

This grand show is eternal. It is always sunrise somewhere; the dew is never all dried at once; a shower is forever falling; vapor is ever rising. Eternal sunrise, eternal sunset, eternal dawn and gloaming, on sea and continents and islands, each in its turn, as the round earth rolls.

And so, as Eliot says at the end of “Preludes,”

Wipe your hand across your mouth, and laugh;
The worlds revolve like ancient women
Gathering fuel in vacant lots. 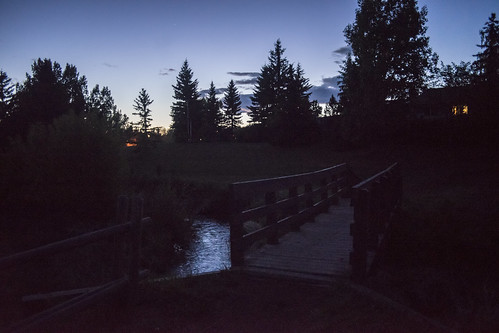