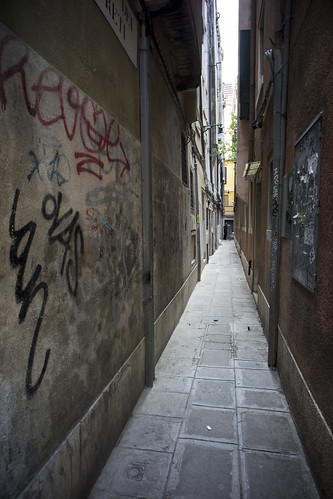 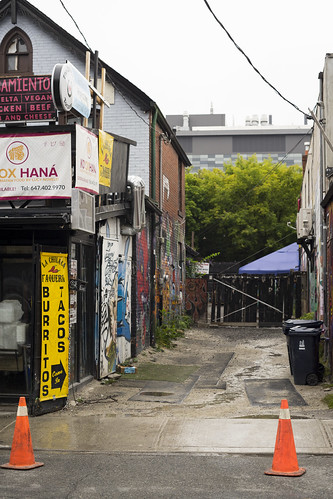 What is an alley? The backside of a street, the behind of a row of buildings, the place they put the garages and garbages. It may be dirty or it may be clean, but it’s the face a place makes that is deliberately not its public face. It’s the way in between, the way behind, the not-best-dressed not-best-behaviour locale. It’s the place you duck back down to get away from the eyes on the avenue. If buildings had social lives and could go to work and to parties, the alley would be the building’s 3 AM at the party, or its 4:30 AM crawling back home, or its 8 AM just out of bed and not dressed yet. 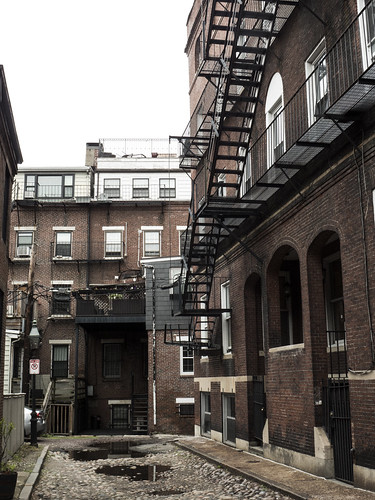 And if your home or office doesn’t have an alley, if it pretends not to have a backside, then it has to put its backside stuff all out front. It may seem honest, but it’s unsightly. We know everyone has trash; an alley just lets the ugly be with the ugly, the sloppy with the sloppy, the dirty with the dirty. It’s the place that reminds us that not everything is Officially Beautiful. “Outside the gallery,” Rebecca Morgan Frank wrote in “How to Judge a Picture” (2016), “there is an alley full of garbage.” It may be beautiful garbage, in a beautiful bin by a wall covered in beautiful graffiti, but it’s garbage. We took all the parts we liked and the rest is waiting to be taken away, just like all the bits of our personalities and lives that no one else has had any use for. 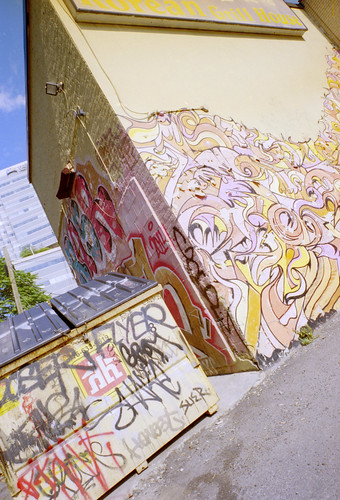 I want to go in the back yard now
And maybe down the alley,
To where the charity children play.
I want a good time today.

I want to go in the front yard now
and far away from these nappy weeds — this alley
too. I wanna see where the well-off children play.
I want some proper fun today. 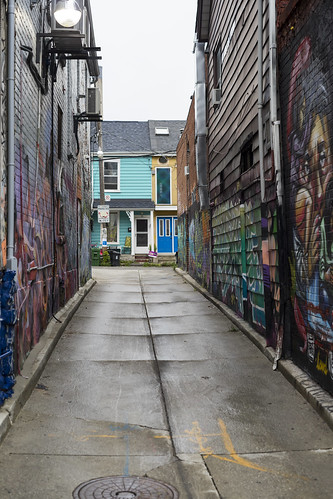 It’s a necessary dialectic. It’s the secret place. You can’t have secret without unsecret. But if you have unsecret, you also want secret. If you have clean, you need to take a dirty little break every so often, even if only so you can deny it. Liz Berry knows:

There is an alley
where you can go,
where you can kiss
someone’s mouth
until you climb
inside them, force
your way in, push
your cells into their cells
and become one
creature — angelic.

It isn’t the way
you’d dream it.

I never went there,
I promise you.

Though there are mornings
now, miles from that place,
when I wake
with the thought of it:
wet and bitten, half-
winged. 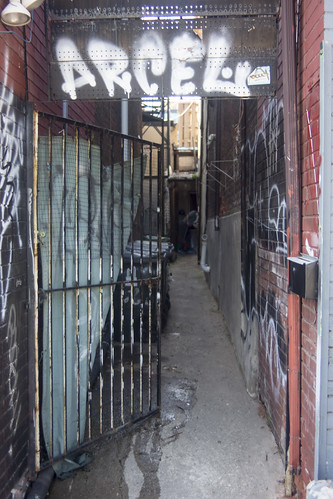 We have all gone to the alley, and we all deny it at least some of the time. But we all have it inside us, if we can find it. Robert Pinsky wants to know in “City Elegies” (1996):

All day all over the city every person
Wanders a different city, sealed intact
And haunted as the abandoned subway stations
Under the city. Where is my alley doorway? 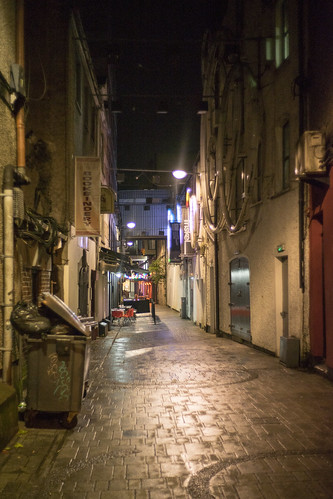 An alley is like an aisle, but the word alley is not related to the word aisle, even though the s in aisle is a prissy intruding unetymological snake added on the analogy of the one in isle (it also slithered into island, where it also does not belong, and it was added back into isle to display its Latin roots – it gets around so much, I think if it were not for St. Patrick there would be one in Isreland). No, an aisle is originally an ell, an ala, a wing. But while an alley has ells and is shaped like the space between its ells, it is not an ell. And while wings are attached to backs, an alley is not a wing. It is where wings go, on lost birds, and where garbage goes, and where we go to when we go. French for ‘go’ is aller, and for ‘gone’ is allée, and that also means ‘way, path’ and is what gives us our alley. 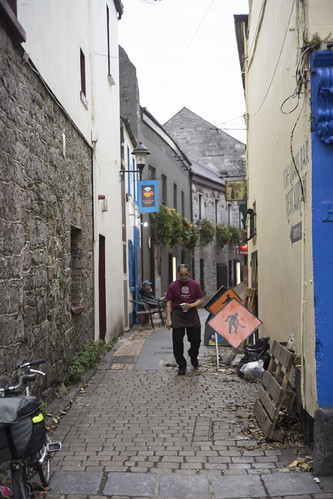 It’s straightened and straitened, all pavement and brick
The sound is damp concrete, the light is mud-thick
Tall storeys surround you, your soles always stick
Down the backside, the dark side—turn now for the trick 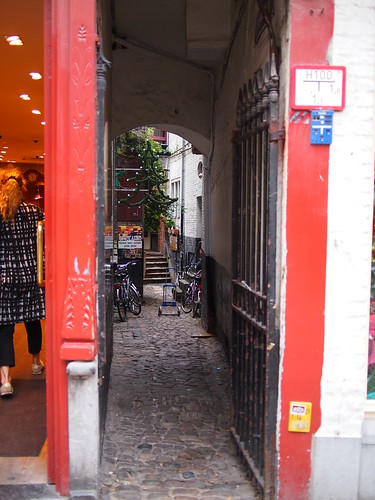