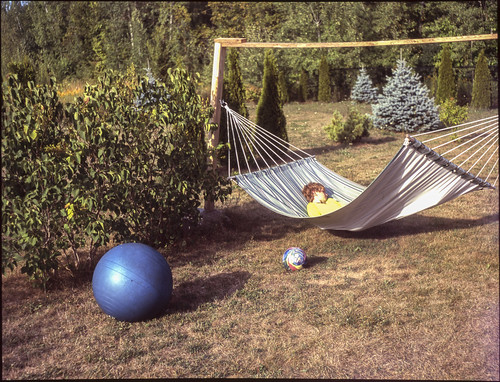 Hammock. From a Cherokee word meaning ‘to dump abruptly on the ground.’

No, no, I’m kidding. It’s from English ham plus mock and first meant ‘to make fun of a pig.’

Nope, not that either. Sorry. It’s from hummock, which (as everyone knows) means ‘little hill’, from what the damn thing dumps you on when you try to lie in it.

Kidding again. It’s from Hamtramck, the name of the town where it was first… wait… this just in: Nope.

Oh. Sorry. Swedish hammock, which means ‘porch swing’ (this is true), is from English hammock.

It is, in fact, from hamhock, which I assume you know, transferred from the netting in which hamhocks are hung to age in barns, attics, garages, or wherever.

Sorry: It is, in falsehood, from hamhock, etc.

Damn, so much hangs on this, and this hangs on so much, and every turn you get dumped in the dirt. Can we put this to rest?

The truth – the real truth, and no kidding now – is that English got it from Spanish hamaca, which got it from Taino (a language of the Caribbean), originally hamaka. And it means…

…a net that is suspended from both ends, for sleeping in.

My first encounter with a hammock was as a little kid. My parents had one (they probably bought it in Mexico, where we lived for a short time, just long enough for me to have a dodgy encounter with a tarantula, from which I got my superpowers). It was the kind that didn’t have a stick across each end to spread the net so you could find your way on. It was just a sort of mesh anaconda: you would lie in it (eventually) and look like the latest meal of a fishnet snake suspended at both ends from two trees.

Of course I got dumped in the dirt more times than I ever actually reposed in it.

But lying swinging in a hammock, once you’re in and comfy, is many a person’s idea of bliss, and with good reason. It’s like being in one of those baby carriers. And you’re out in the lovely warm (one hopes) outdoors, with trees and grass and so on, swinging gently.

Or you’re a sailor in the dark innards of a ship, swinging like a bunch of bananas at every wave. It was sailors, after all, who got hammocks from the Taino, and spread them to other sailors, who used them a lot. Apparently swinging like a bunch of bananas is better than the alternative, which is being dumped on the deck like a defunct squid. Also a hammock can be slung temporarily in limited space.

Oh, incidentally, banana hammock is a slang term for Speedo bathing shorts. I’m not going to explain why. This is a digression and you are free to pretend you never read it.

And no, I don’t know where Taino hamaka came from. Believe me, if I knew, I would tell you. (I know you believe me.) But the hammock was a good invention: it keeps you away from assorted things on the ground that might want to bite you while you sleep.

It would not keep you safe from bears. But it dumps them too.

One response to “hammock”