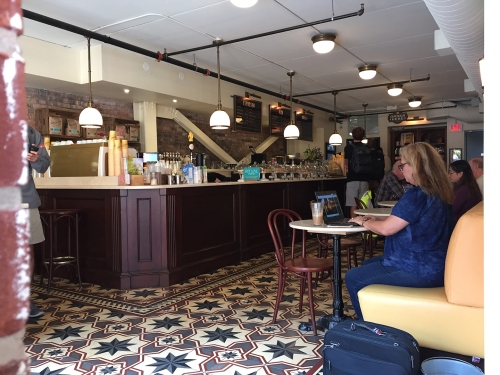 Here’s the old side

You can listen to this with ambient sound to give you more feel for it. Just go to Patreon (the coffice space audio tracks are always free for everyone!).

The Balzac’s on Market Street is the closest coffice space to where I live, but I don’t work here all that often. It used to be a narrow, dark, and often crowded place, which didn’t appeal to me so much. Now they’ve expanded into the might brighter space next door that used to be a juice bar or something. You can still sit in the old side in chthonic relative dimness at one of the eight marble cookie tables along the padded yellow wall bench, the three towards the window, the four stools at the marble counter right behind the espresso machine, or – weather permitting – the patio on Market Street (which is pretty nice), but you can also go to the new annex and occupy one of four marble cookie tables or a stool at one of two marble high-top counters that supposedly seat eight but really more like four each. And when you’re in the new part it’s bright. 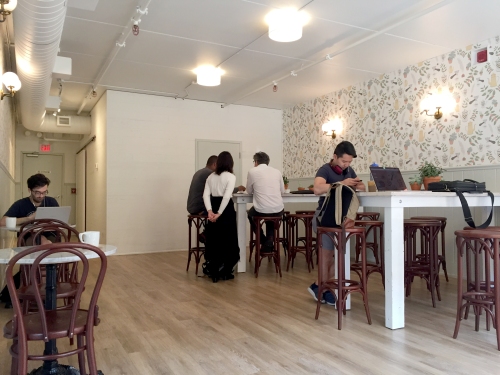 Here’s the new side

I won’t say it’s any quieter in one part than the other. Obviously all the coffee noises are in the old side, but the two are connected by an open archway so it passes through. The music also plays only in the old side. But conversation tends to drown it out anyway. And when it’s busy with people talking with each other – as it can be mid-morning – there’s a bubbling swimming pool of noise, let me tell you.

Balzac’s is a chain, and I’ve already talked about their location at Ryerson. Each location has some of the character of its neighbourhood. This one is across from St. Lawrence Market. Market Street is the most charming little street in a neighbourhood that’s overall pretty charming, and I’m not just saying that because I live here. What the locations don’t differ in is their coffee – always good, no matter what you get – and their food items. I seldom get food at a coffice space, but I have difficulty resisting the peanut butter squares at Balzac’s. 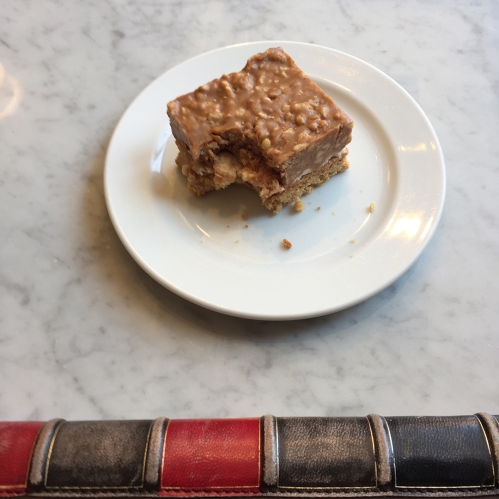 Just look at it.

Another thing the locations have in common is that you don’t have to navigate steps to get into them or to their washrooms. And the washrooms are modern and clean. No stairways to hell or basement safaris.

I remember overhearing some nitwits talking about one of the Balzac’s locations – “Yeah, it’s named after a city in Alberta.” Just to clear this up: Balzac is not a city, not a town, more like a crossroads just north of Calgary. And it’s named after Honoré de Balzac, as is the coffee chain. Why name a coffee chain after a famous French author? Because he was a seriouscoffee drinker. Like a twenty-cup-a-day dude. No idea how he held his pen steady enough. I don’t think I’d even be able to type. Itt widuhok beeh liikjjke thsispaosbs. 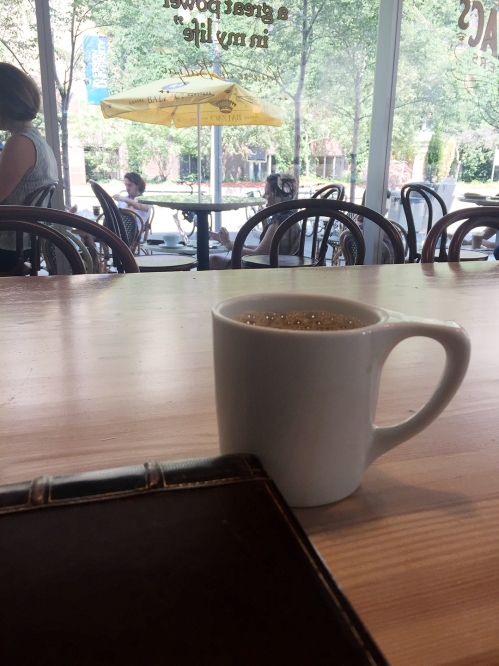 Listen to this coffice space review (complete with ambient noise from the actual place) on Patreon.

Balzac’s is a local chain of coffee joints. They’re very popular and they make good coffee in all its wondrous forms. They have delicious snacks, too – I recommend the big peanut-butter parallelepipeds. And their locations are all nice looking, each in its own way. There are at least three of their outposts in walking distance from me, depending on what you consider walking distance. But I don’t often go to them to sit and work – especially not to the two nearest me. END_OF_DOCUMENT_TOKEN_TO_BE_REPLACED