We have a paradoxical view of travel and time off in English. As I’ve already noted, we historically associated travel with unpleasantness. And yet we assume that significant time off will be spent away from home. In my latest article for The Week, I look at some of the other lexical paradoxes we have for leisure time:

There’s no vacation from the quirks of English

Last week, I quipped on Twitter, “Says something that English and French looked at a Latin word for ‘torture’ and the English used it for travelling and the French used it for working.” The next day, my editors at The Week emailed to ask if I had a topic for an article for them this week or next, and I said… hmm, yes! It hit the internet today:

The trials and travails of ‘travel’

Not nice, not silly, actually rather awful

My latest article for The Week is about words with meanings that have travelled quite a bit over the centuries. It’s not that they’ve clouded or warped the senses, but their histories are likely to throw you, or at least leave you in doubt.

11 words whose meanings have completely changed over time

Wines, the world, and so on

I love wines. Especially good ones. From all over. Aina and I go on trips just to taste wines. My serious wine education started when I was 19 (thanks, cousin Sharon). For the past 16 years I’ve edited the website of Tony Aspler, Canada’s wine guy, and that was where I got the idea of doing word tastings.

So, naturally, when I got the opportunity to write an article for a travel website about wines to choose for a starter wine cellar, I very happily took it. And I sure enjoyed writing it. Here it is. If you don’t enjoy reading it, have a glass of wine and try again (I recommend a chilled sparkling wine – a blanc de noirs from Champagne if you want to spend the money, or a Gloria Ferrer from Sonoma, or a crémant de Loire or, heck, why not Seaview Brut?).

The world in your home: How to build the ultimate international wine collection

Things to know about the word Douro and the river and region it names:

1. It’s not “door-o,” even if it is the gateway to some stunning wines and scenery.

2. It’s not “do row,” though you can boat on it. Port merchants used to use it to ship port. Now it’s dammed, so they use trucks. You can take a boat to drink and sing and look at the hills. I recommend it.

3. Don’t even think about it being dour. It’s the home of port. You know, one of the most posh ways of getting sick drunk ever invented. Dour is not it.

4. The Spanish version of the name, Duero, is also not “do row.”

5. But Portuguese is not pronounced like Spanish anyway. If you pronounce Portuguese as though it were Spanish, you can count on being wrong, and someone’s probably going to get hurt.

6. Douro, the Portuguese name, is said like English “dough roo.” You may or may not rue the dough you spend visiting this region and trying 90 wines. I don’t rue it.

7. Duero, the Spanish name, is pronounced the way it’s spelled, provided you know how to pronounce Spanish. Like “dwair-o,” for those who don’t.

8. The name comes from Latin Durius, which in turn most likely comes from a Celtic word meaning (you’ll love this, it’s so intensely descriptive) ‘water’ or ‘river’. The Proto-Indo-European root is dor.

9. Water is what you can end up drinking wine like in this area if you’re not careful. You need to be durable. You should drink lots of water before bed.

10. You can’t fully taste the word without tasting a lot of wines. Not just port, which is what the Douro region is known for; dry reds and whites too. I can’t do that for you here, so you’ll just have to go about it yourself like I did. By Tony Aspler’s count, he, I, and the rest of our group tasted about 90 (69 in Portugal and 21 in the Duero region of Spain, upstream).

11. If you just visit the Douro DOC wine region in Portugal, you can be forgiven for thinking maybe Douro really means ‘the opposite of flat, straight, and wide’, because that’s what everything around there is: the opposite. The roads are a lane and a half wide and don’t go the length of a tour bus without curving. The tour bus is what you may be sitting in, peering out the windows thinking about how close you are to tumbling hundreds of metres down over terraces, as the driver somehow pours it around the bends like a cross between a boa and a Maserati. Just remember that they regularly drive tanker trucks to and from the quintas that are pasted to the sides of these hills, on the same narrow roads your fat bus is on, is that one oh please no I don’t want to die oh no it was just a little pickup that apparently teleported from the front of our bus to the back unscathed.

12. If you just visit the Ribera del Duero region in Spain, nearer the source of the river, or the Toro region a little farther downstream towards Portugal, you may more likely think it means ‘strong’ or ‘expensive’, as most of the wines around there are one, the other, or both.

13. Put it this way. On two successive days we had lunch near the Duero. On one day we had full-flavoured wines that retailed for under €20 a bottle, some under €10. Strong, rich, but nice. We bought two bottles. On the next day we had four finely crafted wines made at the most beautiful and clean winery I have ever seen. They were all marvellous. They retailed at €30, €40, €100, and €220 a bottle. I would have bought the €40 one but I didn’t have the chance. Just as well. I’d just end up drinking it.

14. Have you poured yourself a glass of wine yet? Get training!

15. I’m not saying you’re going to do insane things like my tour group did, such as tasting 30 wines in three hours. (You sniff, swirl, and spit. You do not swallow a lot. But your tongue is ready to run down the hill.) But be prepared.

14. Those were dry wines, by the way. Mostly red. Tasting 30 ports could kill you. Even if you didn’t swallow. It’s a lot of sugar.

15. The Duero starts in Spain. For a stretch it is the Douro on one side and the Duero on the other, as it forms the border between Portugal and Spain. It runs through scenery that is breathtaking or terrifying depending on where in it you are. It empties into the Atlantic at Porto, where the big port companies have their headquarters. Actually they’re on the south side of the river, in Gaia. It’s a lot of warehouses for storing port. It has more alcohol per square metre than anywhere else in the world.

16. At this point I think you really do need to start tasting Douro and Duero wines if you are to get a good finish on the tasting of this name. I can’t give you that. But I can give you photos. They will give a little bit of the experience. Here they are. If you click on them they will take you to larger versions in the context of my Flickr albums, which include many other photos as well. 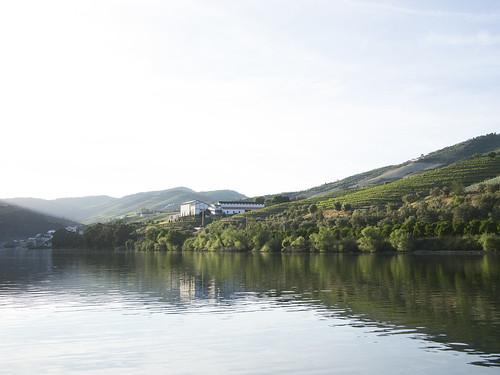 You think scenery like this exists only in ads and movies. Nope, this is exactly what the Douro near Pinhão looks like. 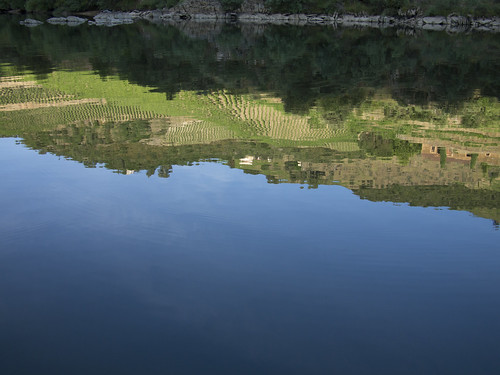 If the scenery looks like this, raise your head some more. 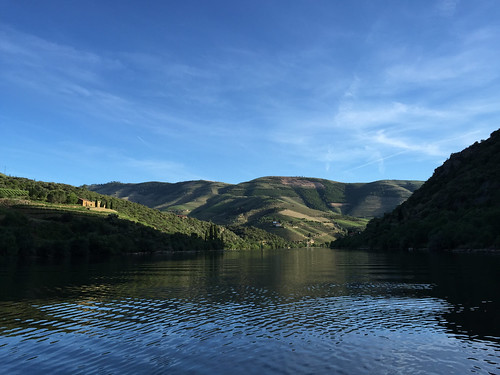 There we go. Wicked scenic, eh? 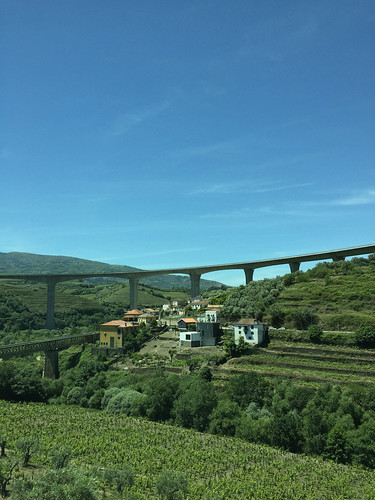 For some reason, people on freeways apparently do not want to have to drive hugging the bends down into the valley and then back up again. But if you are going to visit a quinta, where they make port, you will get to take the little non-freeway roads. Oh yes you will. 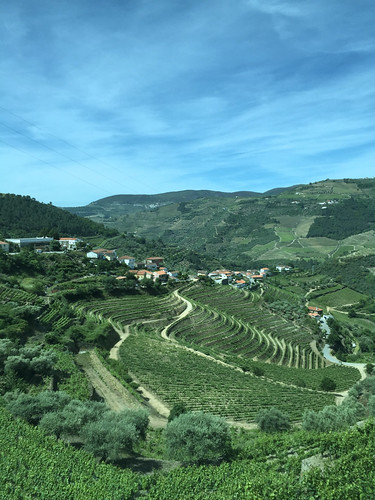 Imagine this is the view from your bus window. You took this picture with your iPhone as the bus sailed around a bend on a road much like the ones you see down below. How much wine do you think you will need to anaesthetize you enough that your back muscles don’t spasm because you are tightly gripping anything near you and you know it won’t help because whatever you’re gripping is going to roll down that hill any second now too? 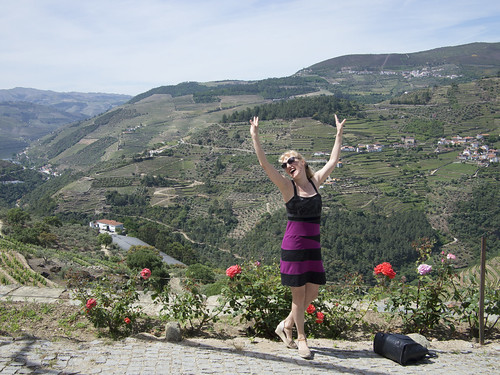 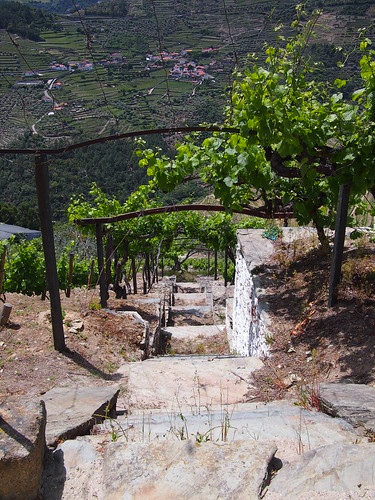 If you have acrophobia or weak knees, you are automatically disqualified from working for a quinta in the Douro DOC. Or really even from visiting it. 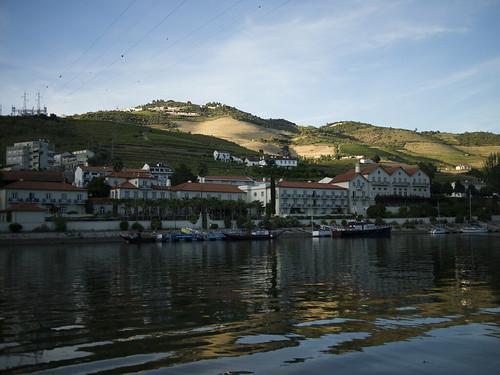 Here is a hotel you can stay in. It does not require driving on cliffs to get to. Much. OK, just a little. 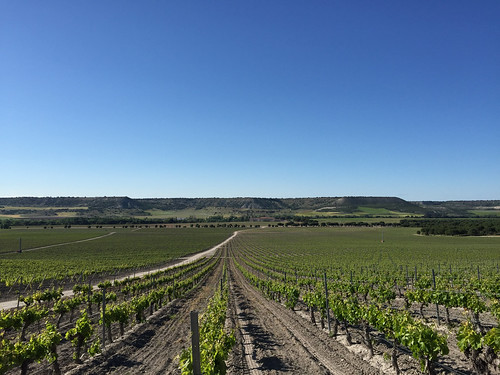 This is the part of Spain the Duero (Douro) comes from. Nothing heart-stopping here. Except for the wine prices.

This is where it ends up just before emptying into the Atlantic: Porto (as seen from Gaia). Hmm. There seems to be something missing. 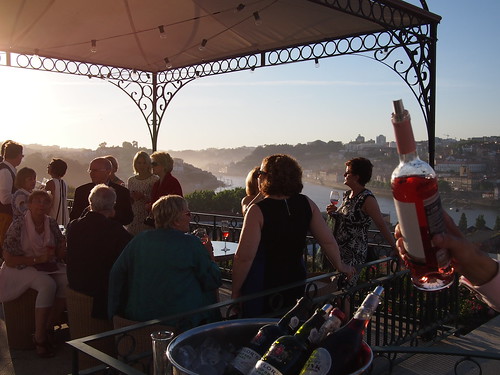 How to get into and out of and around Belgium:

Things to do in Brugge:

How to get around in Brugge:

What to see in Brugge:

What to eat in Brugge:

What beer to drink in Brugge:

What to buy in Brugge:

Where to stay in Brugge: