But what about plural “they”?

This article originally appeared on The Editors’ Weekly, the official blog of Canada’s national editorial association.

Singular “they” is here to stay, and that’s a good thing. There is no decent reason to require that third-person singular pronouns—and only third-person singular pronouns—always specify gender. “He” has never truly covered men and women equally, though starting in the 1800s some people tried to insist that it did, and constructions such as “he or she” or “s/he” are clunky at best. So it’s natural to accept officially what has been an informal workaround for centuries: extending the plural pronoun to cover the singular.

It’s not the first time that English has done this. As early as the 1200s, we started using the plural “you” for individuals of higher status, and by the 1800s, rather than continuing to specify respect—or lack of it—in pronouns, we had almost entirely stopped using the lower-status singular “thou.” If we can use a plural form in place of a singular to erase a status-based distinction, we can certainly do it to erase a gender-based distinction.

But there is one problem that we run into with singular “they,” a problem we have already encountered with singular “you”: how do you make clear when it’s plural?

That’s still a useful distinction, and it’s not always obvious from context. Consider a sentence such as “The CEO met the VPs at a bar, but they drank too much and started singing karaoke, so they left.” If specifying the gender of the CEO is out of the question, to clarify who “they” refers to you’ll need to rewrite it to avoid the pronouns—and if it’s a longer narration, that gets clunkier and clunkier. So what do we do?

Well, what did we do with “you”? For a time—quite a while, in fact, from the late 1600s through the late 1700s—singular “you” got singular verbs: “you was,” “you is,” “you does.” It was so common, Robert Lowth inveighed against it in his 1762 Short Introduction to English Grammar. Even Doctor Johnson used “you was.” Will we try the same kind of thing with “they”—saying “they is” and “they was”? A few people have tried it, but such usages are already strongly associated with “uneducated” English, and so they’re unlikely to become commonplace. And “you was” didn’t last, after all—Doctor Johnson and everyone else ultimately switched to “you were” even for the singular.

So how do we specify plural “you”? You know how: we add further plural specification to it. In the US South, “y’all” or “you-all” is very common, and it’s spreading; in other places, “yous,” “youse,” “you ’uns,” “yiz,” and “yinz” are local favourites. In many other places, we say “you guys” or something similar when we need to make the distinction. And I’ll wager we’ll end up doing the same kind of thing with plural “they.” “They-all” seems readily available; “those ones” and “those guys” are likely to show up; differential usages of “themselves” and “themself” are already in use and may be extended; and others may appear—I’ll be watching eagerly. And in some contexts, for added clarity, something like “the one” might be used for the singular.

What do we do as editors, here and now? We keep an eye on how popular use is changing. When we can, we use our positions to influence it a little. And, as always, we use our judgement to find what’s clearest and most effective for the audience of the text we’re working on.

The stocking-stuffer every writer needs 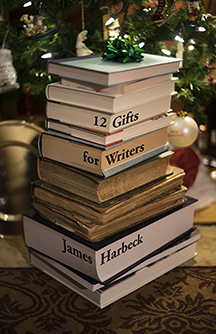 Last Christmas, I gave you my 12 Gifts for Writers, first as serialized blog posts and then as a PDF ebook (it’s also available as an audiobook if you sponsor me on Patreon). This year, I’ve made a print version of it for all of you who like to hold real paper things in your own hands. And I’ve made a few tiny revisions in it (nothing big, but still…).

It’s 44 glorious pages in trade paperback, and all for the low price of 50¢ per gift – in other words, $6 per book (plus shipping and handling). (You want free gifts? Get the ebook.) Buy it now for the writer in your life. In fact, since everyone’s a writer, buy lots of copies so you can give one to everyone you know who wants to write things that people will buy.

Order it from Lulu.com.

How to write gleefully

This article was first published on The Editors’ Weekly, the blog of Editors Canada.

There are times when you want to make your prose more lively – if not flagrantly flippant then at least glancingly gleeful. Your words could land with a thump or splash or flit by with a twirl, but they must be sprightly. You want to write like a child. Well, no, not like a child – children aren’t very good writers; their sense of sentence structure is a bit squishy and scrawny – but like a child would write if a child had the skill of an adult. You want to be extra expressive. END_OF_DOCUMENT_TOKEN_TO_BE_REPLACED

To go with my presentation “Translating medicalese into everyday English,” here’s the article that I wrote for The Editors’ Weekly, the blog of Editors Canada.

People with serious health problems are often subject to novel treatments. But that shouldn’t mean being treated like they’re in a novel. END_OF_DOCUMENT_TOKEN_TO_BE_REPLACED

As promised, I have made an ebook (in PDF) of 12 Gifts for Writers. You can download it for free, pass it around to your friends, and – I hope – gain something from it. Just click on the link:

…Parking the car (smooth sleek shiny grey) in the heated, lit underground lot, though at least a good five-ten blocks away from my destination (I’d have to be lacking in intelligence to be parking it any closer: there are certain rules must abide by in these things), and out once again – though unprotected this time – into the night air (cold & misty) for a little bit of a walk: certainly conspicuous in this, as yer not likes to be finding much of too many anybody out on the streets this time of night (especially in this part of town) without a damn good reason: and if the Men in Pink happen to glance you, you will most certainly be inquired as to why wherefore where when what who you are doing out this time of night, which being the accurate nature of your business, and so on and so forth ad infinitum nauseum et cetera. Goes without saying this being my aim to avoid (perhaps one reason for choosing the darker shades in a suit for wear this eve?).

That bale of braided turds, my friends, is the start of a short story by a writer who’s trying to find his voice. I wrote it when I was 18. END_OF_DOCUMENT_TOKEN_TO_BE_REPLACED

Everybody writes. Did you just tweet something? Post on Facebook? Send a quick email? That’s all writing. It’s all using words. It’s all flexing your lexical muscle. Does it seem too small to count? It still builds up habits and uses your skills. It still displays them, too. END_OF_DOCUMENT_TOKEN_TO_BE_REPLACED

Writing involves facts and creation. You are expected to acquire the former and perform the latter; both are part of the job. The act of creation in writing is largely an act of selection, rearrangement, and re-presentation: showing a new way of seeing with not-new things. And don’t forget that it’s all a conversation – you’re making references to other people’s work as well as to well-known cultural elements (such as the twelve days of Christmas). END_OF_DOCUMENT_TOKEN_TO_BE_REPLACED

9. You’re probably wrong about how good your writing is.

Sit down. I’m going to tell you something I probably wouldn’t tell you directly in person.

You’re wrong about how good your writing is.

OK, you’re probably wrong. A few of you are right, but damn few. I’ve been working with writers for a long time now, and I have observed two general truisms: END_OF_DOCUMENT_TOKEN_TO_BE_REPLACED

I’m sure you’ve heard that it takes 10,000 hours of doing something to become an expert at it. That’s oversimplified, of course; some things take more time to master than others, and some people take more time to master things than others do. Some people practice a thing relentlessly for years and still suck at it. But as a general truism, the more you do something, the better you get at it.

There are several reasons for this. Here are three: END_OF_DOCUMENT_TOKEN_TO_BE_REPLACED