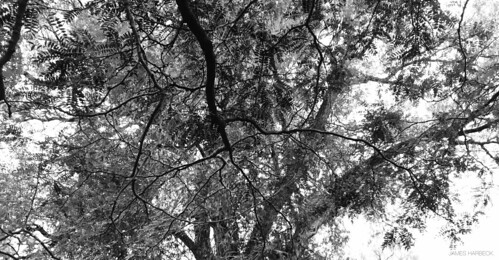 Life’s paths are fantastical and fractious, following not what line some abstract geometer might limn but carving the segments and curves that present least resistance, most opportunity, or simply the most enticing caprice. We are lightning, that kiss of earth and heaven; we are rivers twisting and carving canyons and cataracts; we are tree branches, turning new ways with each season, trying twigs and tangles in different directions until we have extended ourselves in uncountable angles to gather sun and air. Wherever we are going, we will get there, because where we get is where we were going, but where we point at any point may not be the point at all.

And anfractuous is life. We start with this soft article an and then, like a snap of a twig, break off with frac; our tu spells “chew” and our ous spells “us.” Who has manufactured this? How does it turn? Is this u an n and this n a u? Is the sinuous s we see simply the broken back view of an a? The word curves and turns and will not take a straight path. It is anfractuous.

It comes from Latin, suitably modified. The an comes from a root meaning ‘about’ or ‘around’ and the fract from one meaning ‘break’ or ‘bend’ – fracture, fraction, infraction, and also frangible. The verb is frangere; its past tense is fractus. How do you get fractus from frangere? You start by saying the g as “g,” not “j.” Then you add the past-tense ending tus, and the t makes the g harden to c. Then all you need do is reduce the n to a nasalization and then to nothing. And how do you get that g to go from “g” to “j” as we say it today? Simply by saying it farther and farther forward in the mouth in anticipation of the e or i until it’s right at the ridge and it breaks away with a little affrication. You see, these strange transformations all take the path of least effort. They seem inevitable in hindsight. They got where they were going because where they got was where they were going.

There is one poem I can find that carries the word anfractuous. It also embodies it. It is by T.S. Eliot, who has been ashes long enough that I am safe to reproduce it here:

And the trees about me,
Let them be dry and leafless; let the rocks
Groan with continual surges; and behind me,
Make all a desolation. Look, look, wenches!

Paint me a cavernous waste shore
Cast in the unstilled Cyclades,
Paint me the bold anfractuous rocks
Faced by the snarled and yelping seas.

Display me Aeolus above
Reviewing the insurgent gales
Which tangle Ariadne’s hair
And swell with haste the perjured sails.

Morning stirs the feet and hands
(Nausicaa and Polypheme),
Gesture of orang-outang
Rises from the sheets in steam.

This withered root of knots of hair
Slitted below and gashed with eyes,
This oval O cropped out with teeth:
The sickle motion from the thighs

Jackknifes upward at the knees
Then straightens out from heel to hip
Pushing the framework of the bed
And clawing at the pillow slip.

Sweeney addressed full length to shave
Broadbottomed, pink from nape to base,
Knows the female temperament
And wipes the suds around his face.

(The lengthened shadow of a man
Is history, said Emerson
Who had not seen the silhouette
Of Sweeney straddled in the sun).

Tests the razor on his leg
Waiting until the shriek subsides.
The epileptic on the bed
Curves backward, clutching at her sides.

The ladies of the corridor
Find themselves involved, disgraced,
Call witness to their principles
And deprecate the lack of taste

Observing that hysteria
Might easily be misunderstood;
Mrs. Turner intimates
It does the house no sort of good.

But Doris, towelled from the bath,
Enters padding on broad feet,
Bringing sal volatile
And a glass of brandy neat.

This entry was posted in Uncategorized and tagged anfractuous, word tasting notes. Bookmark the permalink.