I’m going to try a special feature every so often, at least if people like it. It’s called from the bookshelf. I’ll take a book off the shelf and find a word in it to taste, and add some bibliotechnical cheesecake shots while I’m at it.

I’m going to start with one of my most alluring volumes, part of a two-volume set of Paradise Lost that I saved from perdition at Tufts University two decades ago (it was part of a bequest but was not needed and, frankly, would not have survived in a circulating collection).

It has illustrations by John Martin and was published in London by Septimus Prowett in 1827. 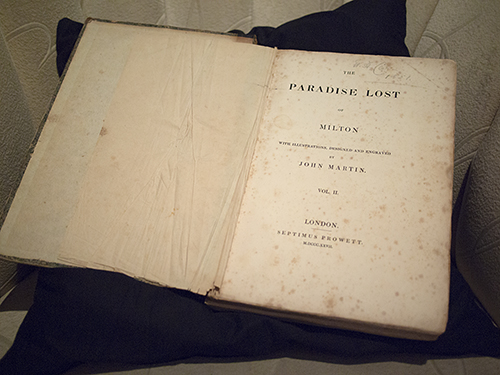 It has the dusty-honey smell of an old book, with those age spots called foxing. Open it carefully; the binding is falling apart, though the pages are still strong. It is tempting to think of it as like a smudged old window, the glass rippling, the view obscured. But the words on the page are there as plain as any day, and when you can read them you can see with the clarity of the mind’s eye into the world it describes.

Let us turn to page… 27. O look, they put spaces before colons and semicolons and exclamation points! And larger spaces after them and – is it? – a double space after a period. Double at least. A space as wide as the sea and more transparent.

The sea? The glassy sea. Line 619: “On the clear hyaline, the glassy sea”… We have our word: hyaline. A word that rhymes with violin. What note does it play?

Is the glassy sea the hyaline? Is it then the high line? It is haline – salty, that is. It may be healing, but it may consume you. Not this sea, though, this glassy sea, this clear hyaline. It is as smooth as water in a glass, and as clear as a looking-glass. It may even reflect.

Which would be why we see the sense and then the same sense again. Hyaline, you see, comes to us from Latin hyalinus, which (as the y should tell you) is a loan from Greek, where the original root is ὕελος huelos ‘glass, crystal’ – a word that Greek may have gotten from Egyptian. A word, then, that has sailed on the Mediterranean, smooth or rough, more than once.

Glass and glass again. Elegant variation, ramified repetition. Use of a fine and pricey word, and then explanation of it with plainer stock. And that poetic trick of taking an adjective and using it as a substantive noun. Milton was not the only to use hyaline this way, though perhaps the first, but its longer and fuller history in English is as an adjective. It means, as the OED says, “Resembling glass, transparent as glass, glassy, crystalline, vitreous.”

Transparent not as the pages of a book, nor as an old and foxy word that requires looking up, but as plain text that, once read, shines an image into your mind. Or as a camera lens, letting the image pass through and be recorded to be re-presented to your own eyes, with their lenses and their vitreous fluid. And, so launched, it sails on them.