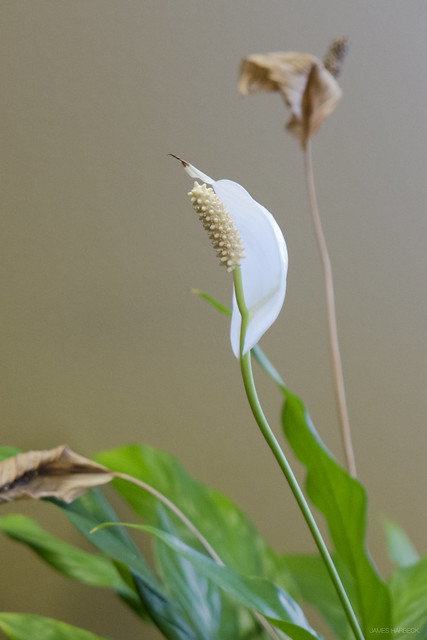 Some things just are as they are. They justify themselves by themselves for themselves. They exist for their own reasons, but they are exigent. They may be long, they may be complicated, but for all that, they are beautiful. They cut like a blade but caress like a leaf, soft, in liquid whispers. And even when they are done they are not done; they stand statue as a memory of what they were and still are.

Such ones may to their friends and servants seem drama queens – or contrarily peaceful. All is possible. But do not ignore them for too long.

I have two of these plants in the office where I work.

I have quite a few plants in the office where I work, all inherited from one person or occasion or another. They’re mine now; I water them, and if I didn’t they would simply die. There are four poinsettias, growing crazy; two philodendrons, bent on world domination but lacking support; a cactus; a polka dot plant; a phalaenopsis orchid, identical to the day it arrived years ago; a few other plants the names of which escape me; and two plants that I have long called the drama queens.

The drama queen plants grow in a lively shock of stems with hooded blooms here and there. If you forget to water them for a day or two too long, they droop appallingly, mournfully, like a fourteen-year-old who is bored and hot and tired and ugh I am simply going to die. They truly do look dire. But water them and within a few hours they have perked right up again, as though nothing had passed.

I took a photo of one of them and posted it on Twitter, trying to recall its formal name. Sylvia Hunter obliged: it is a peace lily, or, technically, spathiphyllum – not really a kind of lily (less deadly to dogs and cats, for one thing, though you still ought not to eat them).

They are such a romance of a flower. The stems grow long and beautiful, topped with a ceremonial mace or corn cob of a pollen pod, hooded in the most elegant white. So pure, so simple, so desirable. Over time they dry to a sere brown, still wavy and veined, and the pollen pod sprinkles its white dust everywhere like a sentimental chef making dessert pastries. Juxtaposed, a new bloom and an old one seem the phases of life, or a May-December romance, or perhaps that is really what life is, youth and age yearning to be each other. But beneath all this is a tangle of leaves, a wild, winding jungle, hard to penetrate or trace paths in; you will never get all the way to the roots. Without those leaves, it would all die, but the leaves are so… unresolvable. 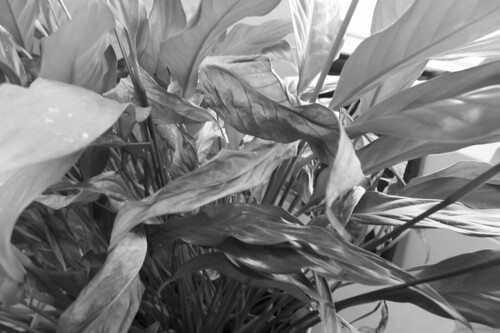 The peace lily. For the lovely top to be at peace, there must be turmoil below. Turmoil like the millefeuille pastry of the taxonomic name: spathiphyllum. What does that word mean?

We can see that it comes from Greek. We may remember the phyll from chlorophyll and phyllo pastry: it means ‘leaf’. But spathi–? It means ‘spathe’. It is what it is.

Do you know what a spathe is? Does it seem at all self-regarding to define spathi– as ‘spathe’? Will it help if I tell you that spathe rhymes with scathe? No?

Well, then. A spathe is a large bract. Does that help? Wikipedia and the OED both seem to think it will. But perhaps you don’t know what a bract is, because you are not a botanist. I will tell you: it is a modified or specialized leaf. A spathe is a large one that provides a shield or hood. At the beginning, the blossom of the spathiphyllum is entirely enveloped by its bract; at length the bract unfurls to reveal the nude heart, as a cinema starlet unwinds her fur.

So this plant is a spathe-leaf, which sounds marginally better than a bract-leaf. The word spathe comes from a Greek word for ‘broad blade, broad piece of wood, that kind of thing’ that is also the root (via Latin) of spatula. And the starlet, the pollen pod that sends its fairy dust over all as a dying farewell? That is called a spadix. 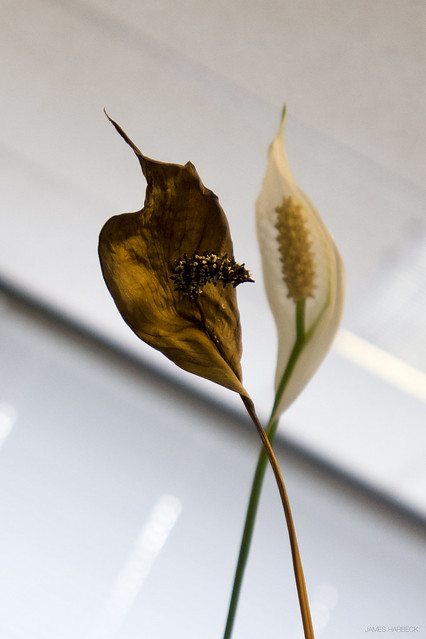