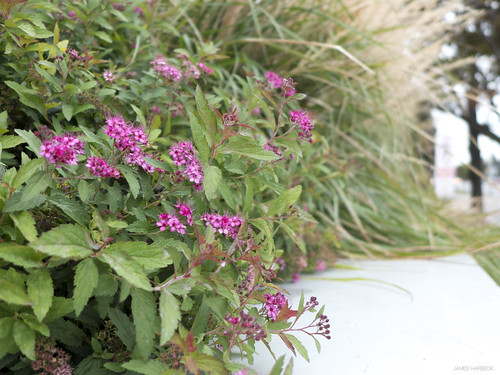 In front of the building in which I work is a well-tended bed of plants, nicely coiffed in its long box bordered with metal cladding. Some are prairie grasses. Others are hardy, enthusiastic eruptions of spearmint-like leaves with tiny flowers toned in that purple that theatre lighting technicians know as “surprise pink” (also, less officially, “FM pink,” and the FM does not stand for frequency modulation but is a reference to how attractive it makes the complexion). On my way in and out of the building, passing them at eye level as I walk on the small pavers before the boxes, I find them anodyne or at least analgesic, and in some ways positively inspiring. Such little pops of prettiness, purple spurs daring the suburban cityscape… no discarded coffee cup can conquer.

However, I suck at knowing plant names. Plants don’t care about their names, so why should I? I know them by sight. I know words well enough to know their limitations (a picture is not worth a thousand words; there is no exchange rate – besides, for any word in the language I could find a thousand pictures). But every so often I find that I want at least to know what people call something (see parthenocissus). And so I posted the photo above on Facebook and asked, and Jennifer McIntyre informed me that it is spirea – Japanese spirea, to be precise.

Spirea! Also spelled spiraea. Pronounced /spaɪˈriːə/, which is to say “spy rhea.” One may wonder if it is a synthesis of spy and diarrhea, but that would be spurious. A relation to spiral? Not spurious; they both trace back by way of Latin to Greek σπεῖρα speira ‘coil, twist’. But never mind this mortal coil. These flowers are more of a divine inspiration.

Inspiration? Such a word. Different people find different inspirations in different ways. When I want to write something, I go out looking for inspiration like harpoon-holding Ahab, ready to spear any spermaceti-filled cetacean but confident I will in the end master that one white whale. When I want to take pictures, I don’t expect inspiration at all; I am like a calf-roper, lasso at the ready. But when I want to seek a prophylaxis against improving my context, or simply want to dream about desiderata well beyond my means, then (as likewise for many on Pinterest, apparently) “inspiration” is the order of the day – pretty pictures and plans for things that would take too much effort to gain, but the having of the picture, the “inspiration,” gives me a momentary sensation of the goal, a little pipe dream… an opiate.

As, perhaps, are these flowers. I have said they are analgesic, even anodyne. Could they be narcotic? Likely not – they’re not poppies. But while they lack opium, they do have aspirin. In Canada Aspirin is still a trademark, but in the USA it lost that status during World War II because its owner was Bayer, a German company, and so they lower-case aspirin as the generic term, while in Canada the generic term is ASA, short for acetylsalicylic acid. But do you see a spir in aspirin? It is indeed the same as in spiraea, and the flower name is the source of the drug name. Spirea contain salicylates.

Not that I need to eat these flowers to cure headaches. Just the sight of them and their little purple spurts – first spheres, then spears – eases the blood, sweat, and tears. Sometimes it’s the small things that make the difference. And these spirea are small. Yet they can aspire to greatness. 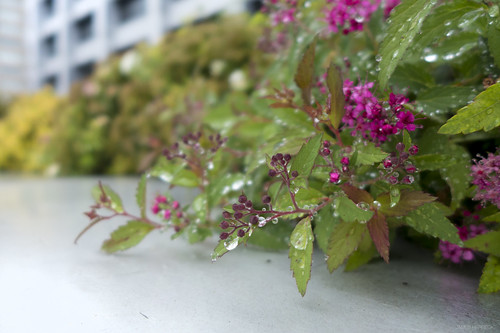