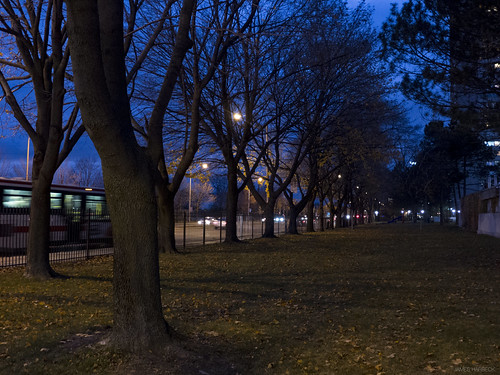 Suddenly it is fall. It has crept up on us. And so much sooner every day it is night. I set out from the office as the golden hour of the sun projects stark fame on the faces of the high-rise apartments, and by the time I am awaiting my bus a kilometre farther south the light comes from the thousand electric fires of street lamps and headlights. The sky aches in iridescent ultramarine and at last surrenders to the… I would say to the stars, but in Toronto they, too, lose to the sodium aura from below. The moon holds its cold throne as duke regent, but all it is able to do is shiver albedo.

The absolute rule of the sun, the glowing solitary monarch, is suspended. Light comes from this point and that point and the other point. Relativism reigns; the angels of the morning are fled and the opposing angles of evening light fight and play with each other. Shadows are darker. The sun has fallen, and the reign of the day has fallen with it. And with that, the night also falls, like a thick curtain with a frayed fringe.

Night. Fall. Two soft, half-whispering words as old as the language, changed only slightly in form by time, now conjoined. Their first date as a couple is 1611, naming fruit that has fallen from a tree during the night. To mean ‘sunset’, the compound is known from about 1700 in the records of the Oxford English Dictionary. The image is surely older.

But how does night fall? Where does it fall from? As we stand on our planet, if we choose to look away from the setting sun, we see that the darkness is growing on the eastern side. The darkness sweeps up and over the zenith and washes at last down the other side. It is not a fall; it is like a blanket pulled over a dome. Pulled by the fall of a sphere. 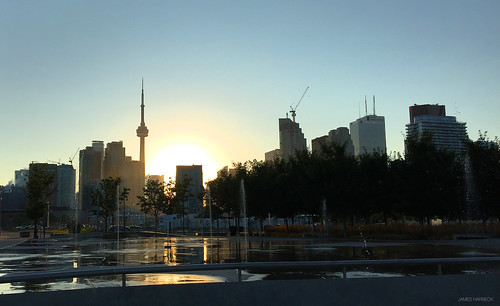 Only a blanket has weight, just as things that fall have weight. Darkness may seem dense, but it is really nothing. It is not something that is there; it is the absence of something. It is of no matter; it can be anywhere at any time at any speed. It is not heavy. It is light. The sun is heavy: it sinks.

Light has no weight, of course; if photons had mass they could not move at the speed of light. You can’t be heavy and be light. But you can be heavy and be a source of light; indeed, much light comes from heavy things. Darkness, on the other hand, comes from nothing at all. You may use a heavy thing to stop the light and cast a shadow, but the heavy thing is not sending darkness, it is just stopping light. And then there is nothing: night is naught.

Night hasn’t fallen. It hasn’t risen either. It’s just what’s left when the source of light has fallen. Or been turned away from.

Because of course that’s what nightfall is: earthturn. If you go far enough north, you see it more clearly. In the summer, the sun makes a tilted circle and barely touches the horizon; as the year draws on the circle lowers gradually until it is below the horizon most of the time. In Iceland they don’t say “24 hours a day”; they say alla sólarhringinn, ‘all the sun’s ring’. Sunspin.

We may as well think of the sun as sailing away from us over the horizon. The sun leaves and night is what is left. 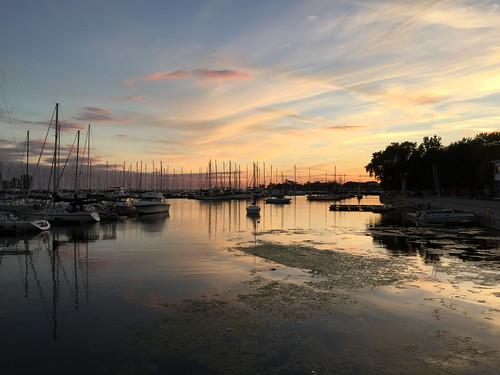 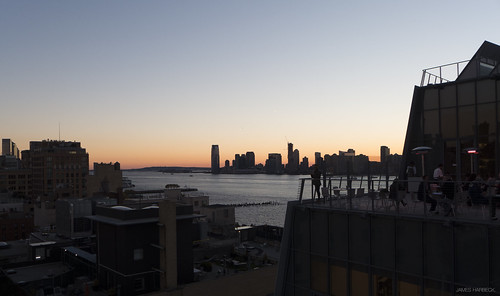 The sun is glorious, of course. It fuels life. We would be colder-hearted than Pluto without it. But the sun is a bully, a dictator, a satrap. It gives so much light that other lights can’t compete. The stars don’t come out at night; they’re there all day too, but the sun outshines them… because we are so close to it. On a planet circling a different star, our sun will be just another twitching dot visible in the distance only when the local orb is not. The relativity of night is just what was already there but visually indifferent in the solar onslaught.

Well, what was there plus the lamps we light. 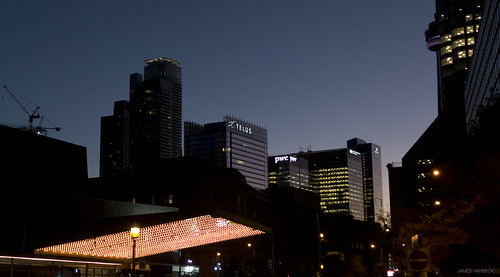 Nightfall is not a falling of darkness but just a revealing of what else was there. But nightfall is a fall. The day is like summer, and the light leaves. Which is to say the light is like leaves, and then like leaves it leaves: it turns yellow and orange and red, and is last seen at ground level. Nightfall is fall. The fruit drops and goes to seed. The night is winter. Dawn is spring. And so we play around the ring.

And once again I await the transit. 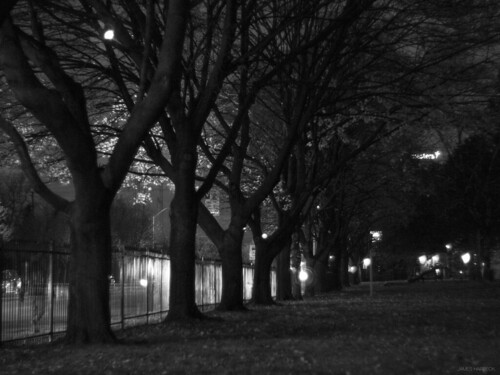