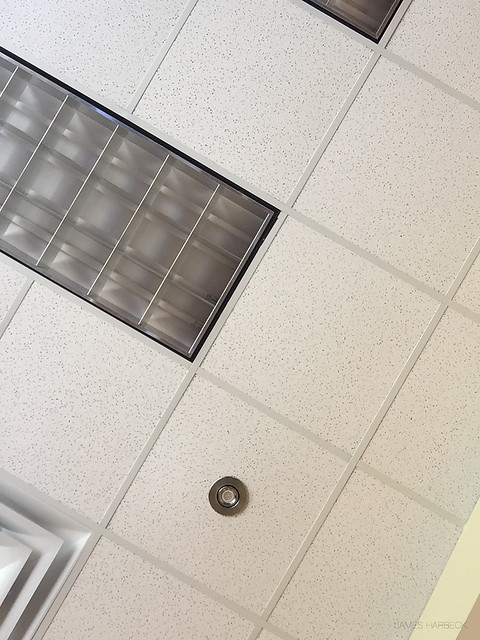 We all know what a selfie is. The word first showed up in the early 2000s in Australia to refer to a self-portrait taken with a cell phone camera. Selfies are so completely associated with cell phone cameras that some people have spelled the word cellphie, and I suspect the phonetic connection has had a role in the success of this word.

Self-portraits have existed for much longer, of course, but a selfie is a product of the technology of our own time. A self-photograph requires you to be reasonably sure of the focus and to frame yourself suitably well. For the individual grab shot it means the camera has to be able to focus on you at arm’s length (selfie sticks are a new thing).

Cameras with timers on them are not new; people have long set up a camera and focused it and put the timer on and gone and stood at the focal point and been photographed by it. But once cameras were added to cell phones, it was natural for people to realize quickly – almost by reflex – that these (initially) fixed-focus cameras with very small sensors and wide-angle lenses would be able to put them in a picture at arm’s length with some of the background. Soon cell phones with cameras had small mirrors next to the camera to allow this (the second cell phone I ever owned had one such).

And then the iPhone added a second camera – or, anyway, a second lens and sensor, with the remainder of the hardware and software being shared – facing the user. A diminutive sensor, lower resolution, low-quality image compression, but sufficient to the purpose. The narcissism of the selfie-taker, such as it may be, does not seem to require high resolution. At least for most people. It just requires the resolution to capture one’s own image. It may be a derivative act with a derivative camera, but the homunculizing urge seems endemic and perhaps innate to humanity.

Self is a reflexive first of all, cognate with (and closely resembling) similar words in other Germanic languages (compare German selbst). The noun form the self followed on from my own self, his very self, and other such extended forms of the reflexive. The ie is a suffix indicating the diminutive and the derivative; it’s especially popular in Australia (as in barbie for barbecue; another popular suffix there for about the same function is o).

But the selfie camera on a phone, now that it exists, does not have to be used for selfies. Things may be used for purposes other than those for which they were designed! Language isn’t the only thing that takes existing bits and uses them in novel ways. It happens that nowadays, with our flat phones, it is common to have your phone near you on a table, face up. The regular camera is facing the surface in darkness, but the selfie camera is looking directly up at the ceiling, something that humans seldom do – we may glance up at an oblique angle, but to survey it perpendicularly is a thing generally associated with a supine position that is seldom socially appropriate in adulthood.

But what if you were to turn on that selfie camera while the phone is sitting on the table and take a picture of what it sees?

What would you call this? A ceilfie, of course, using that blending we like to do of part-words on the basis of sound. Ceiling: a word that will probably make any French speaker think right away of ciel, ‘sky’ or ‘heaven’, from Latin caelum, but may also draw on the same origin as conceal, the Latin celare ‘cover’. It is abstracted either way, but fair enough: a ceilfie is rather abstract in itself. 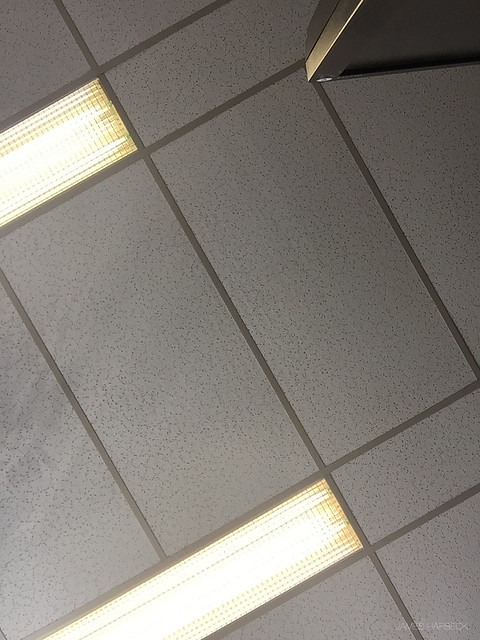 Ceilings are, after all, typically evenly patterned. Few of them are carefully decorated. Add to that the particular qualities of the selfie camera on a phone: it’s low resolution and low-quality compression, and so at any real magnification looks as much like a careful watercolour as a photograph; and its lens tends to get smudged, especially if you keep it in your pocket (as I do), giving it a cloudy, smudgy, smeary look, with streaks coming from the lights that are usually in the picture when facing up with a wide-angle lens. 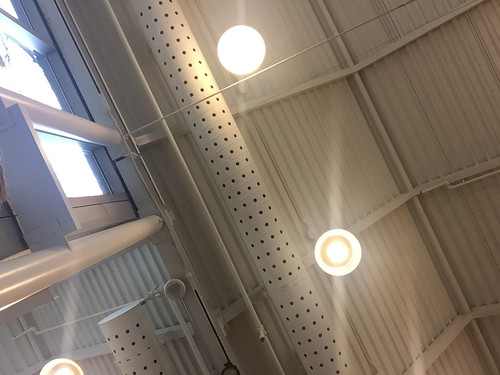 Ceilfies may include the sky, depending on the nature of the ceiling above you. Taking ceilfies really helps you become more aware of the upper side of your world. But it also has aesthetic appeal. Those who like abstract paintings may well enjoy the patterns ceilfies reveal. 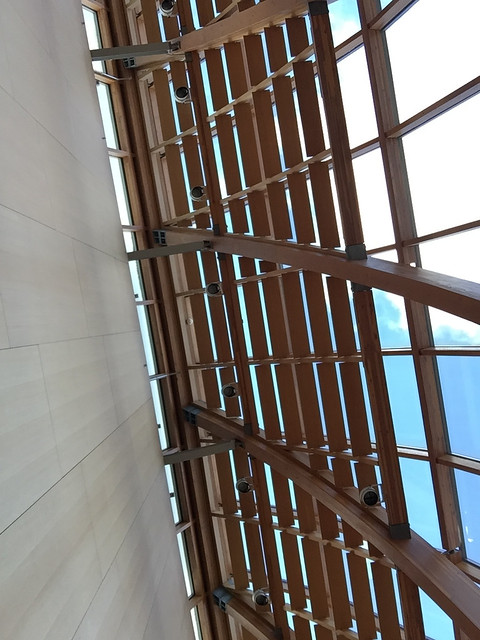 Since I have (as far as I know) invented the thing, I am propounding the following rules for celifes: You have to set your phone on the table with the camera turned off, just in whatever place you put it. It’s best if you don’t even think of taking the ceilfie until you look at your phone sitting there. You can’t move it; no framing allowed. Turn on the selfie camera and take the picture, making sure that your face isn’t in the picture.

That’s all. You can adjust colour or contrast a little afterwards if you want, or even convert it to greyscale, but anything more than that and it’s something beyond a ceilfie. Which doesn’t mean it’s not interesting, but the point of ceilfies (to my mind) is that what’s there is interesting enough without having some aggressive filter applied to it – just a bit of image alteration through the reduced resolution and clarity. 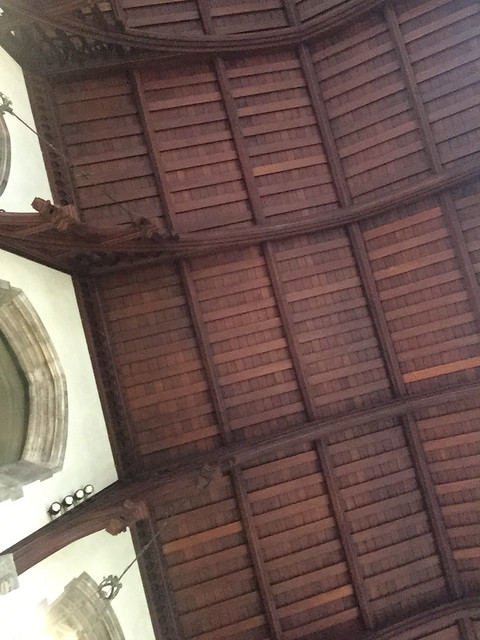 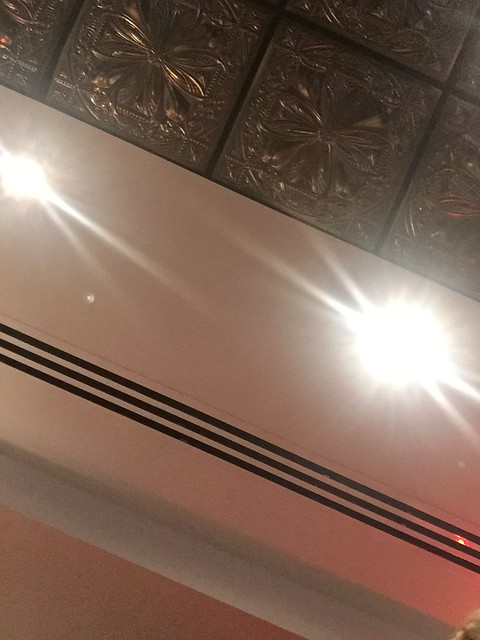 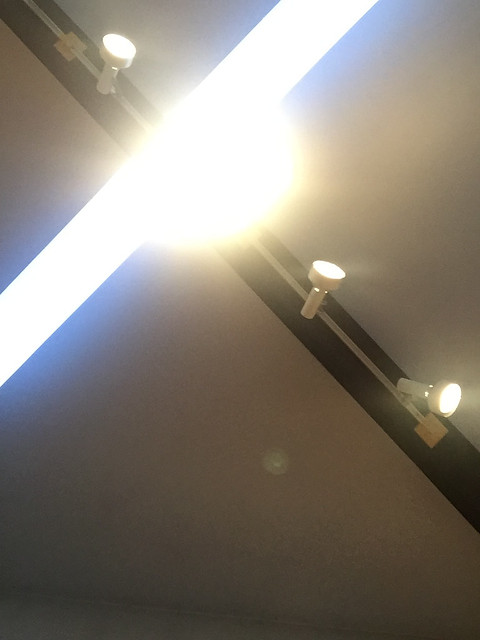 And sometimes you may even capture someone else, perhaps looking Kilroy-ish over a balcony edge. 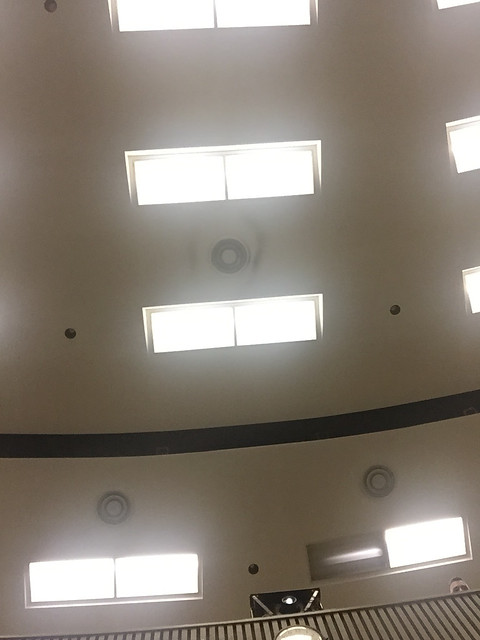