I have always been far-wandering, even in enclosed spaces. I have always welcomed the exquisitely extrinsic. You may say that I am to some extent xenophilic. It was natural that, when I was in university, I would at times cruise the shelves in the library looking for books that could be new friends and fascinations. I would look up a title on some subject of interest, and then I would explore its neighbourhood. This is so much easier with books than with people: you can’t, having visited a friend or gone on a blind date, simply knock on neighbours’ doors to see who else might be fun. There is something stochastic about such human propinquity anyway: aside from a desire and ability to live in the same part of town, neighbours may have nothing at all in common. Not so with books. They stand in ranked parade, spines in line, and you can easily find several to pull out and get to know better. You don’t know what you’ll find until you look, of course, and you will always have to make choices: you simply can’t read them all – there aren’t enough hours in your life. But some, when you open their doors, reach and grab your shirt or neck or hair and pull you in. And some of those turn into lifelong companions. You can’t keep the library’s copy, of course (no, you can’t, and I will be displeased with you if you think otherwise), but you can buy your own copy thereafter. I have a few books on my shelf that I came to know through the university library.

I can picture the original of this one on its shelf, on the left as you face outward towards the window to a view over the hilly housescapes of northwest Calgary; on the same row as works by and about John Cage (which was who brought me to the neighbourhood), a shelf or two along from the inside end, about halfway from the floor to the ceiling. (Any book I have ever liked in a library I could walk up to and pull off the shelf thereafter almost without looking.) I read it through. Some time later, I bought my own copy in paperback (the university’s was hardcover). I think it likely that I ordered it in. Here is where it sits on my shelf, not far from a window with a view of the concrete cliffs of downtown Toronto but not in sight of it. 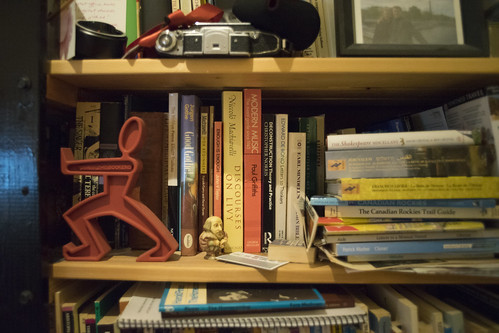 And here is the cover. 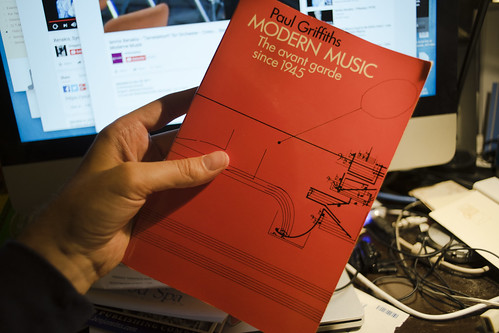 How could I not be interested in the avant garde? I am the sort of person who throws open the front doors of books as they rest quietly in their neighbourhood. I am the person who made, in hand calligraphy, a poster that said “If at first you don’t exceed, try, try again” – and I did not mean it in the business “Did we exceed your expectations?” sense.

Let us wander through this palace of text about music, this guide to the avant-garde of sound that presents the subject silently, to see what synaesthetic or transaesthetic stimuli it may present. Understand as we do so that I was not a highly skilled musician; in fact, I was a rather lazy one, and would not have gotten into a university music program. No matter; I was a drama student, and loved the idea of these musical adventures.

The book is illustrated with images from scores. It starts out innocuously enough. 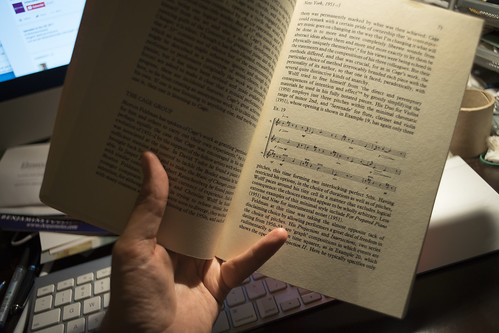 At this point the text is more intriguing than the score. “Wolff tried to free himself from ‘the direct and peremptory consequences of intention and effect’ by grossly simplifying the materials he used in his fully notated pieces.”

Flip over the page. 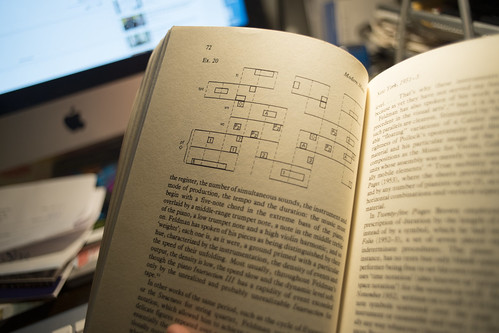 Well. That’s a little stranger. It looks very mathematical but in fact it leaves much room for interpretation, as the score says. But wander on: turn one more page. 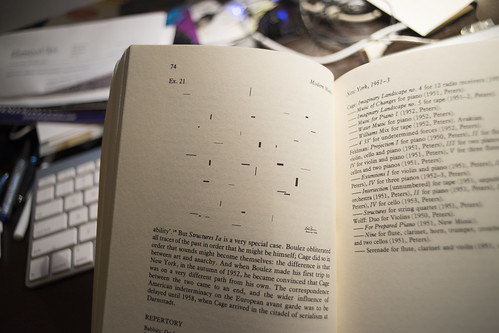 That, too, is a score (for December 1952 by Earle Brown). How does one interpret it? Each player will do it differently. Players with more learnèd backgrounds and more skill will likely do more proficient and impressive things with it. Rank amateurs with no discipline are unlikely to produce a result worth listening to. But it uncages the music (even as it John-Cages it – Brown was part of the same set as Cage); it makes it a Calder-style mobile that relies explicitly on judgement, intervention, interpretation.

Cage, for his part, loved to experiment with chance and the mapping of other areas to music. Star maps, for instance, as with Atlas eclipticalis. 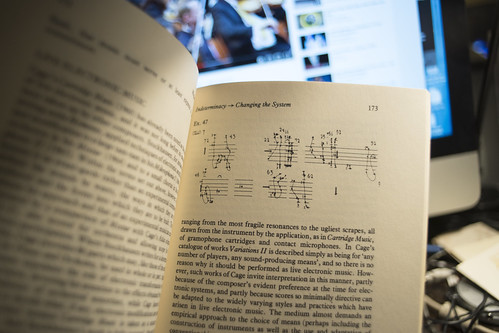 The composers’ peregrinations were not just in the written indications. They were in technique as well. And sometimes that called for new approaches to the scoring, like this from Penderecki. 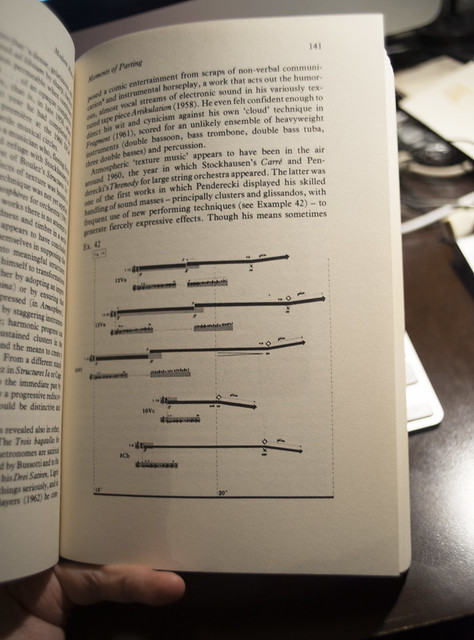 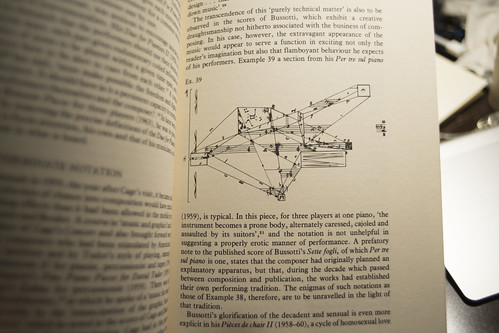 This was all fascinating, of course, but I was familiar with Cage already, and would inevitably have met Stockhausen and some of the others. The section of this book that is most memorable to me – the one I think of first when I think of this book – begins like this: 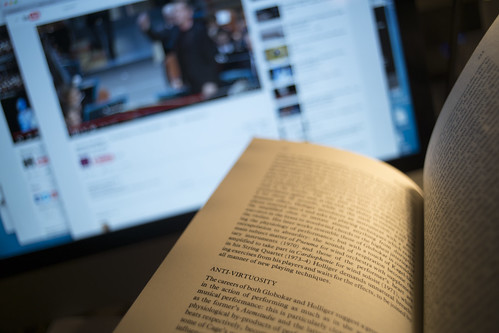 This doesn’t mean that everyone should play badly. It means that the scores are designed to defeat even the best players. Whereas scores such as Brown’s and Cage’s encourage the players to invent and fill in, the anti-virtuosic scores give more than enough and it is up to the player to decide what will be left out. A decade later I would learn that this was a necessary approach in scholarship too: when you write a thesis, you can’t be exhaustive or you will be exhausted (and your readers will too). You have to decide not only what to put in but what to leave out.

And that is where I saw this. 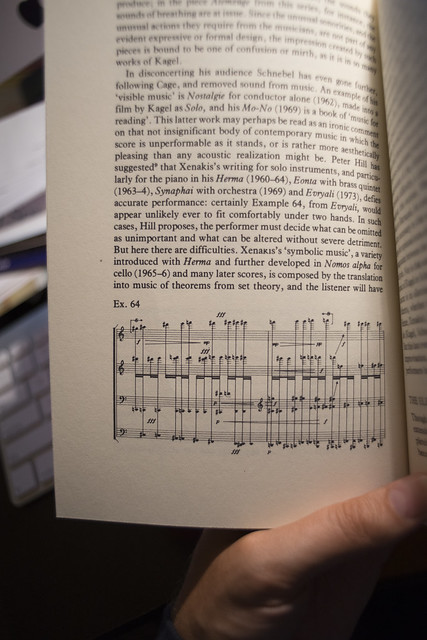 Griffiths tells us (as if we don’t have eyes, or just for the sake of saying it) that this “would appear unlikely ever to fit comfortably under two hands.”

The sight of the score has surely gorgonized you; those racked-out stems may as well be abstract expressionist snakes on Medusa’s head. But the piece can be played. Here, look, and listen:

It challenges you: can you even hear it all, take it all in? If this score is a neighbourhood, can you walk every alley? Or are you afraid of what may await you down one of the darker ones? Something strange, perhaps, and unwelcoming? You know you will have to choose what to attend to and what to let fall.

This piece is Evryali by Iannis Xenakis. If that seems like Greek to you, you have it exactly. Evryali is a modern transliteration of a name more commonly rendered Euryale from the classical pronunciation; the original is Εὐρυάλη, which means ‘far-roaming’. It was the name of the middle of the three gorgon sisters. The youngest and most famous of the three was Medusa, famously decapitated by Perseus with the aid of an ocular prosthetic (his shiny shield). Medusa was mortal; her sisters, Euryale and Stheno, were immortal, so Perseus avoided them altogether. He had one thing he needed, and he took it; he was a simple careerist, focused on getting ahead. No room for feelings or far-roaming explorations.

Why does the score look as it does? It is not simply to confound the player; after all, pianists do practice – concerts aren’t cold readings. Xenakis divided the staves between different parts of the hands; in some scores he had a separate staff for each finger. But Evryali is not playable as written; the pianist simply can’t reach all the notes as indicated. There will always need to be interpretation. The intervention of the performer, which in truth is inevitable, is forced to be explicit. At the same time, the audience member, who is the receiving host of this visitation of notes, is forced to relinquish an accounting of every note and follow the overall shape and flow.

Here is a relevant quote from an autobiographical sketch by Xenakis:

These uncertainties in the appreciation of music are not restricted to contemporary music. I have encountered the same variations during performances of works by the classical musicians I prefer: Bach, Beethoven, Brahms, Monteverdi, Chopin. Music does not transmit a representation in a direct and immediate way. It acts more as a catalyst. The composer chooses his music because it creates in him, via the ear that detects repetitions and symmetries, an effect that promotes expression of his representation. This music then sets off in the listener a psychological effect that may be close to or far from that which the musician has felt. Moreover, music comprises several levels of comprehension. It can be sensual and only sensual, in which case its effect on the body can be very powerful and even hypnotic. Music can also express all the facets of sensitivity. But it is probably alone in sometimes arousing a very specific feeling of expecting and anticipating mystery, a feeling of astonishment, which suggests absolute creation, without references of any kind, like a cosmic phenomenon. Some forms of music go further, drawing you intimately and secretly towards a sort of gulf where the spirit is happily submerged.

I’m not surprised if you skimmed some of that. That’s how we read these days, isn’t it? That’s also how you must listen sometimes. Allow this piece to spread through your awareness:

Who was Xenakis? He was (among other things) an engineer, and an assistant to Le Corbusier; they co-designed the Dominican priory of Sainte-Marie de La Tourette, among other buildings, and Xenakis by himself designed the Phillips Pavilion at Expo 58 (see this MIT course handout for a picture of it, a plan for it, and a similar-looking score by Xenakis). He had a lifelong love of music and went back into it, becoming one of the most important composers of the 20th century – which, of course, does not keep his name from being a stranger to many.

Which is only fitting. This name, Xenakis, Ξενάκης, pronounced like “kse-na-kis” (yes, you have to say the “ks” at the beginning; no, you may not say “z” instead, tough it out, the Greeks can and they have the same mouth muscles as you do), is formed from two simple Greek parts. The suffix, -άκης, is a diminutive suffix and is also used in forming family names. The root is – as far as I know, anyway – ξένος, which shows up in English in various xeno- words. It means ‘stranger, foreigner, guest’ – and sometimes ‘host’ too, inasmuch as the host and guest are equally strangers but equally bound by obligation of welcome. We may think strange is meant to be a bad thing; we see the word xenophobia. But xenial means ‘welcoming, hospitable’, as we are supposed to be to our guests (although not all people are equally so). So, in a way, Ξενάκης is ‘a little stranger’.

Small wonder, then, that the work of Xenakis seemed so simultaneously strange and inviting to me, as I in my wanderings came to its door and was drawn in on sight – and, later, on sound.

Here is a good article on the music of Xenakis. And here are a couple more videos of his works. You may or may not like them. It is always up to you; the performance, after all, arrives in your head, whether or not you have a bed made up for it.