Our northern Italian transect culminated in Milan, city of millionaire milliners, the Toronto of Italy. Neither the prettiest nor the ugliest of cities, but an oversized cutlet of urbanism and urbanity plated on a broad plain, breaded with money and spiced with art, education, society, alcohol, and fashion.

Milan has been there since forever, in the middle of that plain. A common derivation of its Latin name, Mediolanum, means ‘middle of the plain’. It’s tempting to say it’s a plain city, but while it may be relatively plain for Italy, it’s still far more presentable than, say, Indianapolis or Winnipeg. And it has long been a magnet for power and money. The Castello Sforzesco is there to help you remember that fact. 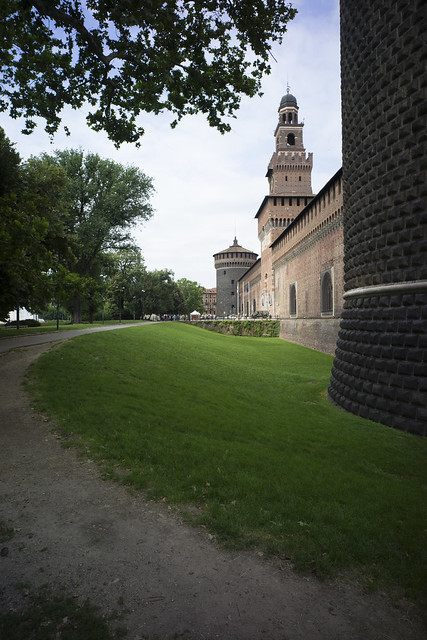 From there you can walk along Via Dante and Via dei Mercanti, past all the stores, to the heart of the thing: the Piazza del Duomo. 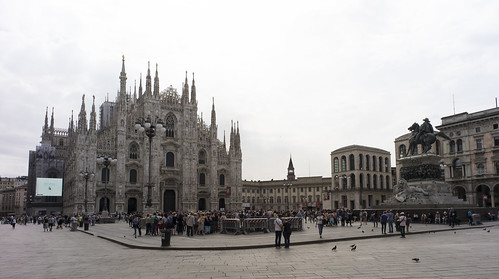 You can see that the statue horse under the statue dude on the right is frightened by the festival of fancy spikes it sees before it. And also maybe by the crowds: the line just to get a ticket to be let into the line to get into the duomo (cathedral) was a solid block long, almost Godardesque in extent. 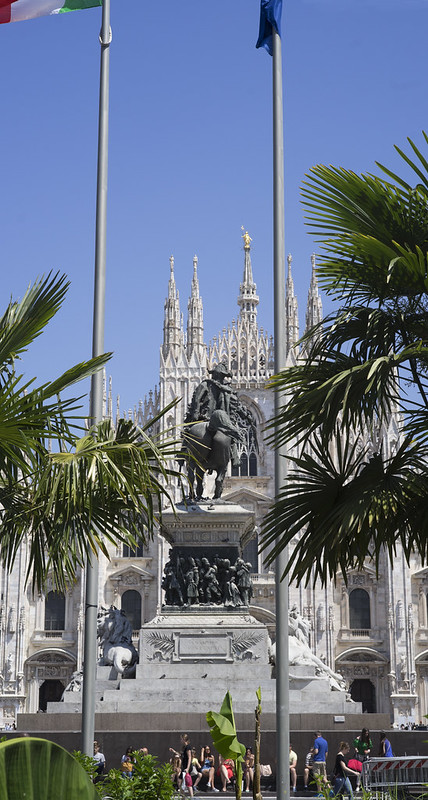 Or maybe the horse is spooked by that golden madonna on the top of the highest spike. I’m not sure how the palm trees, a gift from Starbucks for letting them open a store there (which is like opening a Taco Bell in Puebla or, um, a Starbucks in Italy, for heaven’s sake), are affecting the beast or the assorted tourists seated beneath its upturned tail. (The second photo is from two hours later. The sky cleared.)

We were with a group and had tickets in advance, so we had much less wait time to get in. The cathedral is, as expected, exalting, and, as is also to be expected, took exactly forever (6 centuries at least) to build – providing you can consider it finished, which I’m not sure it truly is. It is the largest church in Italy. (The pope’s place, St. Peter’s, is in the Vatican City, which is its own separate state. You knew that, right?)

People come to look up to the stone-and-glass heavens. 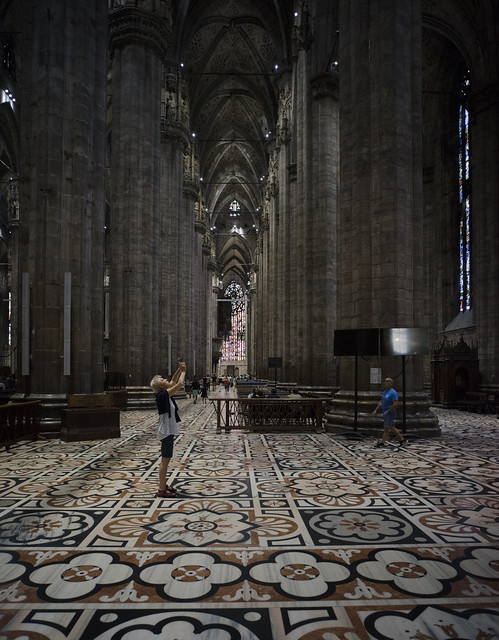 There’s even a sort of gaudy mechanical nimbus the bishop takes up to ceiling level once a year.

There’s a statue of St. Bartholomew, who is holding his own skin. I’m guessing he’s on the way to have it altered or to swap it in for the new season’s latest. 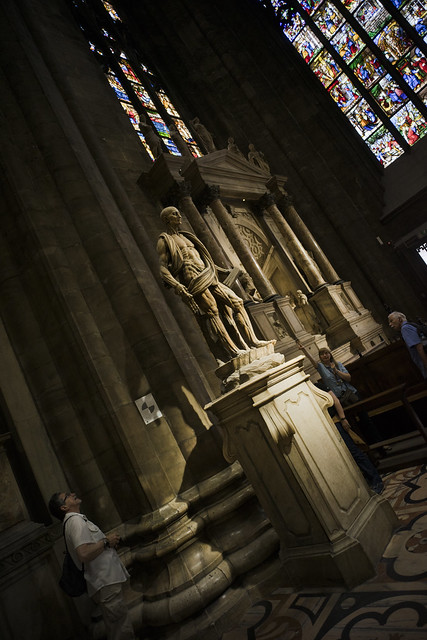 There’s a replica of the madonna (the one that’s spooking the horse). It’s covered in gold and guards an area that only a select few can get into. I suspect it’s the mascot of Fashion Week. 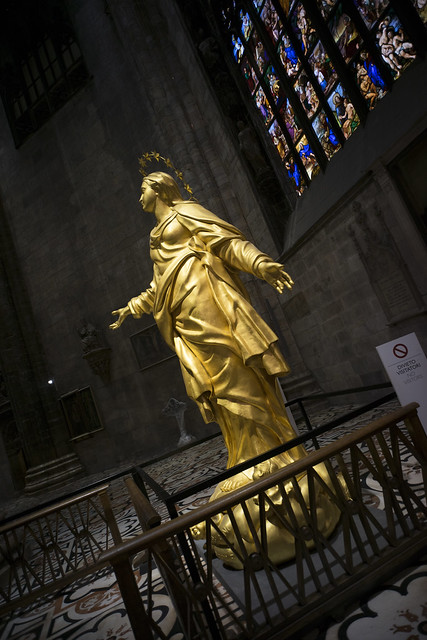 Speaking of gold and getting skinned alive, off the north side of the Piazza del Duomo is the Galleria, its entrance guarded by the Scylla and Charybdis of Campari and Prada, the original locations of both, so you can get something intensely bittersweet and then go and have a cocktail after. 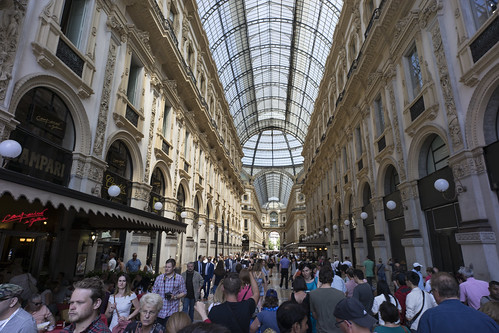 A view through it towards the south reveals the splendor not of the duomo – that’s at the east end of the piazza, with a western narthex as is normal – but the headquarters of Martini and Rossi. 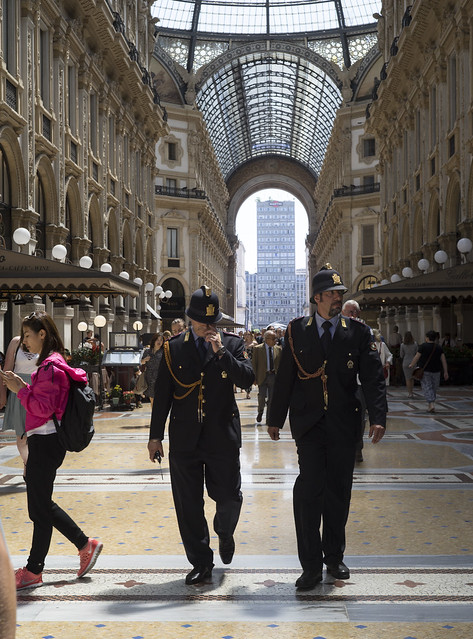 Keep an eye out for the fashion police, though.

Milan has always been a city of fashion. The term milliner for a hat-maker (formerly used more broadly of purveyors of women’s fashion) comes from Milaner, i.e., someone from Milan – which used to be said like “millin’” by the British.

And there is millin’ around, especially in the piazza, but Milan is really a city that is going places. At night it goes, perhaps, to the opera (I did not visit La Scala, so no photo of that); at day it gets around, by underground train or above-ground streetcar 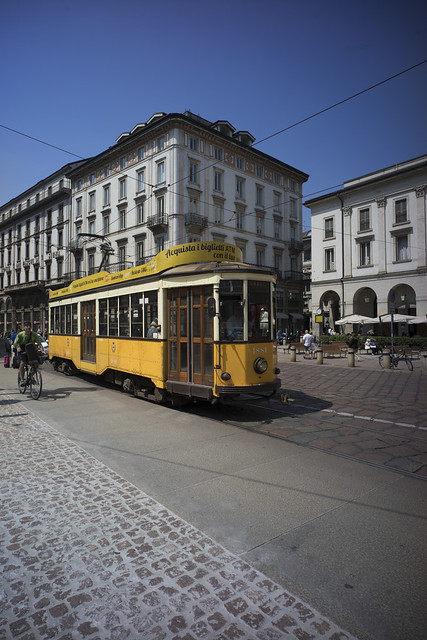 (most of which more modern than this classic one) or bike or simple perambulation. Or by car, though I can’t consider that the best idea. It goes shopping 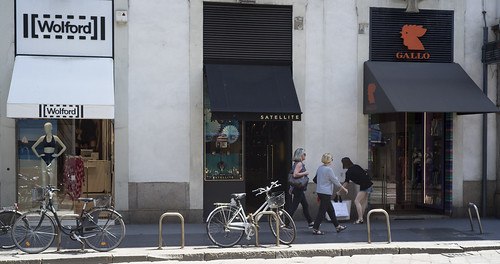 or for lunch, perhaps to have one of the city’s eponymous expansive breaded veal cutlets, 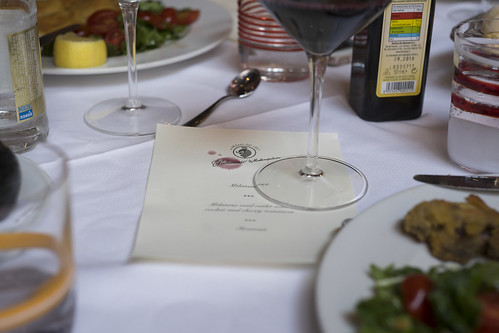 but it goes, above all, to see and be seen. 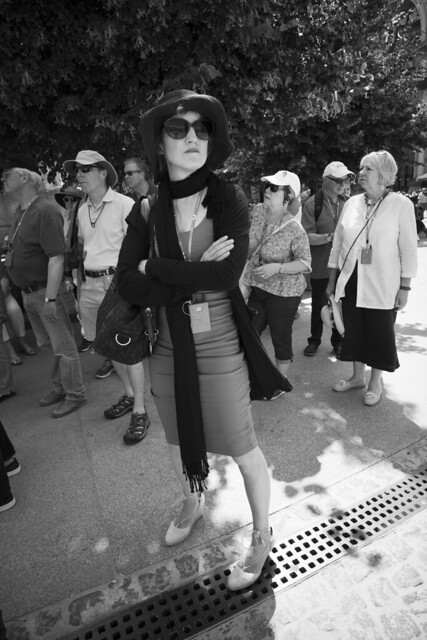 In some cities, the sightseeing is all about the things that don’t move. In Milan, it is, above all, about what does move. And eyes are everywhere. 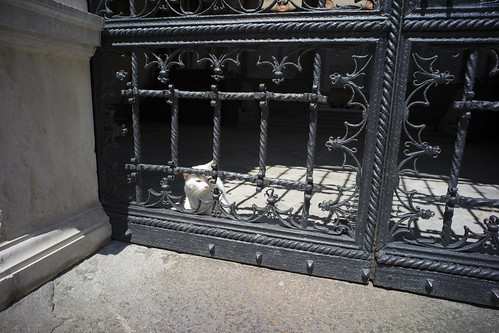