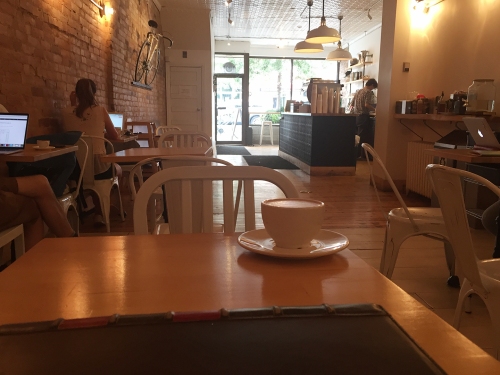 Everyone’s here to drink coffee and do work

Listen to the audio version of this on Patreon.

There are ten two-person wooden tables in The Good Neighbour on Bloor east of Christie and, as I sit here, eight of them are occupied, each by one person, each person facing towards the window (or, in the case of the four side-facing ones, away from the wall), and all but two of them have a MacBook open – and those two are looking at phones and pads. Almost everyone has an iPhone on their table too. The music is pleasant and nondistracting (unless you strongly dislike folk or mid-century schmalz). This is a coffice space.

It’s a long space, too. You can sit way up at the window on a white metal stool and watch the Koreatown traffic pass by, or you can plant yourself at the back with the new technoproletariat. One long wall is white; the other is brick so uneven and splotchy with the mortar that if you put a little placard on it with a title and a person’s name I’d believe it was art. The ceiling is white-painted pressed tin because of course. The floor is blonde boards that change to a different kind of blonde boards at the back. The flat whites are small and tight and cost less than the lattes. (You can split coffee joints into ones that charge more for flat whites than lattes and ones that charge less. Oh, and then there are the ones that don’t serve flat whites. To hell with them.)

A little blurry from shaky hands, but it does that lattes cost more than flat whites

There’s an air conditioner over the condiment bar; it’ll keep you cool while you’re adding cream. It doesn’t really reach to the tables. There’s a fan. It’s for the barista. If you were sitting close enough to it you could get the breeze off it, but it’s even farther from the tables than the air conditioning. There is a bench across from the actual bar, but like you’re just going to hold your laptop on your lap. I don’t think so.

The light is kinda dim. In case you ever wondered who would buy those lightbulbs with the bottom part silvered, these guys do, and screw them into sockets mounted perpendicularly on the wall with no shades or anything. I don’t know if it saves them any money, but it will save you a little battery, because your Mac’s camera will sense the lower light levels and will dim the screen accordingly.

If you’re mobility-restricted, you’ll encounter no major obstacles getting in or out of here. Don’t plan on using the washroom while here, though. This is an old Bloor Street building and so, of course, the washrooms are at the bottom of the stairway to hell. A screaming white low-ceilinged hell at that.

Even if you’re not sitting near the window, there’s some people-watching, because the walk-in traffic is reasonably steady. The median age here is surely under 30, though I don’t have the only grey hair in the place. The demographic is generally the same as you would find in any coffice space in Toronto that’s largely populated by MacBook users.

This is an outpost of a beloved Queen Street coffee joint. I haven’t been to that one yet. I’ll get there. Today I’m here. And after I’m done my work, I’m going to a craft beer place nearby. 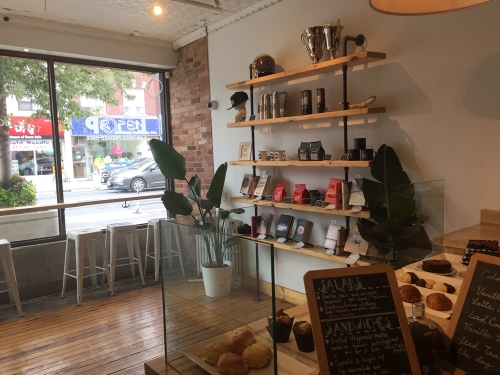 Bloor is just through the door

This entry was posted in Coffice Space and tagged Bloor Street, Coffice Space, The Good Neighbour. Bookmark the permalink.