Who are you, and who are you talking to?

Here are the slides from my presentation at the 2016 Editors Canada conference. I didn’t have a separate script, and I neglected to record myself presenting, so this is what there is to give you, but it covers the points; my speaking was generally expansion on the points.

Here are the slides, one by one. 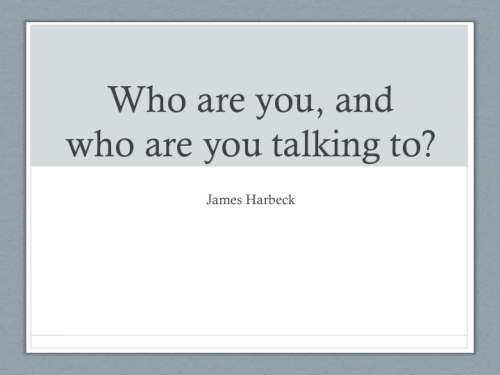 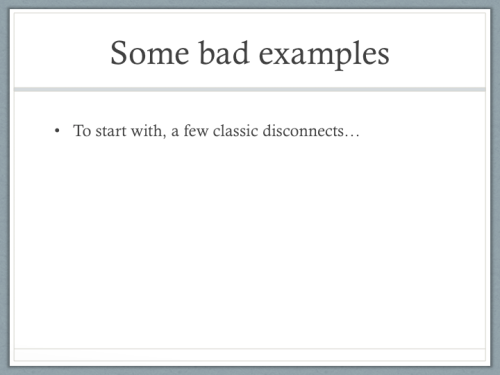 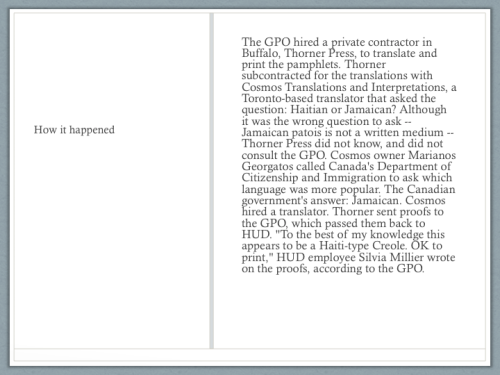 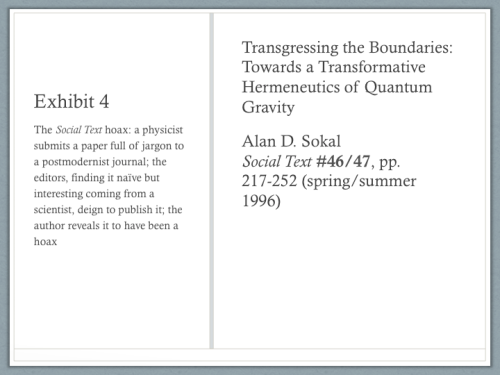 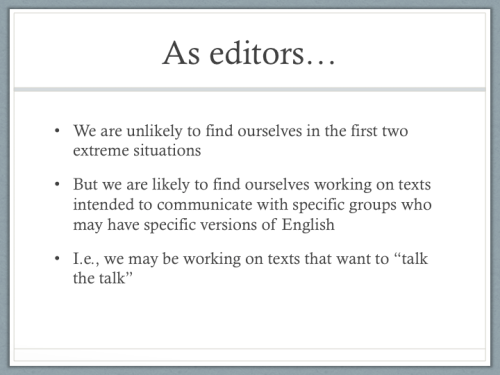 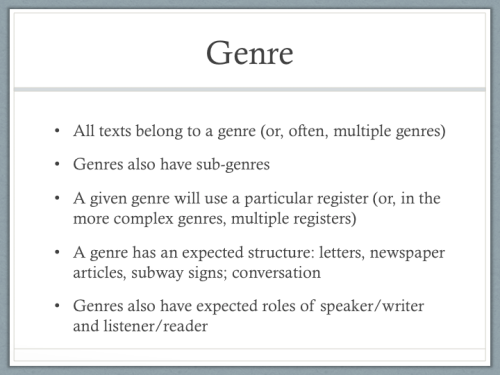 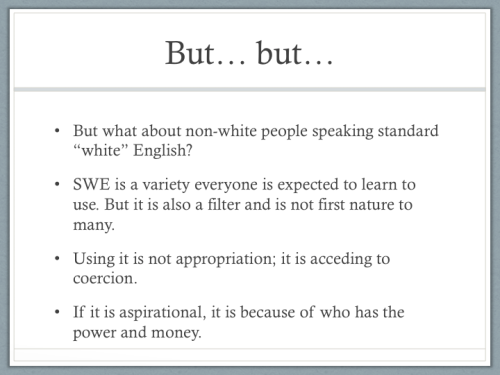 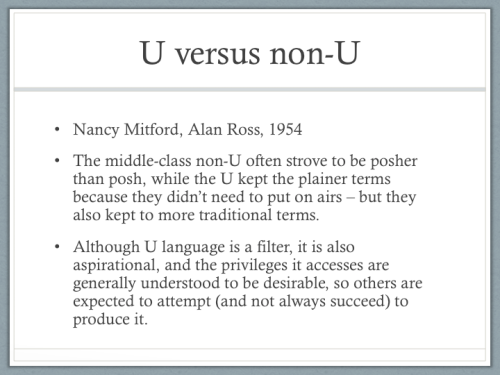 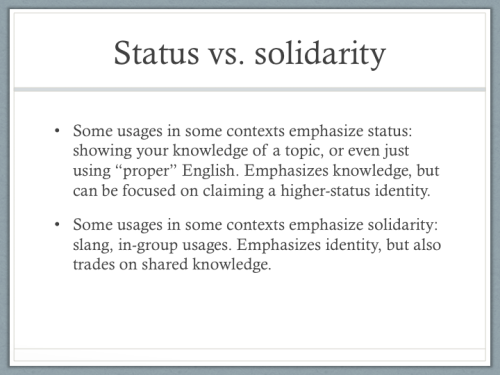 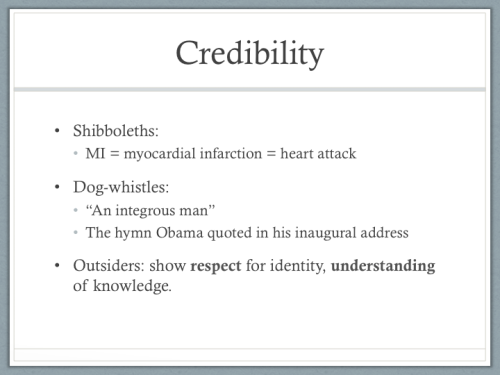 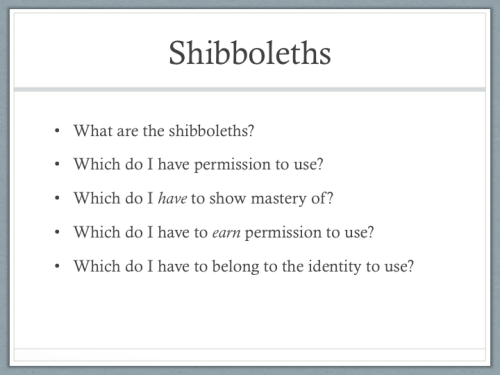 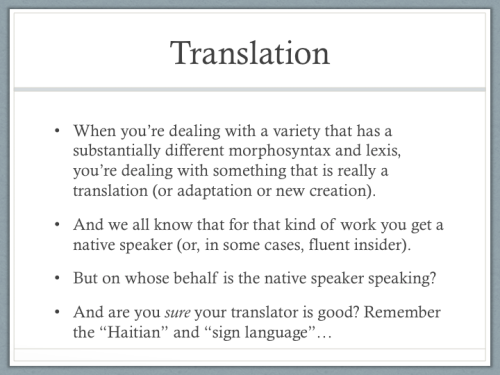 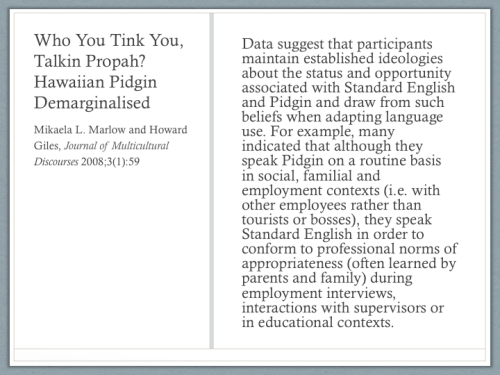 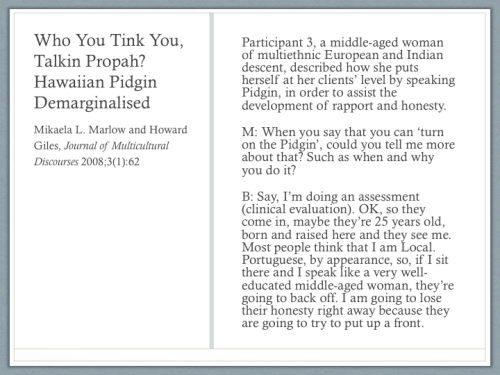 I think it’s time to feature another poem from my book Songs of Love and Grammar, saucy verse about romantic and morphosyntactic difficulties. This one revels in the rich depth and frank economy of lexis of a certain adolescent idiom. I have done you the favour of reading it in a video. You’re welcome.

I’m about to tear a strip off a guy who died in 2008. That may not seem fair, but what he did lives on, in his work and in the work of countless others who do the same damn thing. He presented his work as etymology, but it’s just plain baloney – or, as Daniel Cassidy would have said, béal ónna.

Daniel Cassidy would have said that because he was in the habit of saying that all sorts of American slang came from Irish. Slang can be very hard to etymologize, because it tends to originate in oral tradition, and so to show up rather late in print. But Cassidy was sure he had the skeleton key. He wrote a book: How the Irish Invented Slang. In it he looked at a variety of American slang terms, and explained how every last one of them really came from this or that Irish phrase. Stool pigeon was from steallaire béideánach (steall béideán being the related verb phrase), but stoolie was from steall éithigh, jazz was from teas, eighty-six from éiteachas aíochta, bunkum from buanchumadh, spiel from spéal… yes, really.

Cassidy’s method was fairly straightforward. He would seize on some slang expression and toss around for an Irish Gaelic phrase that sounded something like it (as the above do; teas is said rather like our chass, for instance) and had a meaning that could be tortured into supporting the connection – teas means “heat”, steall éithigh means “spout a false oath” – and then he would note that there were Irish immigrants in the area during the time that the phrase seems to have arisen, so it must be true. Never mind if the Irish source was never known to have existed as a stock phrase or cliché; never mind if it includes a rare word or an uncommon usage of the word; never mind if there was no reference made anywhere in history to an Irish origin; never mind if the phonological transformations he posited go beyond the expectable; never mind if there is a persuasive etymology pointing to a different source (as with bunkum, baloney and spiel). It makes a good story, it fits together, so it must be true.

Does this seem like shoddy methodology, nothing but hooey and blarney? Well, it is. A saying among linguists is “Etymology by sound is not sound etymology.” Think of the father in My Big Fat Greek Wedding coming up with an etymology for Japanese kimono from Greek kheimon. Pure “below knee”—oops, baloney. Give us a smoking gun: citations. A clear connection.

But why should it matter, if it’s a good story? Well, for one thing, it’s bad history. For another, the real stories are often more interesting. For a third, if you want facts, don’t you want facts? And fourth, sometimes it’s needlessly provocative, as with the claim that picnic and nitty-gritty are racist terms, in spite of more-than-ample evidence to the contrary. (Meanwhile, no one seems bothered by bulldoze…)

So enough with the blarney and baloney. Sound coincidences can be the spark of an investigation, but never more than that.

What flavour of English do you want?

This is taken from a presentation I gave at the Editors’ Association of Canada conference in Edmonton, June 2008. For the bibliography and a concise summary of some key points, see the handout (PDF, 72 KB)

I thought I wouldn’t call this “Register, collocation, and reflected meaning” because, well, that sounded a little dry. And I’m going to be starting into this subject with the use of a metaphor of sort. The metaphor I’m going to be using—and I think it’s a pretty viable one—is, as you may have guessed, that a piece of a text is like a piece of food. A document is like a dish. Words are like ingredients. END_OF_DOCUMENT_TOKEN_TO_BE_REPLACED