I really wanted to see my way clear to do another one from the bookshelf today. I had a vision of what it would be, which made it more difficult than just grabbing a book and opening it. But this volume came to light. 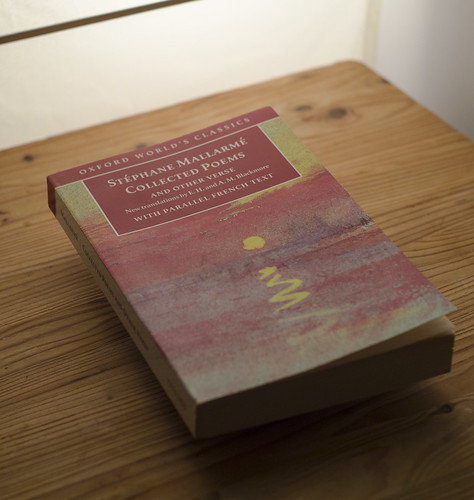 The cover illustration is a detail from Sunset, Rouen, by JMW Turner, who is a painter for those who love light, and glow, and impression, and paint. You do not always see the subject with perfect clarity, but you understand the feeling of it so much better.

The book, as you can see, is collected poems by Stéphane Mallarmé, a French symbolist poet who was 9 years old in 1851 when JMW Turner died. He was born Étienne Mallarmé, but he preferred a more directly Hellenic, less mutated version of his first name, a clarification without clarifying – for what does Stéphane or Στέφανος mean? (It means ‘wreath, crown, circlet’ and was the name of the first Christian martyr, so now you know.) His last name may suggest that he was poorly armed (mal armé) or perhaps badly teared (mal larmé), but those are tiers of resemblance on the base.

In this book you will find “L’Après-midi d’vn favne” (note the classicist use of v), which inspired Claude Débussy. You will find numerous other pieces of poetry as well. As the cover tells us, you will find them in parallel text: French and English, French on the left and English on the right, so that the meaning is clear. Let us open to a page. 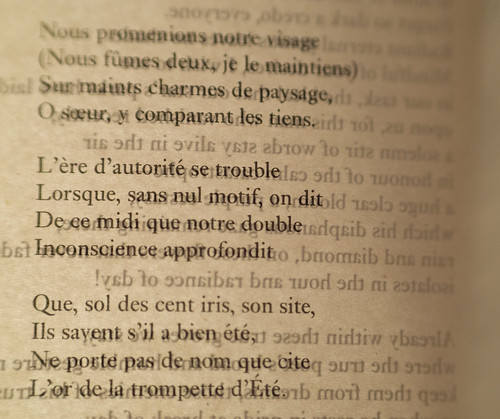 “Clear” is relative. A poem translated is a poem traduced. The denotation and the general feel can be preserved in large measure, but translation is truly no clearer than a page held up to a light. You see an obverse; the form is there, largely revealed but somewhat obscured; there is a different rhythm, different overtones, different references and plays on words; the speaker of one language has grown up with a different set of cultural references than the speaker of the other. I will not say it is through a glass darkly, but it is through a page, lit from behind… it seems clear, but it is… what shall we say… 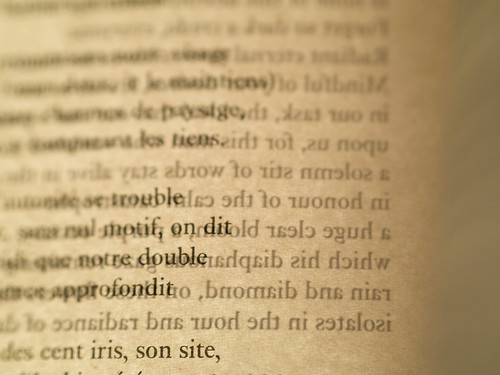 What is that word peaking through there, now, doubling up behind double? Half hidden, showing its back by way of the already yellowing flake of pulp? 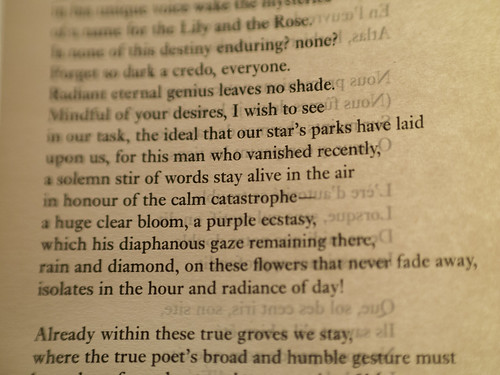 Yes, there it is, in “Funerary Toast,” the translation of “Toast funèbre”:

Mindful of your desires, I wish to see
in our task, the idea, that our star’s parks have laid
upon us, for this man who vanished recently,
a solemn stir of words stay alive in the air
in honour of the calm catastrophe—
a huge clear bloom, a purple ecstasy,
which his diaphanous gaze remaining there,
rain and diamond, on these flowers that never fade away,
isolated in the hour and radiance of day! 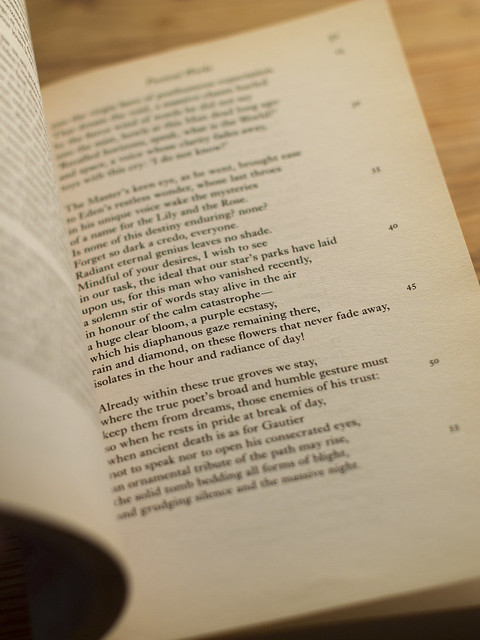 A diaphanous gaze. How can that be? Diaphanous means showing through, not seeing through. And yet. The word has taken on more of a meaning than it may literally seem to have. It is not merely to appear through something – dia δια ‘through’ and phanés ϕανης ‘showing, appearing’ – but to be a combination of epiphany and phantasm (both also from the same phan). It is not a word for ‘transparent’, even though transparent comes from Latin roots that mean the same as the Greek roots of diaphanous. A diaphanous dress is radiant, a diadem of clothing; a see-through dress is more revealing, and less high-toned; a transparent dress is… well, clear.

Sometimes this word is misrendered as diaphonous, because phon is a more common root. But phon refers to sound. A penetrating sound could be called diaphonous, I suppose, but the word is not used as such. When it comes to poetry, you may think that what is seen is what is heard, but this is not so: the wordplays in Mallarmé do not show so readily on the page. The letters open one window; the sound opens another. But in translation the window always has diaphanous curtains.

In art, we value the diaphanous more than the transparent. We love the word perhaps in part because it has that ph in the balance, that classical hallmark, that crisp and whispering couple that join to be simply soft. We want to see through, but we want to see the fabric too; we want to see the material, the medium. We want obscurity, a challenge, an involvement. We want not just Athena but also Diana and Aphrodite: our learning desires a hunt and hunts for desire.

We want life not through a glass darkly, but not through glass clearly; we want it through the fabric, the fibres, the medium, the texture of life. We want it with feeling. We want something to trip the light and make it phantastic. 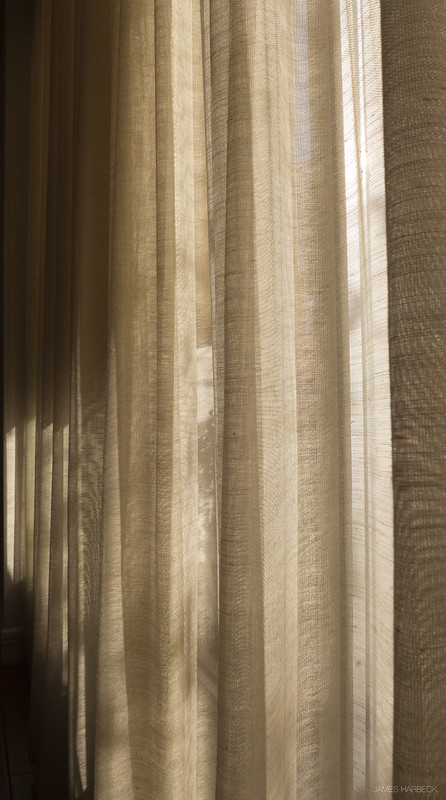