I grew up in southwestern Alberta, where the wind comes over the waves of mountains and keens across open brown hills. It is all horses, wheat, and cattle. Our jam came not in jars but in big metal tins: Empress raspberry jam, which I would eat in viscous lakes on buttered toast. Dig the spoon in, scoop, spread, it stays put. I’ve never understood drippy jam.

The nearest place fruit was actually grown was a vacationland for us: the Okanagan. It was a drive over the Continental Divide and through successive ranges until we finally met a warm valley with large lakes and ample orchards. There are towns with names like Peachland and Summerland. There is a long, deep, bendy lake, the sort you would expect to have a Nessie-like beastie (the beastie is named Ogopogo). The heart of the area is Kelowna; farther north is Vernon, a town whose name I’ve never fully reconciled myself with (there was a Vernon in my school who didn’t seem all that nice); but the truly quintessential fruitland name for me has always been Penticton. Somehow, this city at the south end of Okanagan Lake seems singularly fruity, or at least jammy.

You can see where I’m going with this. Yes, I think that pectin and Penticton are forever glued together in my mind with all those fruits picked in the valley and all that sugar packed into the jams. There are other echoes and overtones, of course, if I go looking for them: Pentax could be a brand of camera I took pictures with there (but it’s not – I’ve never owned or even used a Pentax); panic and impact are somewhere in the sound neighbourhood but seem entirely irrelevant; nictating winks but then blinks out; sticky connects as much with the sense; pectoral has a strong start but is not particularly more apropos than, say, pentacle. Nectar shows up late but is a welcome addition to the mix.

But keep an eye on that mix. This weekend I had a chance to observe the impact of excess pectin. My aunt-in-law Zaiga buys jam and jelly at a farmers’ market in Collingwood, on Georgian Bay, but the latest jar she picked up was a bit thick. She picked it out of the fridge and poked at it with a spoon: barely a pock-mark on the surface. Even when warmed to room temperature, it was… um… gluey. Here, have a look: 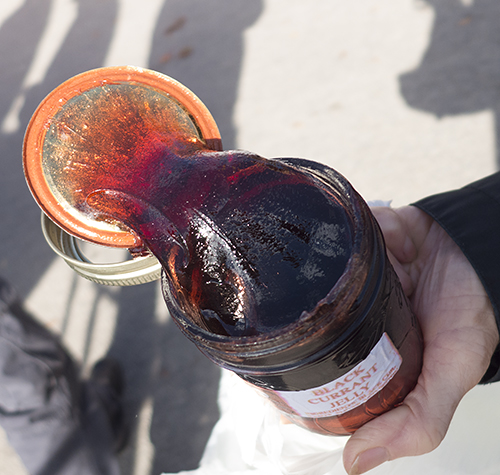 Now, yes, pectin comes from pectic, which comes from Greek πηκτικός péktikos ‘congealed’, which comes from the verb πηγνύναι pégnunai ‘make firm or solid’, but this was really a bit too thick. It looked like it could stay in the jar forever.

Which would, at least, make it Penticton, so to speak. The city is not a town (ton) named after some personage, perhaps a Captain Pentic, though the word has gravitated to a familiar English-style form; rather, it appears to come from a word in the Okanagan language (the local First Nation) meaning ‘a place to stay forever’.

Fair enough. A lot of people seem to be quite happy living there. But nothing is entirely forever; people come and go. And so do orchards. They still grow fruit in the Okanagan, but their most notable product now is the wine made from grapes grown where there used to be peaches.

Suits me fine. I didn’t have any jam or jelly with breakfast at Zaiga’s, but we did have some sparkling wine. That’s a holiday tradition I don’t mind sticking to.